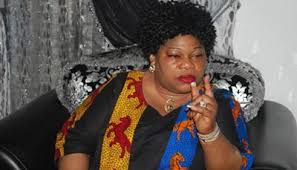 Fact has emerged why former Chairman of Nigeria Social Insurance Trust Fund (NSITF), Dr. Ngozi Olojeme decided to turned herself in for arrest and ongoing investigation into the alleged diversion of $48,485,127 from the NSITF’s accounts under her watch.

Recalls that the Economic and Financial Crimes Commission (EFCC) had earlier declared her wanted following her purported failure to honour invitation.

The Deputy Chairman, Finance Committee of the Goodluck Jonathan Campaign Organisation in the 2015 presidential election, was said to have fled the country shortly after her sack by President Muhammadu Buhari in 2015.

Olojeme, who was declared wanted the second time few weeks ago by the EFCC on the order of a court, was said to have turned herself in following advice by some security personnel close to her.

This was owing to EFCC’s clamp down on a former Managing Director of NSITF, Umar Munir Abubakar and four others who arraigned for alleged diversion of N18billion.

Some other NSITF officials who were arraigned are Henry Ekhasomi Sambo, Adebayo Adebowale Aderibigbe, Chief Richard U. Uche and Aderemi Adegboyega.

Olojeme, on getting to EFCC’s headquarters was subjected to thorough interrogation for hours over the alleged diversion of the fund.

BigPen Online recalls that her investigation was stemmed from a petition alleging that over N50bn from the Employee Compensation Scheme fund, paid by Ministries Departments and Agencies and private companies, as well as another N18bn being the contributions of the Federal Government as take-off grants to the NSITF, was allegedly mismanaged and diverted into the personal accounts of Olojeme and Abubakar.

The anti-graft commission, on the ground of the petition was said to have immediately set up a team of detectives to look into the allegations and into the bank accounts of the NSITF and allegedly discovered suspicious transactions and diversion of funds.