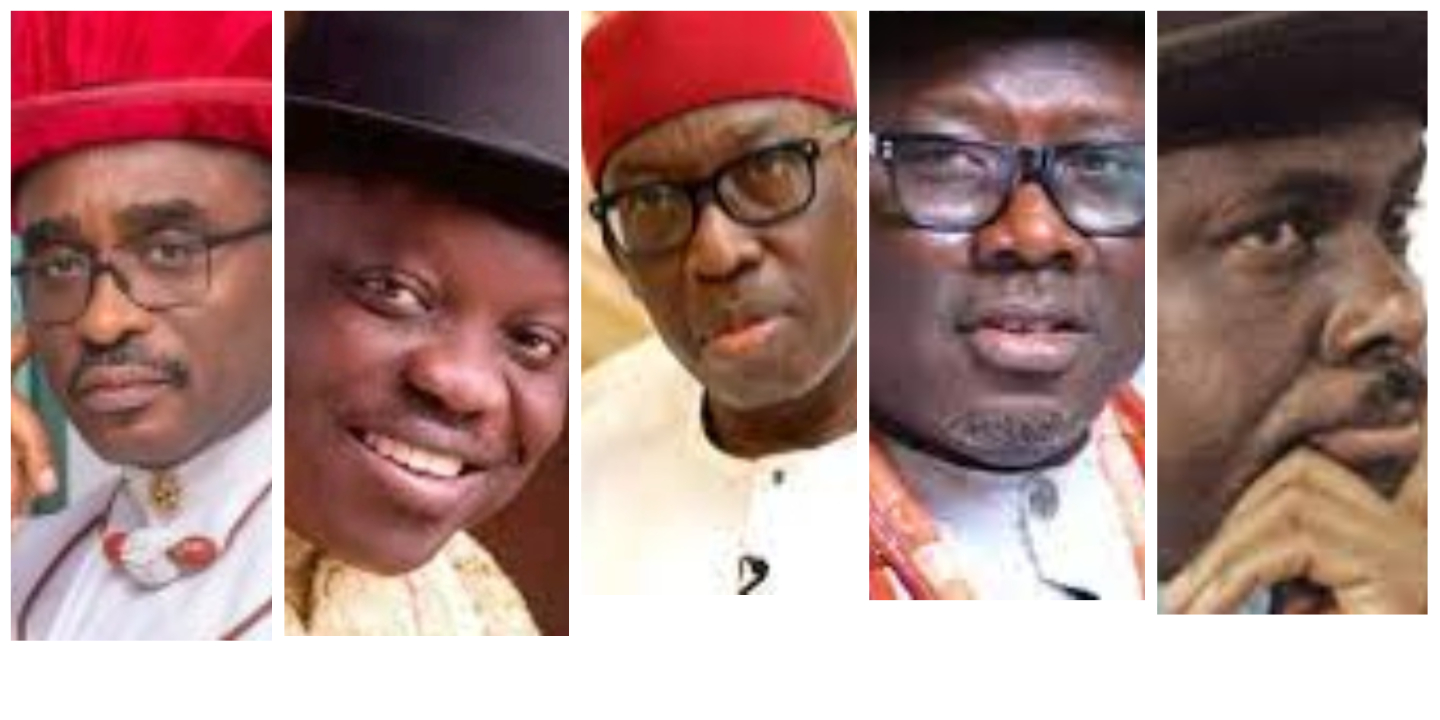 There appears to be no end in sight to the crisis engulfing the Peoples Democratic Party (PDP) in Delta State, as attempts by Olorogun David Edevbie to join the lawsuit filed by Chief Ikie Agwarianovwe, a candidate for governor in the party’s governorship primary, may have split the political camp of former governor Chief James Ibori and his successor, Dr. Emmanuel Uduaghan, who is now seeking support for all the candidates of the party.

According to www.bigpenngr.com, despite the fact that Ibori and Uduaghan are supposedly inseparable due to their shared bloodline, recent events in the state seem to indicate that both leaders are giving conflicting signals to their supporters regarding the best course of action in the political crisis.

Although it is thought that Ibori and Uduaghan supported Olorogun David Edevbie’s bid to succeed incumbent governor Dr. Ifeanyi Okowa, Uduaghan’s recent change of heart has further caused political camps to become divided over whether Uduaghan was acting as a forerunner for Ibori’s eventual endorsement of Oborevwori’s candidacy or was actually at odds with Ibori over the Edevbie case.

In a recent public appearance, Edevbie hinted that the fight was not yet over and that he was “still fighting” while thanking his supporters for sticking by him throughout the legal dispute that reached the Supreme Court. At that meeting, his running mate, Ossai N. Ossai, said they were “waiting for directives from their political leaders” (obviously referring to Ibori and Uduaghan) to enable them to know what to do next and that “the journey had just begun.”

Surprisingly, news and documents about Edevbie filing motions to join suit designed to remove Oborevwori as the party’s candidate started circulating a few days after he said, “The right decision that will benefit me and my team would be taken at the appropriate time.”

Another shocking political summersault occurred at the same time that the news was breaking, but this time it came from Udaughan’s side.

In an open declaration of support for all PDP candidates, including the governor who is running for vice president and the speaker, Oborevwori, who is running for governor, among others, the former governor had called a meeting of the leaders and stakeholders from Delta South.

Indicating that the former governor still has a firm hold on the political landscape in Delta South, the meeting was attended by several party bigwigs from that district. However, it was boycotted by former state secretary Comrade Ovouzorie Macaulay, senator James Manager, who represents Delta South, Ibori’s staunchest supporters, and the current deputy governor, Kingsley Otuaro.

The meeting was thrown off balance by Uduaghan’s declaration, which caught everyone off guard and made everyone wonder where the fight for the Delta PDP’s soul was going. Pundits continue to speculate as to why Uduaghan made the abrupt political turn, despite assertions and denials that Okowa was taking a hard line against his and Ibori’s political camp.

Some schools of thought held that Okowa was betting on the idea that he had built his own political structure independent of that of Ibori, which helped him come to power, and might not need the “old Ibori’s political dynasty” to succeed in his vice presidential race or appointing his successor, as Ibori did when he single-handedly installed Uduaghan, his cousin, as his successor against all known political odds.

But judging from Uduaghan’s most recent speech, it appears that some “water must have passed under the bridge” because, as he said, “a lot is going on but I don’t want to go into details” (apparently alluding to the argument that broke out between Ibori and Okowa over the successor’s muddle).  The former governor would rather play the role of an elderstatesman and follow the path of reconciliation than act as the middleman and encourage conflict.

He explained to the somewhat perplexed party faithful in attendance that the meeting was reconciliatory in a number of ways before switching to pidgin and pleading: “I want to beg of you. Make we be like water. Water no get enemy. When you quarrel, fight and God say this is what I want, let’s respect that position.”

Uduaghan continued by acknowledging that the party was in crisis, but that it was time to put the sword away in order to win the state in the general election in 2023. He explained that there were bound to be issues in a family, but that did not mean members should begin to kill each other.

According to him, “We have no option but to support him (Okowa). Nobody has held that position (Vice President) from our state. According to pundits, Okowa does not deserve support based on Uduaghan’s claim, but he should be given it because there was no other choice.

“We must all come together and deliver our candidate. I am saying this with all seriousness and from the button of my heart. I am old enough in the politics of Delta State to assess people so I know those who are sincere and those who are not sincere.

“It will benefit us more to deliver our candidate than deliver a candidate of another party. I am saying this from experience and that’s what will happen. If you deliver a new candidate he will satisfy his people first before you”.

Another key point from Uduaghan’s remarks was his admission that Ibori was the state party’s national leader and that eventually everyone would follow his decisions.

“We must all line behind him and give him the maximum support. Ibori is our national leader. Virtually all of us are still members of that family”, he was quoted to have said.

However, some political observers in the state are still perplexed as to how Uduaghan could make the claims that working against the People’s Democratic Party (PDP) in the state will be morally, spiritually, and devilishly wrong despite what many have experienced at the hands of Governor Okowa, including himself who was denied the opportunity to have his daughter run for the Warri North Constituency seat at the state Assembly.

A political ally of Ibori’s, Ighoyota Amori, revealed that the former governor was on the verge of endorsing Oborevwori’s candidacy while Ibori has kept a deafening silence about the developments. Some political observers believe that Uduaghan might be reprising the role of John the Baptist even though Ibori’s body language appears to be different. Okowa’s supporters, on the other hand, rejoiced in the turn of events as Uduaghan’s public statement had emboldened the Oborevwori camp despite the fact that Edevbie’s joinder case was still pending in court.

On the other hand, Edevbie, who finished second in the Peoples Democratic Party (PDP) governorship primary election in Delta, has stepped up his game to overtake Oborevwori through legal means.

Edevbie requested to be added as the fourth defendant in the lawsuit filed last Wednesday at a Federal High Court in Abuja between Chief Ikie Aghwarianovwe, the plaintiff, and the Peoples Democratic Party, Oborevwori Sheriff Francis Orohwedor, and the Independent National Electoral Commission, who are the first through third defendants, respectively. The case number is FHC/ABJ/CS/1857/2022.

“As counsel, on behalf of the applicant, you shall pray to the court as follows: an order joining the applicant David Edevbie as the 4th defendant in this suit . And for such further or other order (s) that this honourable court may deem fit to make in the circumstance. “

Tayo Oyetibo, SAN, the lead attorney for Chief Edevbie, listed ten reasons for the application in the motion he filed. He claims that the applicant, plaintiff, and second defendant are all individuals who ran against the first defendant in the primary election for governor on May 25, 2022.

“On the ground that the 2nd defendant submitted false/forged information and documents in relation to his constitutional requirement to contest the 2023 election to the office of governor of Delta state , the applicant is aggrieved by the 1st defendant’s submission of the 2nd defendant’s name as its governorship candidate

“The applicant has filed suit no FHC /ABJ/CS/2033/2022:David Edevbie V. Sheriff Orohwedor &2 ors. The counsel said the applicant sought disqualification of Sheriff as candidate of the party for the coming governorship election next year in the suit.

“The applicant has a fundamental right to be heard by the court in the consideration of whether the 1st defendant should be disqualified under section 29(6) of the Electoral Act 2022.”

In a written address in support of his originating summon, the applicant is seeking the determination of the questions set out in the body of the Originating Summons to wit.

1.02. The gravamen of the Plaintiff’s claim before the Honourable Court is simply that going by the information personally supplied to the2nd Defendant and contained in the Expression of Interest Form as well as the Nomination Form, and other sworn affidavits, the 1 Defendant clearly and indubitably falsified the information thereon especially as touching his age and name. Further, the 1″ Defendant forged/presented a caricature WAEC results bearing the name of someone else entirely. The Plaintiff, therefore, prays for the disqualification of the 1″ Defendant on grounds as captured under section 29(5) of the Electoral Act, 2022 (as amended) and section 182(1)(1) of the Constitution of the Federal Republic of Nigeria, 1999 (as amended).

1.03 The Plaintiff is seeking, In the main, that consequent upon the disqualification of the 1st Defendant by the Honourable Court, he should be declared the lawful winner of the 2nd Defendant’s Delta State Governorship Primary election in which he fully participated and polled the second highest votes [the highest number of lawful]. Further to the foregoing, the Plaintiff is also seeking that the 1 Defendant’s name be replaced/substituted for his own name as the lawful and qualified candidate or flagbearer of the 2nd Defendant in the 2023 Gubernatorial election in Delta State.

2.01 The Plaintiff herein shall adopt the questions nominated in the Originating Summons as the issues which call for determination in this suit and shall seek to proffer wholistic arguments thereon in support.

2.02 For the avoidance of any doubt, the questions are reproduced hereunder:-

“Oborevwori’s Candidacy Is A Bad One For Delta State, It Exemplifies Incompetence Of Okowa’s Govt” – Omo-Agege Unleashes Yet Another Salvo