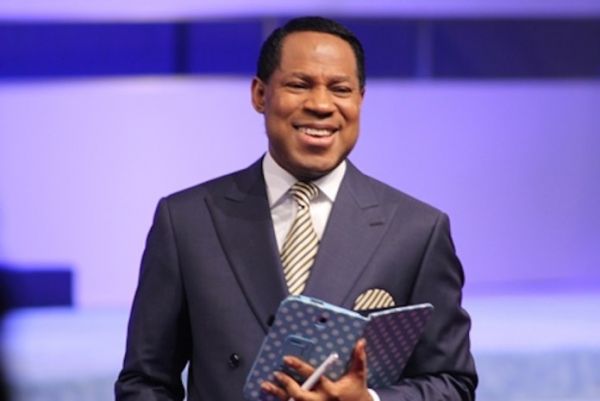 The church have been in the centre of the messy land grabbing scandal, which became public knowledge few weeks ago after the Ibafo landlords staged a peaceful protest, calling on both the federal and the state government to speedily intervene in a brewing land crisis, which could trigger upheaval in a matter of days.

The protesting landlords, who raised the alarm during the protest staged at the main entrance of Christ Embassy’s camp ground in Asese community, Obafemi-Owode council area of Ogun State, recounted a history of their perpetual oppression by representatives of the church.

The landlords, wielding placards, with all sorts of inscriptions, including “Oyakhilome leave our land alone”, “Land grabbing is a sin, stop harassing us”, “Christ Embassy don’t cause religious crisis in Ibafo” and many others, also called on the Ogun State government, as well as the federal, to investigate the motive of churches that acquiring vast lands in the area.

It was gathered that the provocation reached a crescendo on Thursday, May 5, 2022, when the church’s representatives stormed the site of an ongoing building works, belonging to CityCode Mortgage Bank Limited, with two policemen and more than 60 thugs, wielding all sorts of dangerous weapons, wounding and whisking many workers on site away.

According to the protesters, trouble started when assailants stormed the company’s work site, started shooting sporadically, descended on workers and anybody in sight, beating and using harmful objects on them and forcefully dragging into vehicles they came with.

The commotion and shooting sent panic throughout the community, prompting some of the landlords and residents to resolve that the constant harassment must be stopped.

Among those caught up in the violence were Ola Opeyemi and Sunday Abiodun, labour hands who sustained serious bodily injuries; Pastor Samuel Olusola and Raymond Dennis, among others.

One of the contractors on the project site, Dime Owei, who said some of his labour hands and assistants were victims of the attack, added that the disruption led to a huge financial loss to him as all the materials already prepared for use, including a mix for concrete, with more than 50 bags of cement, were wasted that date.

Matters started snowballing into a crisis when the church, after making attempt to acquire more land from some owners, including the Salami family, which had already sold its properties to CityCode, turned down Christ Embassy’s offers, telling them there was no more land to sell.

Mr. Azeez Salami, a descendant and head of the Salami family, who shed light on the crisis between CityCode and Christ Embassy, said the company had acquired almost 16 hectares of land from the original owners of the areas since 2004, adding that virtually all the land occupied by residents of the community was originally owned by the company.

“Our fathers sold this land to CityCode since 2004 and there been no dispute to that, until Christ Embassy came to tell us that they were having a dispute with Redeemed and that after their settlement, they were assigned a swathe of land towards this side

“They came with a surveyor, one Alhaji Fatai, an agent, Alhaji Lukmon Ogooluwa, from Abeokuta. They surveyor started from the expressway, talking with different families; Gbadamosi Akinrinola family, Mesioye Family, then us, the Salami family. They moved on to Obafunke family and after all they discovered that we had not much than seven acres from our own family, after CityCode’s fence.

“From all the families, they got about 100 acres from the various families. We couldn’t give more than seven acres because our fathers had already sold our land to CityCode. At some point, one of the pastors of Christ Embassy approached us that they were interested in buy from CityCode’s land, that they heard the company wanted to sell. They met like three times, but since there was no agreement, there was no sale.

“In trying to forcefully take the land, the church has twice pulled the fence built they CityCode’s down; once in 2019 and again with swamp boogie in October 2021. Till today, we have not heard that they rebuilt the fences or paid compensation. This last Thursday’s assault is the straw that broke the camel’s back. If I had been around, maybe it would have been bloodier”, he said

Emmanuel Ndubuisi Osuwa, General-Secretary of the estate, said despite the fact that the community had initially taken the Redeemed Church of God to court over an alleged trespass matter, Christ Embassy came to mark their building for demolition, adding that some had already been demolished.

According to him, all landlords hold their legal titles to the lands they occupied, expressing surprise at the sort of underhand and brute force so far employed by a church to dispossess lawful owners of lands of their rights.

“Recently, Christ Embassy came and marked some properties for demolition and I personally took them up that this matter is in court, they ran away. We heard they came again last week with police and all the rest, claiming to own even CityCode’s property and I started wondering what all these churches are all about these days. I can’t understand how church could be pretending.

“The other time they came and claimed they wanted to link the other part of their land because their G.O, Oyakhilome, lives behind there. We initially stopped them, but we thought allowing them to do a road, not knowing they had an ulterior motive. That’s church for you, very deceptive. My appeal is to government to check these so-called churches.

“There are some among them who will buy land in the name of the church, but they actually share the lands among themselves to resell and make so much money. I have seen that in Redeemed very clearly. Government should rise up and checkmate these people because this can lead to crisis.

“We all have titles to our properties, I know not less than ten landlords here with their valid C of O, I have seen them, so what are they talking about?”

Mr. Matthew Adedayo Eyinade, whose first house was initially demolished in 2009, said his house and many others was again marked for demolition by Christ Embassy’s agents in 2020, adding that many members of the community had lost loved ones to the incessant harassment and oppression from the church.

Alhaji Momoh, another landlord in the community, alleged that the churches in the area are bent on setting the area on fire by their actions, believing nothing will happen, calling on government

“These churches, Redeemed and Christ Embassy, are trying to provoke us, believing we are helpless and nothing will happen. I’m a retired civil servant and I know what it took me and how many years to build this house. We are free with CityCode, which was magnanimous enough to stay because from the record we have, they have the C of O of this area. We are not supposed to have any issue with any church, apart from CityCode.

“All of a sudden, they came around again to claim CityCode’s land, in the name of church. They want to make it a religious affair and some of us who are Muslims in this estate have our own plan, by the time we start carrying it out, this place will become ungovernable, there’ll be fire because we don’t have anywhere to go to.

“They just, all of sudden, came with trucks of thugs and police, harassing and molesting people working on CityCode’s project, took them away. When we got to know it was Christ Embassy, we were all shocked. Some of us are close to 70 years and there’s nothing to be afraid of again. Government needs to comes in now to halt this crisis”, he warned.

The traditional ruler of Ibafo, Oba Qozim Alabi Alayande, noted that the crisis was as a result of the fact that the church’s first agent, Alhaji Ogooluwa was unable to get the size of land he was paid for, hence the attempt by their new agent, known as Elele, to use all sorts of means to acquire more land in the area for the church, thereby trespassing on lands in the area, including CityCode’s land.

He, however, said he had warned that he does not want any land dispute in his town, adding that he had called for settlement.

Meanwhile, when reached for comments, an Executive Director with CityCode Mortgage Bank, Mrs. Bola Egharevba, explained that the company had made efforts to reason with the church and its representatives, but all efforts had been thwarted as they have consistently violated all promises made to remedy damages caused or refrain from encroaching of the company’s property.

According to her, all correspondences had been ignored by the church, adding that the latest aggression and violent activities of the agents of the church had been documented and matters would be referred to court soon.

“They have consistently encroached on our property. This is a land we bought since 2005 and for one reasons of the other, development took time to take off. When we discovered that some individuals had started developing some part of our land, to prevent further encroachment, we fenced the remaining part, only for Christ Embassy, which came much later to be attempting forceful takeover.

“We have written then more than once and reported the matter to the police. We even had an interface with their Secretary when their swamp boogie fell our fence and he promised to act, but till now, neither have they repaired the fence not pay compensation. I was shocked when I heard of the crude and crooked attack on our workers last week. We are not going to leave them this time around, a matter will soon be instituted in court”, she vowed.

Meanwhile, the only official of the church available, who came out to address the protesters, the Chief Security Officer (CSO), Ighodalo Ozazuwa, refused to speak to journalists, saying “they will attend to you guys, I didn’t call the press”.

Reminded that the community had said a lot of things against the interest of the church, Ozazuwa said “I won’t respond. The matter is in court and it’s being handled”.

See Warri And Cry: Tale Of Oil City’s Fall From Grace To Grass