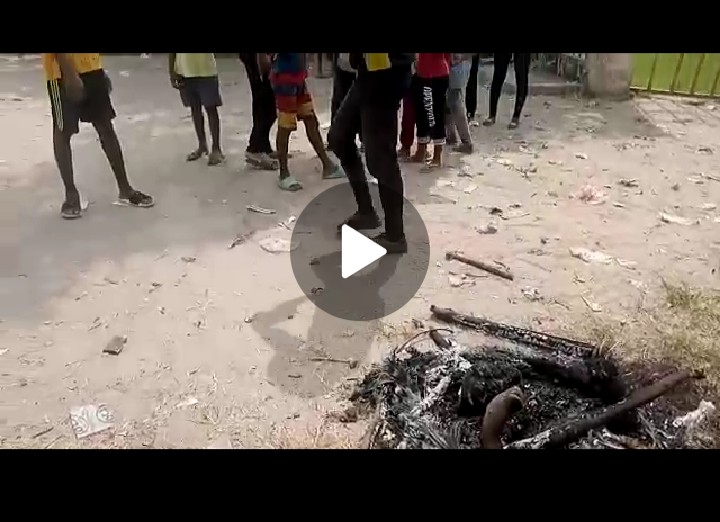 26
SHARES
319
VIEWS
WhatsappShareTweetLinkedinTelegramSubscribe
An unidentified man who disguised as a mad man has been burnt alive by angry mob who suspected him to be a ritualist in Ughelli, Ughelli North Local Government Area of Delta State.
BIGPENNGR reports the man reportedly posed as a mad man around Otovwodo Primary School in Ughelli.
Some residents had gone to patronize a merchant that deals on all kinds of second hand items when they saw the suspected ritualist.
A witness disclosed that the supposed mad man was lurking around the vicinity with an expensive Android Phone on his hand which raised suspicion of people around the place.
An eyewitness said that wondering how a man could he holding such an expensive Android Phone, some persons had tried to approach the supposed mad man.
But apparently sensing danger, the supposed mad man quickly pulled out the SIM card in the phone and swallowed it and began to flee.
His action was said to have raised more suspicion about who he was as some persons gave him a hot chase.
The source said; “Everybody was surprised, how can a mad man be using such expensive Android phone? At first people thought he might have stolen the phone from somebody among the crowd, but when he started running and swallowed the SIM card, it became clear that he was not a mad man.
“He was caught and they began to beat him to get information from him, however, in the process of beating him, some persons came and said that this same mad man was arrested about two weeks ago by the police and was taken to the Ughelli Police station after he performed the same act of swallowing a SIM card when he was caught discussing on the phone with someone about selling body parts.
“On hearing this, that he was arrested and released, the mob got angrier and set him ablaze immediately to avoid the police or any security agency from rescuing him.”
Collaborating what the first witness said, another witness, a tricycle operator who crave anonymity said, “I was arrested with this same boy two weeks ago. We were taken to Ughelli A division. When we got to the station, they discovered, from bank messages on the phone that he was having over N12 million on his bank account.
“I was released few hours because mine was licence issue so I did not know what happened next. I was surprised to see this same mad man few days later still pretending to be mad.”
Another witness alleged that the suspected ritualist after being arrested by the police some time ago was returned at a palace of a traditional ruler after allegedly paying the sum of N500,000.
“That day he was arrested to the police station, but was later brought to be palace, although I don’t know why, but when they brought him to the palace some persons said they should burn him. Instead of burning him, they let him go after paying N500,000”, the witness alleged.
When contacted the Delta State Police Public Relations Officer, DSP Bright Edafe said he was not aware of the incident.
“I am not aware, I am yet to confirm it from the Ughelli Division”, he said.
26
SHARES
319
VIEWS
WhatsappShareTweetLinkedinTelegramSubscribe
Related Topics:
Up Next