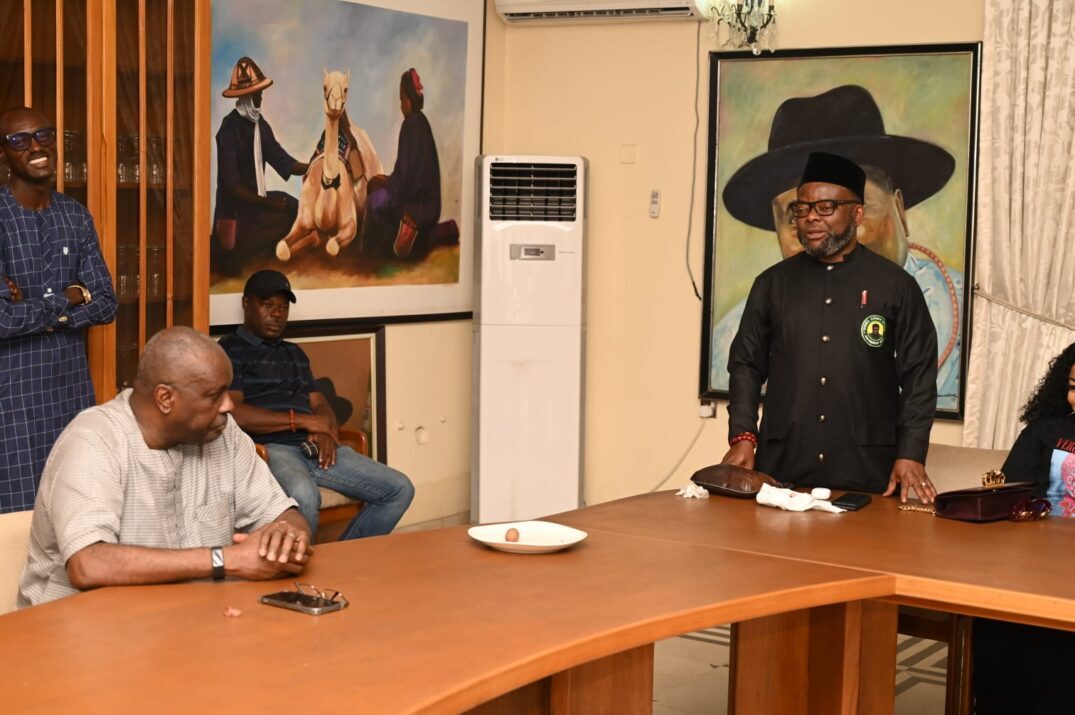 Comrade (Chief) Sunny Ofehe, a governorship candidate under the Young Progressive Party (YPP) in Delta State, has said that he urged the former governor of Delta state, Chief James Onanefe Ibori, to take on the role of an elder statesman by supporting each governorship candidate equally rather than to beg him to support him or adopt him as his candidate.

BIGPEN NIGERIA (www.bigpenngr.com) reports that there have been speculations that Ibori may adopt another candidate of the opposition party as his candidate since his choice PDP guber aspirant, David Edevbie could not make it as the party’s standard bearer.

The rumour became palpable over the weekend after some members of the Delta Unity Group, (DUG), a political pressure group that was pushing for Edevbie’s candidacy, pitched tent with APC governorship candidate, Senator Ovie Omo-Agege.

This is coming few days after Ibori had a closed-door meeting with Ofehe in his ancestral home, Oghara, Ethiope West Local Government Area of the state, a development which had set tongues wagging.

Ofehe stated that he was at Ibori’s place to seek his fatherly advice as a man who is well-respected in Delta State politics and to advance his campaign for governor of the oil-rich state in the March 11 general election of 2023.

He noted that Ibori, despite being a PDP chieftain, is anticipated to play a significant role in mobilising key players and gladiators as a statesman toward the election of the state’s new governor in 2023.

In his remarks to Ibori, Ofehe urged him to use his connections to create an environment where all potential governorship candidates of Delta State could present themselves and what they could bring to the state in the run-up to the state’s March 11 governorship election.

The YPP guber candidate said that the government of Delta state was underutilizing the state’s potential in terms of its human and natural resources.

He also expressed displeasure that, as the nation’s top producer of crude oil, Delta state was expected to compete with Rotterdam in the marine industry and establish itself as the nation’s maritime hub.

Ofehe, an activist of international repute, said that if elected governor in the general election scheduled for March 11, 2023, he plans to capitalise on the business opportunities in the Ethiope River, the deepest river in Africa, and turn it into a hub for domestic and foreign tourists.

He said that while Delta state was richly endowed with a variety of potentials, it lacked strong leadership, and consequently, successive governments have not been able to capitalise on those enormous potentials to improve the lot of the people.

In his own words, “There is no place in the world where I have seen four sea ports within a radius of a 110-kilometer distance from one another and the state is not benefiting from it. We have what it takes to rival Rotterdam and perhaps even take over as the world’s centre for maritime activity. Our coastline is 165.12 km long, but we haven’t dealt with the fish or other marine possibilities yet. I was in the Gbaramatum Kingdom, where despite the fact that we are the nation’s largest producer of crude oil, the residents lack access to basic water supplies. We passed through numerous oil wells, flow stations, and manifolds while I was there. Nigeria is currently the eighth largest crude oil exporter because we are the largest producer of crude oil.

“I told my people in the car as we approached that the Ethiope River is the deepest inland waterway in all of Africa. It is regrettable that we are not utilising the commercial opportunities that are available to us in this area of the larger picture.

He said that Delta State shares the same typography as Rotterdam, which has the highest concentration of tank farms worldwide despite not producing crude oil and the busiest port in the world. He asserted that with the right leadership, the state’s four seaports can be revamped and put to proper use through FDI.

According to Ofehe, a Netherlands-based Nigerian environmental rights activist with more than 30 years of experience in the civil society sphere, when Shell, Chevron, Mobil, Exxon, and Agip first entered the country in 1958, they promised to turn the oil-bearing states into Rome, Paris, Amsterdam, and New York, but “60 years down the lane, what we have is increased poverty and increased environmental degradation, and these are sad realities.”

Ofehe said that after “all the possibilities I tried to bring in through people that I know in government fell on deaf ears,” he made the decision to run for office out of his passion for bringing about positive change in the state.

He stated, “I just feel that it is time for me to come and serve through the ballot in the 2023 election, using the knowledge that I have accrued in my 27 years, the experience that I have acquired, and the exposure.”

Ofehe described his relationship with Ibori as that of “father and son,” adding that the purpose of his visit was to urge Ibori to take on the role of an elder statesman by supporting each candidate equally rather than to beg Ibori to support him or adopt him as his candidate.

“I’m not here to plead with my leader that you should cast your vote for me, I am not here to say I have to be your candidate because I clearly understand you have a political party of your own.” The beauty of democracy is that it offers us as a people the platform for everybody to come and show before the electorate what they have and intend to do in the next four years after the election.

Ibori’s name, according to him, is synonymous with Delta politics. “Even in international meetings, when I tell people outside of this country that I am running for governor, even to some of the white men who understand Nigeria very well, they keep asking me have you met Chief Ibori,” he said.

He recalled how he met Obasanjo in Dublin in 2019 and he asked him to see the former governor as one of key stakeholders that controls the political situation in the state.

‘When I visited this country in 2018–19, Chief Olusegun Obasanjo prayed for me, held me, and said, “Whether people like him or not, there is one man you have to meet.” He then mentioned my father, Chief Ibori. That was 2019. Since you know I’m your son and allowed me to come, you avoided playing politics with my request to see you, which is further evidence that you’re not just a political leader for your party alone but a political leader to all of us. Today I’m here once more, and first of all I want to thank you for giving me this rare opportunity to see you.

‘The last time I called you, you were not in town, so I said I couldn’t start this race and would not be comfortable if I didn’t get your blessings because you had walked that path.” You have seen it all.

‘So, whatever happens on March 11th, whoever is elected governor of this state owes it to you to join him in putting his manifesto for this state into action.

He bemoaned the fact that Delta State would already be bankrupt if it were a company in its current financial situation and urged him to continue working to save the state by supporting a leader with international exposure, potential, and contacts to withstand any potential future recessions.

Ofehe assured Ibori that, if elected governor, he has the power to draw in $26 billion in foreign direct investment to revitalise the state’s economy and generate wealth for its citizens.

In addition, he pledged to provide 1 million state residents with a minimum of N10,000 in social benefits, which he said had been closely examined and modernised to tailor the Netherlands Social Benefits Programme.

He said that the programme would specifically target senior citizens, physically challenged individuals, and mothers in an effort to lessen their suffering.

How I Was Falsely Accused Of Rape By 19-year-old Lady, Got Acquitted – Warri Bishop Opens Up