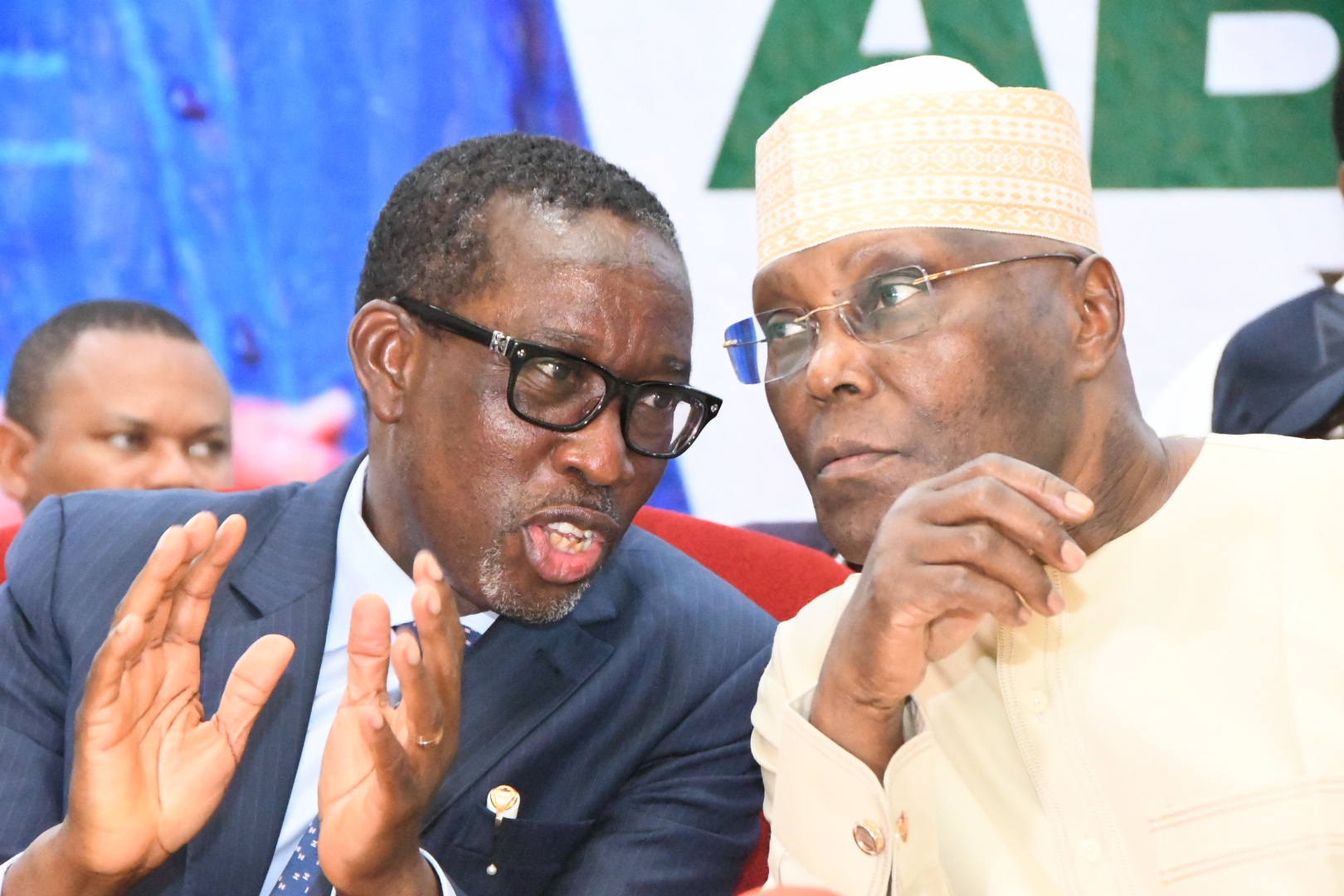 Our attention has been drawn to a write-up titled: THE MANY PEOPLE GOVERNOR IFEANYI A. OKOWA HAS BETRAYED and after reading through thoroughly, critically, and dispassionately, we have come to the following conclusion:

1. The entire write-up is deviously targeted and intended to STOP Governor Ifeanyi Okowa from becoming the Vice Presidential running mate to Alhaji Atiku Abubakar on the PDP Joint Ticket for the 2023 presidential election. This is the pure, simple, and wicked truth. Of course, they tried the same crude, tired, and predictably puerile tactic of trying to invoke unnecessary childish sentiments and empathy before the Delta State PDP Guber Primaries, which failed woefully, so their pattern is already familiar.

2. One thing we must however remind those who are trying to STOP Governor Ifeanyi Okowa from getting the PDP Vice Presidential nod is that POWER COMES FROM GOD AND HE WILL GIVE IT TO WHOM HE DESIRES, IN HIS OWN TIME AND AT HIS OWN PLEASURE. NO MAN CAN CHANGE THAT.

Buhari ran for the Presidency three times before he got it; Atiku is contesting the Presidency for the sixth time this time,  Ibori contested during General Abacha’s transition and failed before becoming Governor in 1999; Okowa himself failed in 2007 before clinching it in 2015. Power comes from God and if Governor Okowa will be Vice President, then all these petty and hateful writings will not change the Will of God. In all things, win or lose, we must Give Glory to God.

Ecclesiastes 9:11 says: “The race is not to the swift or the battle to the strong, nor does food come to the wise or wealth to the brilliant or favour to the learned; but time and chance happen to them all.” Some people paid =N=100million to buy nomination form and still got zero vote, despite all their boasting and even of the divine revelation by God that they will win. But the fact that power comes from God doesn’t mean we should not try. Every effort has its own reward because God is not man.

3. We also realized after reading that write-up that some people actually have this outdated, illiterate, kindergarten belief that the Governorship of Delta State or indeed any other position that will demand competition, is in the custody of the incumbent Governor who can promise anybody and will hand it over to that person. In fact, any politician who believes in such a promise, is not only naive but some of them are even foolish and stupid enough to go about embarrassing themselves with such expectations and then crying betrayal when they fail.

4. For the records, the Governorship of Delta State is not anybody’s personal property to ‘dash’ or to promise another person that they will hand it over to them on a platter of gold, without any opposition or competition. Every serious politician (and indeed all those who have been given the Grace to become Governors; Ibori, Uduaghan, and Okowa), know that he or she must work very, very hard either to get that coveted seat or to ensure that whoever they are supporting gets the seat. That’s the nature of politics.

5. Talking about ‘Betrayal’ those who have followed Delta politics know how many aspirants were seemingly ‘betrayed’ for Dr. Emmanuel Uduaghan to emerge as Governor in 2007. We even know who was betrayed in 2014 for David Edevbie to become an aspirant. It is a clear reflection of an ignorant, immature mindset of any writer to even assume that because his own permutations did not work as he expected, those he tipped for a position were betrayed. That’s a very myopic way of assessing any situation, especially in politics, which is subject to all manner of considerations.

And when some of these ignorant people talk the rubbish that Okowa betrayed Wike, who was ‘sending private jet to pick him for meetings’, they have first of all exposed their lack of understanding of the regional politics that played out in the run-up to the PDP Presidential Primaries and secondly, they have forgotten, or do not even know, that Wike went to Sokoto and gave Tambuwal a whopping =N=500million when their international market got burnt.

It was this same Tambuwal, who has commissioned more of Wike’s projects in Rivers State than any other top politician, who is always a most revered and welcomed presence at Wike’s country home in Rumueprikom and who is even more of a friend and brother to Wike than Okowa; the same Tambuwal, that openly in front of the whole Nigeria, stepped down for Atiku, in the national interest and as a result of his patriotism for Nigeria’s development. How convenient?

And by the way, did they also notice that all the PDP Governors, including Okowa, Wike, and Tambuwal paid a solidarity visit to Alhaji Atiku Abubakar and were all smiling and speaking with one voice. Why then are these Okowa detractors drinking the Panadol meant for the so called ‘betrayed’ people, when the people themselves have settled. No be juju be that?

In fact and from records, quite a good number of South-South and South-East States did not also vote for Wike for reasons best known to them, especially when it became obvious, after the Asaba Accord, that the South-East which had national sympathy, was divided along party lines and could not even produce a consensus candidate and the South-South had Wike and Udom Emmanuel on the ballot. So was it Okowa that ‘betrayed’ Wike? Some people are just dumb and blinded by their own bitterness and hatred, to tell the truth.

6. We had, after much persuasion and of course in consideration of the length of this response, resisted the temptation to take on the listed individuals that were supposedly ‘betrayed’ by Okowa one by one and dismiss the useless allegations and incidents that have been cleverly presented as betrayals, but suffice it to say that what easily comes to mind after reading the list is the biblical admonition: “He who is without sin, let him cast the first stone”.

I challenge any of those on the list to come out and tell the world, including the writer of the article, that they have never failed to fulfill a promise they made to someone, as a result of circumstances beyond their control. Infact, how is it even possible for someone to promise what he doesn’t even have ownership of to someone and then that person, especially if he is a serious politician, be so naive as to believe such a promise, if it was even made in the first place?

To set the records straight, Governor Ifeanyi Okowa sounded two points loud and clear from the onset: First was that he has not anointed anybody and was not supporting anybody, which also meant that he was not under any oath or obligation to support whoever anyone else was supporting. He also appealed to Deltans to pray for him and with him so that God will reveal the person He, the Almighty, has chosen.

Secondly, he also made it clear in the various stakeholders’ meetings that were convened that in the event that the key leaders and stakeholders failed to agree on a consensus candidate, then all qualified aspirants would go into a free and fair primary election to elect a candidate, which, in the first place, has always been the way of the PDP anyways.

But then, it soon appeared that some people were trying to force a particular aspirant down the throat of Okowa and Deltans and to blackmail the Governor with this warped, pathetic, and shameless allegation of not being ‘faithful’ to compel him to accept their choice, just as they did with their relatives, but Okowa simply stood his ground and made it quite clear that power now belongs to the people, just like the PDP slogan says.

It is on record that one of the first reforms Governor Okowa made when he became Governor and Leader of the PDP in Delta State was to return power back to the people and he had pursued this philosophy and demanded and implemented it with unwavering, crusading zeal, to the point that this has become the outstanding hallmark of the party, because he had always allowed the people to choose who would represent them, even down to his own constituency.

Governor Okowa made it clear that Delta State had become too big and Deltans have become far more sensitive and enlightened for anyone to try that kind of gimmick of forcing a candidate on them again, just because it worked almost ten years ago. We are now in an era where Godfathers must deploy subtle and direct persuasion, tireless negotiation, and a tremendous amount of their goodwill, instead of using force and intimidation, to get the people to follow their way in the politics of today.

In the end, Deltans in the PDP voted their favoured candidate for Governor, and from the margin of victory, it became quite clear that the eternal injunction: “Vox Populi, Vox Dei”; the voice of the people is the voice of God, was manifested and it all ended in praise for those who believed in the Lord and trusted the process, while others have since pitched tent with alternative platforms and have also been seemingly blessed in the same manner, although we all know that God is not mocked in the accomplishment of carnal victories. His own blessings endureth.

In the final analysis, let us state categorically that Governor Ifeanyi Okowa has been favourably mentioned and seriously considered for the position of Vice Presidential Running Mate to Alhaji Atiku Abubakar and nothing can change or erase the strong points and goodwill which motivated and inspired his nomination and has made him a front runner in the quest.

Let us conclude by stating the obvious fact that one of the enduring principles of politics is the process of continuous negotiations, horse-trading, alliances, and definitive alignments in which sacrifices would be made and alignments signed and sealed. Nothing is ever cast in stone until all the options have been explored both in the national interest and most importantly in the fulfillment of the main objective of the party, which ultimately is to win the election.

OKOWA IS NOT A TRAITOR AND DID NOT BETRAY ANYBODY: THE TRAITORS AND BETRAYERS KNOW THEMSELVES