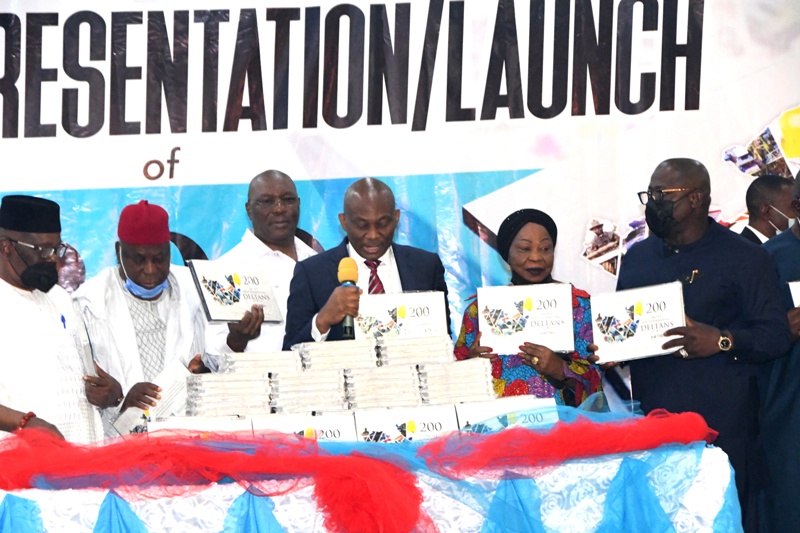 He spoke at public presentation/launch of a book titled “200 Most Outstanding Deltans” held at the Unity Hall, Government House, Asaba.

According to him, financial engineering is needed to generate resources that would oxygenate the economy of the nation as well as the foreign reserves needed for the country to interface with the global economic system.

He said the present situation in the country, if left unresolved, could lead to inability of government to pay salaries with the attendant consequences of social upheavals unless the government would continue to take loans.

“You will agree with me that resolving this kind of economic challenge will require great financial engineering.

“This kind of engineering is also needed to generate resources we need to run our country and the foreign reserves needed for us to interface with the global economic system.

“This situation, if left unresolved, could lead to inability of government to pay salaries with the attendant consequences of social upheavals unless we are going to continue to take loans,” the retired General said.

Speaking on the book (200 Most Outstanding Deltans) jointly authored by Pastors Powell Tos, Kennedy Bienose and Mr Nelson Egware, Ogomudia said the publication was a power house of individuals whose personal achievements are truly outstanding.

According to Ogomudia who was the Chairman at the ceremony, the public presentation/launch of the book, by implication, speaks to the subject of development be it in Delta State, some other states or in Nigeria generally as a country.

“To some people, the event of today is an ordinary one but to me, it is unique and special since it mirrors a perspective to development which recognises achievements, hard work and the idealism of performance per excellence.

“From the names of those who made the list in this first edition, it is clear that putting the list together, like the Secretary said, is a herculean task.

“I am aware that Delta State parades some of the best talents in this country. Therefore, the list would have been a lot longer than what we have now but I believe that subsequent editions, like the Secretary said, would definitely address all that have been omitted,” he said.

While congratulating the outstanding personalities, Ogomudia noted that their recognition through the publication, was a further manifestation of a little muster seed which, he said, was planted by Governor Ibori at the onset of democratic governance in 1999, adding that Ibori set the stage for the recognition of Deltans who were able to make it to the top of their careers.

“Today’s event, therefore, marks another dimension in performance and recognition of individual achievements since it has some historical perspectives through the launching of this book.

“The 200 outstanding Deltans who made the list, have made history today. Indeed, their achievements and joint contributions made today’s event possible. If they didn’t achieve, l am sure nobody will waste his time trying to put together a list,” he stated.

“Occasions like this, according to him, work for our youth because they are our hope for the future, adding that they must recognise that the profound challenges of the future which stretched before them are enormous.

“To this extent, you must note that every generation has its own challenges and yours, l doubt if it could be an exception.

“If you are prepare to play any role of your own which off course, you must do, you must recognise that the future is already here with most economies now being technologically driven.

“In addition, competition for the best jobs and industries will come from the cutting edge technologies which you must endeavour to play a role.

“The challenges will also include mind bogging inventions that are coming up daily which are also knowledge driven for which you must prepare yourself adequately,” Ogomudia said, pointing out that the event should serve as a catalyst that will spur the youth into working hard in order to meet the challenges ahead.

In his remarks at the ceremony, Governor Ifeanyi Okowa thanked the authors of the book for their painstaking effort in putting the book together.

The Governor who was represented by his deputy, Deacon Kingsley Otuaro said in a population of about 6 million people that are outstanding in their different respect, picking 200 most outstanding “is undoubtedly, a very painstaking work.”

“l want to use this opportunity to say that whoever that is there, is there in a representative capacity of the fact that we are all true Deltans and we are all winners,” he added.

Earlier in his welcome speech, the Secretary of the organising committee, Pastor Kennedy Bienose disclosed that the book is a document for posterity, adding that there would subsequent editions, even as he said that the e-version of the book would be available soon.

The book reviewer, Godfrey Ubaka who is the Editor-In-Chief of The Pointer Newspaper said the book which was lucidly presented was aimed at celebrating excellence.

The highlight of the ceremony was the unveiling of the book by the Minority Leader of the House of Representatives, Hon. Ndudi Elumelu and Speaker of the State House of Assembly, Chief Sheriff Oborevwori, among other dignitaries.