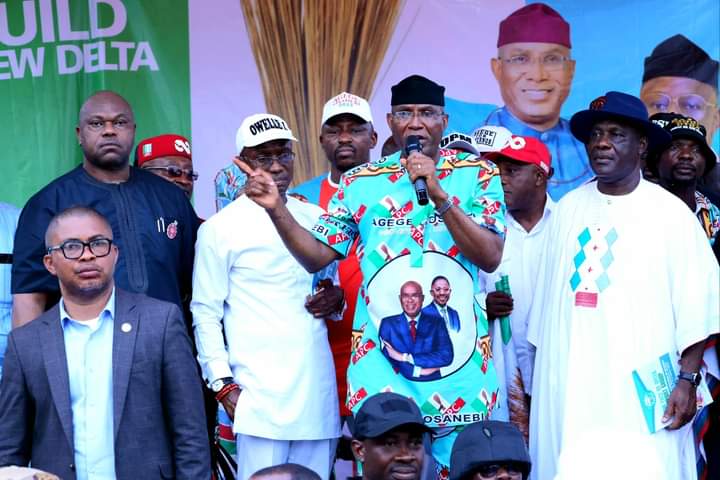 People of Anioma nation in Onicha-Ugbo, Issele-Uku and Onicha-Olona in Aniocha North LGA of Delta State have rejected the PDP and the much hyped prosperity for all mantra of Governor Ifeanyi Okowa, saying it has had no positive impact on the lives of their people except in Owa Alero, Okowa’s hometown.

In a statement, the Director of Communications and Media Strategy, Delta APC Campaign Council, Olorogun Ima Niboro said the people made a bold statement, Tuesday, November 29, when the ward to ward campaigns of the APC for the 2023 elections flagged off at Onicha-Ugbo, Aniocha North LGA of Delta State.

The APC Governorship candidate, Senator Ovie Omo-Agege, told the people that by newer estimates, over N3.5trillion had come to Delta State in the past seven and a half years of Okowa’s administration.

This, he said, included the recent N250 billion 13 percent derivation backlog released by President Muhammadu Buhari, as well as internally generated revenue. Yet, he said , the governor had gone ahead to borrow over N400 billion.

“All of us right now, even our innocent children and those yet to be born are all debtors, we are liable to the debts incurred by Governor Okowa.

“As if the burden of debts we are going to pay is not enough, Governor Okowa has decided to impose a stooge who he would be able to manipulate, to continue the theft and squander of the state resources.

“We are resolute and have agreed across the three senatorial districts that we will not allow Okowa a third term through his stooge, Sheriff Oborevwori,” Omo-Agege said.

The APC Candidate also used the opportunity to clarify earlier remarks where he was quoted as saying he would continue projects of the Okowa administration. “ Because they have nothing to show, Okowa and his people have been going round saying that’s an admission that they have some projects. But what I said was, ‘if any,’ and I dare say there are none worth talking about “

He unveiled specifics of the EDGE to BAND Agenda promising to let the people of Anioma nation enjoy life again with him as governor of Delta State.

He described Senator Omo-Agege as reliable, trustworthy and committed to the development of the people.

He said Omo-Agege as Governor would grant the demands of the people and therefore urged them to vote him as next governor of Delta State.

Speaking on behalf of HRM, Agbogidi Obi Victor Chukwumaleze 1 JP, the Obi of Onicha Ugbo, Chief Stephen Ugezene, the Onishe of Onicha-Ugbo assured Omo-Agege of his people’s support for his election as governor.

“We have spoken, God be with you, no harm shall befall you. Go and succeed,” he said.

At Issele-Uku, Senator Omo-Agege also led the campaign train to the palace of His Royal Majesty, Agbogidi Obi Nduka, where the Issele-Uku Development Union Chairman, Prince Offor Dilie, by the permission of the monarch, presented the challenges of the community to include potable water, flood and erosion control, good road network and reactivation of the facilities of the business park/skills acquisition center located in Issele-Uku which was abandoned by the Okowa administration.

In his brief remarks, Obi Nduka told Omo-Agege that he has followed his EDGE agenda with keen interest, and prayed for his success at the polls in 2023.

At Onicha-Olona, Senator Omo-Agege said that while Okowa promised prosperity for all Deltans in 2015, he has brought prosperity to only his native Owa- Alero community.

As in other locations, Senator Omo-Agege asked supporters to vote for all APC candidates across the board, declaring that this is the only way to ensure seamless cooperation between various levels and arms of government in 2023 and beyond.

Earlier, the campaign train landed at the palace of the Obi of Onicha-Olona , HRM, Christopher Uzu Diji, who showered praise on Senator Omo-Agege for building a befitting palace for him, which Omo-Agege said he would commission on his next visit when he becomes governor of Delta State.

“May God bless you, you have already won the election,” the monarch said.

Inside Story Of 7-Month-Old Baby Fathered by Terrorist, Nurtured by Military