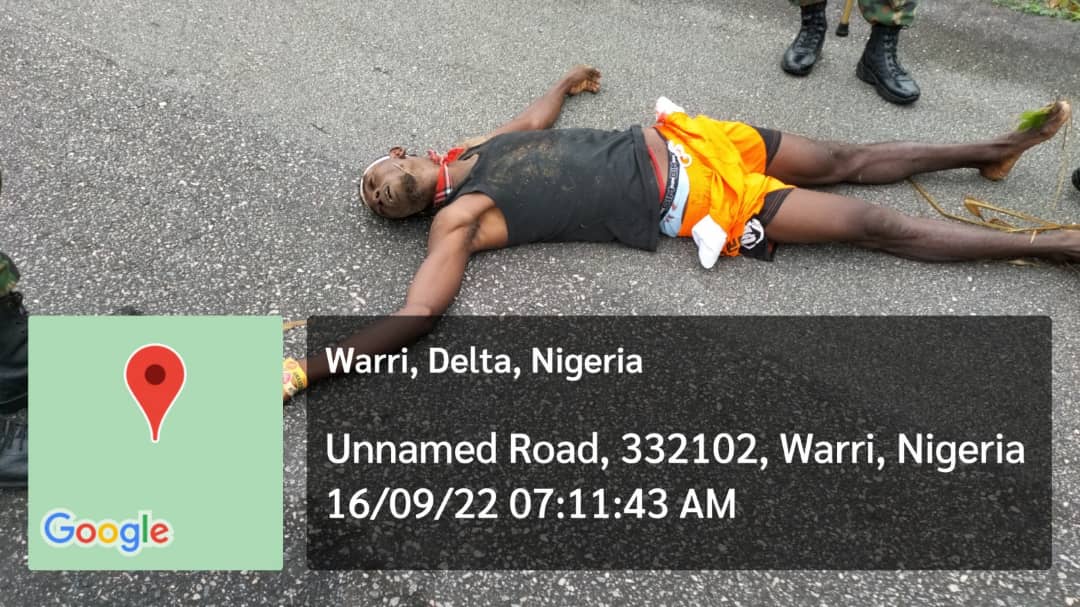 The body of a middle-aged man killed in the protracted border delineation conflict between the Aladja and Ogbe-Ijoh communities in the Udu and Warri South-West local governments of Delta State has been found by soldiers from the Nigerian Army’s 3 Battalion, Effurun, Delta State.

The body was found amidst growing tension in the area by soldiers of the 63 Brigade Operation Delta Hawk Patrol in Warri who were deployed around 5.30 am on Friday, September 16, 2022, to the warring communities.

A man who was later identified as the deceased’s brother was also arrested at the scene, according to www.bigpenngr.com.

The deployment came after the resumption of gunfire between the rival factions in the local areas on Friday.

The troops were sent out in response to a distress call regarding gunfire that had been intermittently heard in the area between the communities of Aladja and Ogbe-Ijoh in the Udu and Warri South West Local Government Areas of Delta State, according to a statement from the army barrack.

The 3 Battalion’s Operation Delta Hawk Patrol forces quickly mobilized to the location, where they discovered that the shooting had stopped when they arrived.

But close to the scene of the incident, the lifeless body of a middle-aged guy was found.

A fabrique nationale (fn) rifle with a magazine loaded with nine rounds of 7.62mm (nato) ammo, an empty ammunition case, and an Infinix phone handset are among the items discovered on the deceased individual.

Locals who were called recognized the dead as Mr. Frank Amakiri, an indigene of Ogbe-ijoh community, but they were unable to provide further details about what happened.

Additionally, a suspect named Mr. Michael Amakiri, whose residents claimed to be the deceased’s biological brother, was arrested at the scene.

A technomobile phone handset was also recovered from the arrested suspect for exploitation.

Meanwhile, the chairmen of the Udu and Ogbe-Ijoh Local Government Councils were contacted by the troops for consultation to douse the situation.

While the recovered weapons, ammunition, and other items discovered at the crime scene are kept in custody to aid investigations, the deceased’s remains were given to the chairman of the Warri South West LGA for proper handling in coordination with the civil police.

In order to contain the situation, Operation Delta Hawk troops have remained stationed in the area to conduct stop and search operations as well as show of force patrols alongside other security and law enforcement agencies.

The area remains relatively tense due to the ongoing boundary demarcation exercise by the Delta State Government and a sense of mistrust that still exists between the feuding communities, the statement added.