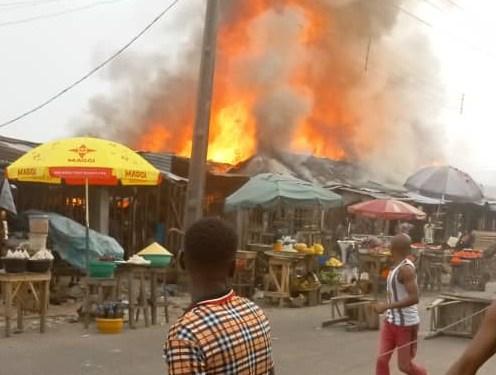 A Sunday afternoon fire have destroyed goods and properties worth millions of naira at the popular Ogbe-Ijoh market in Warri South Local Government Area of Delta State.

Although details of how the fire started were still sketchy as of press time, traders resorted to self-help trying to salvage their goods and properties from the market located opposite Eco Bank and near main market in Warri.

BIGPENNGR reports that the Ogbe-Ijoh market have been infamous for cases of fire incidents. The market is adjudged as one of the largest fish markets in the Southern part of Nigeria.

A witness who gave her name as Tamara, said that they suddenly saw fire balls emanating from the market square in the afternoon prompting residents to rushed to the scene.

“We don’t know exactly how the fire started but we expect the fire was set up by someone who was trying to burn something but it escalated to the market, she said.

The scene was besieged by residents and traders who were seen helping the state fire service men who were on the scene battling the raging inferno.

Some residents who spoke, said the fire was sparked by a visibly insane woman who was spotted cooking at a refuse dump in the market.

One of the trader who gave her name as Mrs. Philomena Ona told newsmen that the fire started around 2:pm and spread to the foodstuff section of the market, destroying perishable and non perishable items in the market stalls.

“A mad woman was gathering things in the debris, at a time we saw her set up fire to cook but the fire later spread probably because of the dry weather”, she said.

As at time of filling this report around 5;pm, the fire service men had ran out of water to battle the inferno which was still ranging widely. There was no casualty from the fire incident but traders were seen counting their loses.