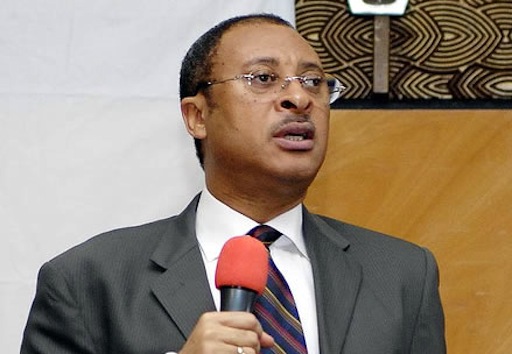 The All Progressive Congress (APC), Delta State chapter has responded to request made by Prof. Pat Utomi, governorship aspirant, saying only National Executive Committee (NEC) of the party, determine delegates list and guidelines.

This was contained in a letter in response to request made by Utomi on Saturday.

“The inquiry of my campaign in the last few days on the afore-mentioned issue from our Delta State APC Secretariat has not yielded any result”, he said.

He went further to say, “It therefore seems to me that there is a deliberate effort to make the governorship primary election to either fail or to achieve some pre-determined outcomes in favour of particular aspirants” he added. 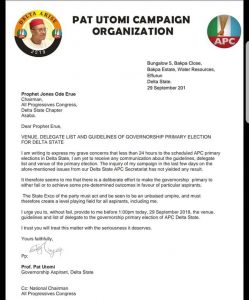 But in a response, Prophet Jones Ode Erue, the chairman of Delta APC, through the Legal Adviser of the party, E. V Onojeghuo said; “as a result of the shift in our Party’s governorship primary from 29th September, 2018 to 30th September, 2018,the venue earlier slated for our own primary became untenable due to the clash with PDP governorship primary fixed for the same date hence the need for new venue for the exercise which is the College Of Education (Technical) Along Ibusa Road, ASABA”

“Finally, the allegations that the State Executive Committee is acting a deliberate script with a pre determined outcome is completely untrue and most unfortunate. The State Executive Committee has time without number expressed it’s readiness to provide a level playing field for all aspirants and this we are determined to achieve”, the letter read. 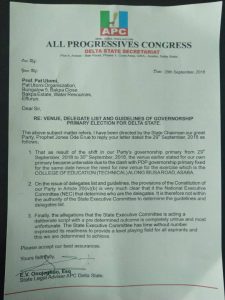