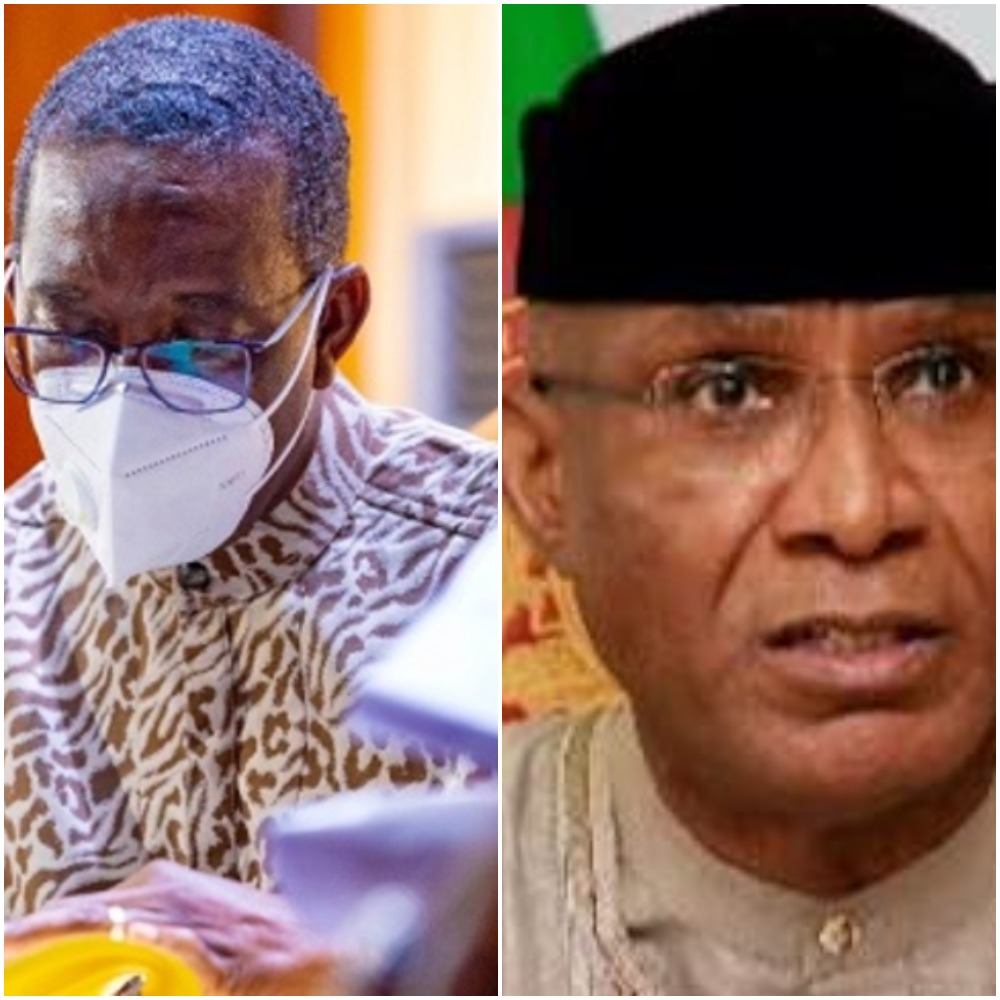 The borrowing binge of the All Progressive Congress, APC-led government of President Buhari which has put Nigeria’s debt profile at $32.85 billion by March this year seems to be a trending topic after the Deputy Senate President, Ovie Omo-Agege queried the N150billion bridging finance facility approved in favour of Delta state Government by the state House of Assembly.

BIGPENNGR.COM reports that Omo-Agege’s seething tirade against Delta state Governor, Senator Dr Ifeanyi Okowa  over the now controversial N150 billion ‘loan’, appears to be getting equal attention from stakeholders in the state who lampooned OmoAgege’s National Assembly like the state House of Assembly for ‘rubber stamping’ anything forwarded to them.

Governor Okowa had in the letter addressed to the Speaker, Rt. Hon. Sheriff Oborevwori, which was read at plenary in Asaba, claimed that part of the loan would be tailored toward taking care of outstanding pension commitments to the state and local government areas  pensions in the contributory pension scheme, amounting to N20 billion and N10 billion respectively.

He had said: the requested credit facility which has Zenith Bank PLC as the “lead arranger”, would be principally tailored toward defraying arrears of unpaid certificates earned by contractors with respect to completion of some critical ongoing legacy projects awarded by past and present administrations in the state.

But Omo-Agege, in a statement entitled “THE N150 BILLION SO-CALLED LOAN LOOKS TOO CORRUPT TO BE IGNORED”, and signed by his Executive Assistant, Aruviere Martin Egharhevwa, Esq, said that there was no ‘compelling justification to hastily borrow a whooping N150 Billion under the pretext of paying for contracts’.

Senator Omo-Agege said that he is concerned that ‘this huge loan, so-called, is not tied to any specific major strategic developmental project thoughtfully conceived and executed in the best interest of Deltans.

According to him; “Responsible public finance management demands clarity on the funding of budgets. This is a key consideration in awarding contracts for infrastructure and general developmental projects. Given Delta’s distinct comparative financial advantage compared to many states of the Federation on account of its huge monthly oil derivation funds, Deltans deserve to know the compelling justification to hastily borrow a whooping N150 Billion under the pretext of paying for contracts that the Okowa administration regularly claims it duly awarded, with funding guarantees. Strikingly, the so-called projects are all unknown to the public.

“Further, why is the Okowa regime borrowing hastily against anticipated “Petroleum Subsidy Payment”/“refund” with indeterminate crystalisation time? Are they not wetting the ground for the next administration to contend with huge debts unnecessarily? Knowing that the repayment funds may not even crystalise till maybe 2027/2028, why is the regime doing this? As suggested by some commentators, is the N150 Billion a 2023 ‘election war chest’? If true, we can only advise a rethink because it will fail with serious consequences.

“As reported, after about 7 years of neglecting the all-important duty of diligently settling pension commitments to our senior citizens, the Okowa regime now suddenly wishes to pay them from this so-called loan. Because these citizens are entitled to their pensions, they deserve to and must be paid their pensions, anyhow. However, the regime’s choice to pay them from an unusual source and close to the 2023 general elections is not lost on discerning minds, including our seniors. Whatever the intentions are, they will be clinically shut down at the right time.

“While we recognise that borrowing is sometimes necessary in public finance management, especially in relation to mega infrastructure development, we also believe such borrowing must be responsible, and not recklessly propelled by corruption and primitive private interests. It should not be all about sinking many generations into intractable debts in the hope of achieving impossible electoral postulations.

“Without question, the N150 Billion loan approved by the House of Assembly is an escalation of a very corrupt pattern of reckless borrowing by the Okowa administration to fund mystery projects or what Deltans now generally refer to as ‘audio’ or invisible projects. We strongly advise and warn them to think twice about this so-called loan. It looks too corrupt in appearance and character to be ignored. It will create too many problems for them,” the statement reads.

Responding to the claims at a press conference on Wednesday in Asaba, the State Commissioner for Finance, Chief Fidelis Tilije, flanked by his Information counterpart, Mr. Charles Aniagwu, stated that the State Government was seeking N150billion bridging finance facility to pay for the completion of some critical on-going legacy projects awarded by past and present administrations.

The government further explained that the facility would also take care of outstanding pension commitments to state and local government pensioners in the state.

Tilije said the request was not particularly a loan but a discounting receivables from the Federal Government for Petroleum Subsidy payments made without recourse to the 13% derivation due to oil producing states from 2010 to date.

According to him, the funds totaling N270.6billion ought to have been received a long time ago but because the Federal Government could not pay the whole money in bulk, it became reasonable and logical that the oil producing states enter into an agreement for some part of it to be paid within 3 years and the other part within 5years.

“Having reduced the debt profile of the state from N151billion to N72billion, it is important that we have so many other contracts that we have awarded within the period of time and because it is a close out of a particular tenure it became very important that we ensure those legacy projects including the new State Secretariat building are completely paid for before we leave office,” Tilije stated.

He explained that the intention of Governor Ifeanyi Okowa was to ensure that on transition day, the debt profile of the state would be almost insignificant.

“So we thought it wise that rather than allow inflationary variables to dry down the proceeds of this recovery, it was important for us to discount some of them.

“Apart from the fact that we are paying old contractors, we are also ensuring that even the new contracts that was awarded which we refer to as legacy projects are also completed on time.

“The governor is also very mindful of the fact that pensioners are suffering. As at when we came into office in 2015, the total pension past dues was N35billion and we have been trying to reduce that outstanding dues.

“The state government approved that N300m monthly should be paid as past pension outstanding and just recently it was increased to N500million monthly.

“To further reduce this past pension obligations, from the facility, we will be spending N20 billion for state pensions outstanding of past dues and N10billion to the Bureau of Local Governments as grant to enable them also reduce whatever outstanding payments to local government pensioners.

He said there were some legacy projects that could no longer wait because of rising costs.

He listed some of the projects to include, Orere bridge, Ode-Itsekiri Bridges and roads, Koka flyover and interchange, Bridge across River Ethiope at Obiaruku, the Ughelli-Asaba Road, Flood control in Effurun and Warri, Owa-Alero drainage channels and projects being executed in the three new universities.

Also speaking, Commissioner for Information, Mr Charles Aniagwu said contrary to speculations in the social media, the bridging finance is not for any political reason but simply to address special needs in the state.

He said the funds will be paid to the state in tranches on quarterly basis.

“Knowing that money do not maintain stable value due to inflationary variables, we decided that the money works for the state today rather than losing its value tomorrow.

“Since there are lot of developmental needs that we need to address as a state, which will not only reflate our economy but will also make it possible to realise our intentions of bringing about renewal in our different communities and ensuring that our brothers and sisters who have retired over time both at the state and local government level are paid.

“We are giving you these details because it is in line with our transparency posture since 2015 and to make it clear that the season we are in has nothing to do with the decision we have taken before individuals will begin to think that we are looking for money for politics,” Aniagwu stated.