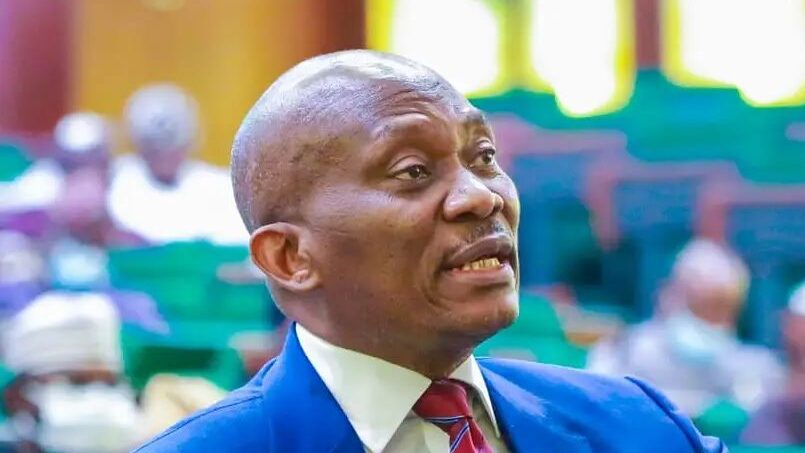 Eloke Aziekwu, Director Oshimili South Campaign, Elumelu Campaign Council, has dismissed media reports purporting that Rt. Hon. Ndudi Elumelu, the Minority Leader of the House of Representatives was chased out of Oko, one of the satellite communities in Oshimili South Local Government Area.

Aziekwu said that the refutal followed misleading report published online on Wednesday, December 7, 2022, in which the PDP Campaign train led by the Delta North PDP Senatorial Chairman, Elder Moses Iduh, was equally reported to have been prevented from entering the Community.

The statement reads; “This report is totally false and an unpardonable violation of journalism ethos of truth and factuality as it does not in any way reflect the facts of the very successful Ward to Ward Campaign but apparently scripted and smuggled into the media with a view to embarrass the Minority Leader as well as the Governor of Delta State, Sen. Dr. Ifeanyi Okowa ahead of the 2023 general elections.

“This is because at no time was the well-received PDP Ward to Ward Campaign in Delta North Senatorial District disrupted or challenged, let alone prevented in Oko by angry youth as claimed in the said publication.

“Also, at no time did any persons, group of persons or youths challenged or stopped the Minority Leader, Rt. Hon Ndudi Elumelu from entering Oko Community or any other community for that matter as purported in the misleading report.

“Contrary to the said report, PDP Ward to Ward Campaign train which had the Minority Leader and other leaders like Senator Ned Nwoko, Bridget Anyafulu and all the PDP candidates in the forthcoming 2023 elections, was excitedly received by the people of the Oko Community, especially the youths, who came out enmasse particularly to cheer and celebrate Hon. Elumelu for his numerous development projects and citizen empowerment in the area.

“To set the records straight, rather than chase Hon. Elumelu away as was mischievously  reported by the Punch Newspaper, the youths of Oko community, through their leader, properly identified as Mr. Chukwudi Okolie, warmly welcome and appreciated the Minority Leader for attracting projects to their Communities and declared their resolve to re-elect him to the National Assembly.

“The community recalled the numerous empowerment schemes and infrastructural projects by Hon. Elumelu, including the 26-point Oko landing bay, initiated and completed by him as part of his constituency project, with 8 brand new 22-seater speed boats to shuttle between Oko and Asaba, which will be commissioned in January 2023.

“The Youth Leader however used the opportunity to call for intervention about the state of a particular road and the issue faulty transformer and urged the campaign train to take their message to the state government.

Responding, the Delta North PDP Chairman, Elder Moses Iduh explained to the youths that the first contractor who was engaged by the Governor Ifeanyi Okowa led, Delta State Government to handle the road project, which was top on the list of infrastructural priorities, disappointed them, causing the State Government to re-award the contract to another contractor, SETRACO and that work had begun on the road.

On his part, Hon. Elumelu, thanked the people for their support pledged that he in collaboration with Sen. Ned Nwoko and Bridget Anyafulu, will ensure that the contractor on the road delivered and that the faulty transformer will be immediately repaired.

“This is more so as our Campaign Organization has already established that the reporter, Matthew Ochei, the Asaba Punch Correspondent was not at the venue of the event but apparently fed his platform with script by mischief makers and political opportunists, who are being intimidated with the towering achievements and popularity of Hon. Ndudi Elumelu.

“The Ndudi Elumelu Campaign Organization therefore demands an unreserved apology and retraction on the publication, as a redress for the damages suffered as a result of the false report.

“Our Campaign Organization also urges the media practitioners to immune themselves from politics as well as always crosscheck the facts before going to press to avoid misleading the public.

“We call on the general public, the good people of Delta State and particularly the people of Aniocha/Oshimili Federal Constituency to disregard the report as well as to be at alert on such designed to destabilize the state ahead of the 2023 general elections”.