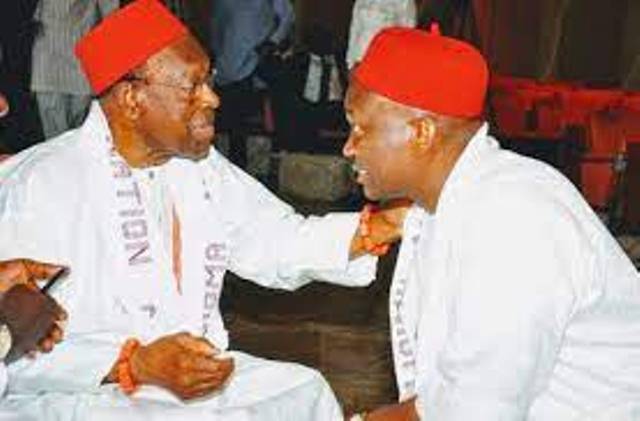 The Minority Leader of the House of Representatives, Rt. Hon. Ndudi Elumelu has felicitated the Asagba of Asaba, (Prof) Chike Edozien on his 98th birthday.

In a statement on Thursday, the minority leader eulogized the traditional ruler and described him as a renowned icon and outstanding monarch who has contributed immensely to the medical profession, the traditional institution, the development of Asaba and humanity in general.

He appreciated God for preserving the life of the traditional ruler, saying that the Lord God Almighty in His love and mercy has continued to make the Asagba’s reign eventful and glorious.

“On behalf of the Elumelu family, the good people of Aniocha/Oshimili Federal Constituency and of course the Minority Caucus in the House of Representatives, I, with the utmost reverence and joy celebrate you, Your Royal Majesty, our father, the Asagba of Asaba, (Prof) Joseph  Chike Edozien, on your 98th birthday and 31st anniversary on the throne.

“I give thanks to God Almighty always for keeping you in very sound health with great wisdom, grace and strength as the fountain and wellspring of blessings to the people of Asaba kingdom, our State Delta and our nation, Nigeria in general.

“Since your ascendancy to the throne, you have continued to radiate a transcendental glory, love, uprightness, justice, fairness as well as inexorable source of inspiration in all virtues; honesty, diligence, industry, accommodation and peaceful coexistence for which our people are known.

“At 98, you remain a living legend, an outstanding national Icon, a renowned statesman and patriot who has contributed immensely to the development of the medical profession, the traditional institution as well as the unity, stability and development of Delta State and Nigeria at large.

“To the younger generation of leaders, you remain a beacon of light and shining demonstration that the essence of leadership lies only in seeking the good, happiness and sustenance of others at all times.

“Your Royal Majesty, on this great day, as our people roll out the big drums in celebration, I pray to God to preserve you in good health, peace, unlimited joy and grant you many more decades on the throne to the Glory of His Name and the benefit of humanity,” Elumelu stated.

Muslim VP: I Hold No Malice Against Any Religion, Says Ex-military Gov, AVM Ajobene On Resignation From APC