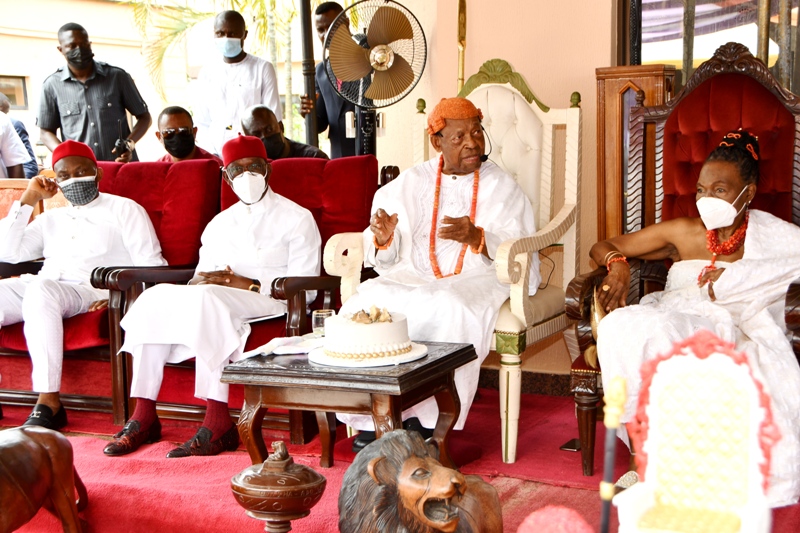 Delta State Governor, Senator (Dr) Ifeanyi Okowa, on Saturday, announced that the multi-billion naira new civil service secretariat being built by his administration in Asaba would be named after the Asagba of Asaba, Obi (Prof.) Chike Edozien

Okowa announced this at the 30th coronation and 97th birth anniversary celebration of the Asaba monarch held at his palace in Asaba.

According to him, the gesture is in recognition of the Asagba’s remarkable contributions to the promotion of peace.

He said that the monarch also did a great deal in championing the course of equity, which led to the emergence of an Anioma son as govermor of the State.

The governor said that the state secretariat sitting on a 54,000 square metres of land would be ready for inauguration in September, this year.

He noted that the reign of the Asagba had brought tremendous peace and sustainable development to Asaba and assured him that his administration would remain focused in the infrastructural transformation of the capital territory as well as other parts of the state.

Okowa said that the drainage project in Asaba was on course, adding that the new Dennis Osadebe University, Asaba, would be transformed to meet international standard.

He advocated the introduction of structural roles for traditional rulers, federal and states’ laws in the area of peace-building and development.

“I want to rejoice with our royal majesty and his family and the entire people of Asaba as our father, Obi Prof. Chike Edozie turns 30 years on the throne and as he celebrates his 97th birthday.

“We are proud of your reign as the Asagba of Asaba. I recall 1999 when we came into Asaba, looking back at that time and looking at what Asaba is today, we can all acknowledge that the reign of his Royal Majesty, the Asagba of Asaba, has brought a lot of development to this community.

“We are proud of the fact that our people have been very peaceful in this state and today, you would realise that persons from all parts of Delta State are quickly settling in Asaba and even our brothers and sisters from across the Niger and other parts of the South East and even many other places are beginning to settle in Asaba.

“It is because of the peace that we have provided for the people. I must use this opportunity to thank the entire poeple of Asaba for giving the people and the government of Delta State, a very peaceful environment to truly operate,” he said.

The governor said that he had listened to the lecture delivered by Prof. Epiphany Azinge, a chief in the Asagba’s palace, saying “I think he made a lot of sense and l think that the narratives out there is the need to create a structural role in governance for traditional rulers.

“I believe that there are certain roles that the traditional rulers play that you cannot take away from them. They play a very important role in community mobilisation which is good for governance and good for development.

“They also play a very important role in peace building which is good for our nation, moreso at this time that we find ourselves as a nation.

“If we are talking about security of our communities, the royal fathers are obviously best organised to truly organise our structures in our various communities to provide the security architecture that works for our people.

“I believe that looking at all these, it is possible to truly structure a role that could enable the traditional rulers play a more effective and more inclusive role in governance that would be of major interest to our people.”

Okowa added that the establishment of National Council for Traditional Rulers would help protect them from interference of politicians and others who might want to kick them out of office against the wish of majority of their people.

While stressing the need for traditional rulers to be insulated from partisan politics, the governor congratulated the Asagba on his coronation and birth anniversary celebrations, and urged him to use the remaining days of his life for the service of God and humanity.

In a lecture titled “Imperative for Constitutional Roles for Traditional Rulers,” Prof. Azinge noted that the traditional institution exerted considerable influence and authority from pre-colonial to post-independence era of the country.

He observed that the 1999 Constitution of the country abrogated all the functions of traditional rulers in Nigeria.

He, therefore, advocated that the traditional institution should be accommodated as the fourth tier of government to enable it contribute meaningfully to national development, pointing out that traditional rulers should be insulated from politics.

In his remarks shortly after cutting his 30th coronation and 97th birth anniversary cake, Obi Chike Edozie expressed appreciation to Governor Okowa for the monumental infrastructural growth and development of the state and for being part of his anniversaries celebration.

He also thanked other top government functionaries, captains of industry and traditional rulers who were at his palace to felicitate with him and called for constitutional roles for the traditional institution in the country.

Earlier, the governor was at Agbor for a funeral service in honour of Late Chief Solomon Chukwuma, a father-in-law of the Deputy Governor of Central Bank of Nigeria (CBN), Dr. Kingsley Obiora.

In a sermon at the service held at Saint John the Baptist Catholic Church, Agbor, the Catholic Bishop of Issele-Uku Diocese, the Most Revd. Michael Elue said the death of a Christian was a transition to eternal glory.

Bishop Elue said the burial of anyone was an opportunity for the living to take stock of their lives and plan towards reconciling with Jesus.

The funeral service was attended by dignitaries from all walks of life and featured special prayers for the bereaved family, the state and the nation.

I Walked Into EFCC Freely And Went Home Without Bail’ – Saraki