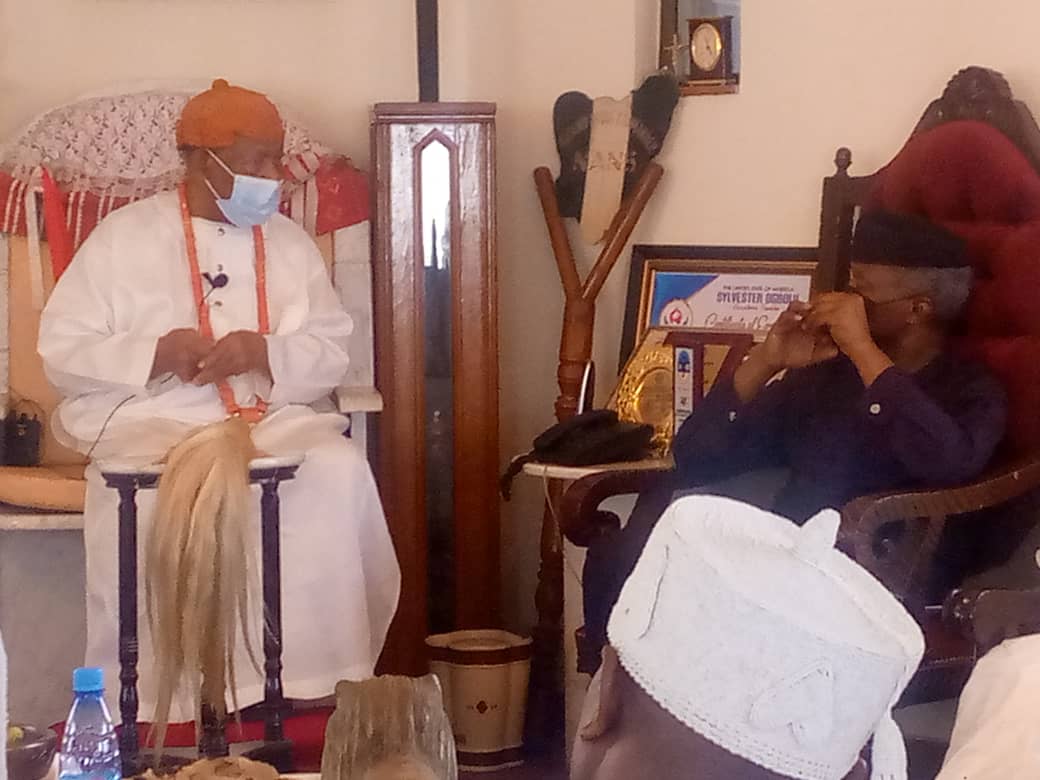 Prof. Yemi Osinbajo at the palace of Asagba of Asaba on Thursday during a courtesy visit on the monarch
26
SHARES
302
VIEWS
Share
TweetSubscribe

Over fifty years after the Nigerian civil war, the need to heal the wounds of the Asaba massacre came to the fore on Thursday as Vice President Prof. Yemi Osinbajo paid a courtesy visit to the Asagba of Asaba, HRM Obi (Prof) Chike Edozien.

Osinbajo who was in the state in continuation of his consultation for his presidential ambition met the paramount traditional ruler and his council of chief to seek his royal blessings.

The visit, however, sets the Delta State capital, Asaba agog as Osinbajo who landed at the Asaba International Airport at about 2:48pm, proceeded to Asagba’s palace with traditional troupes on ground to receive him.

Addressing the monarch, Osinbajo said that he has garnered enough experience as a Vice President in the past seven years and Acting President at various times, to be the President that the country has been yearning for.

While soliciting for the support and blessing of the Royal Father, he promised to bring on board the needed leadership and good governance that will transform and advance the nation from the current level to another level where security challenges will be a thing of the past, in addition to economic buoyancy translating into solid infrastructural and human capital development.

Asagba who responded by presenting the long awaited demands of the Asaba people, occasioned by the civil war genocide, admitted to the experience and brilliance of Osinbajo; however, advising that Asaba people will support a President that would heal the wounds of the people of Asaba.

The Asaba massacre is reported to have occurred in October 1967 in Asaba, the State capital during the Nigerian civil war.

The Asagba said that among the things the Asaba people are asking for is the establishment of a Federal University as one of the many demands for atonement of the heinous killings of Asaba people during the civil war.

Osinbajo had after the robust consultation with Asagba, moved to Vienna Hotel, venue of the consultative meeting with the APC delegates and stakeholders ahead of the party’s Primaries.

He briefed the press in the end, expressing excitement that there is hope of a new Nigeria with him at the helm of affairs.

Minister Announces May 2, 3 As Public Holidays