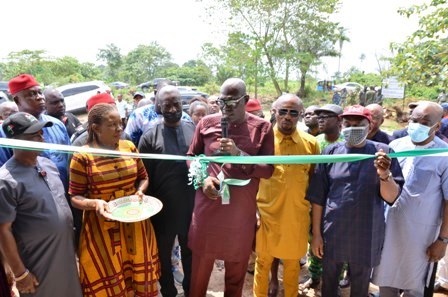 It was a harvest of people oriented projects on Thursday, 29th July, 2021 as the Delta State Governor, Senator Dr. Ifeanyi Okowa continued with the commissioning of Constituency Projects executed by the Minority Leader of the House of Representatives, Rt. Hon. Ndudi Elumelu for the people of Aniocha Oshimili/ Federal Constituency of the State.

The Governor, represented by the State Chairman of the Peoples Democratic Party, PDP, Delta State, Olorogun Barr. Kingsley Esiso was at Aniocha South Local Government Area where a total number of six projects were inaugurated for the use of the people in five communities.

Commissioning the projects on behalf of the Governor, Olorogun Kingsley Esiso marveled at the level, quality and nature of the projects provided for his people by Rt. Hon. Elumelu, describing them as ‘people oriented projects’ that have direct bearing to the lives of the people in the various communities.

He commended  the Elumelu for remembering the people and giving them quality and proactive representation at the national Assembly, describing him as the jewel and pride of the people in Abuja.

“I want to thank the Minority Leader who is our jewel and pride in Abuja for doing what it takes to be a leader.

“Yesterday we were in Oshimili South and today we are in Aniocha South commissioning projects. This is harvesting of Projects courtesy of our pride, Rt. Hon. Ndudi Elumelu.

“It is not easy, because we have been in this business and we know what our representatives can do and what they cannot do. Today, Elumelu is doing it differently, doing it in such a way and manner that is so exceptional and I want to believe that you are proud of him because we in our party are very proud of him.

“It is not easy for such a person in his position to be building and constructing projects. Our leader, we appreciate your efforts. You know that you are not only the leader of your colleagues, you are a leader in the Peoples Democratic Party. Your performance has attested to it, it has shown it and we respect you for it.

“I want to appeal to you that whatever you are doing to attract this caliber of people here; you must continue to do it.

“Projects are being scattered all over the place and the thing that amazed me is that all the projects we commissioned yesterday, today and will commission tomorrow, are projects of the year 2020. That is to say that the projects of 2021 are coming.

“I want to thank you on behalf of our people in Aniocha/Oshimili Federal Constituency and to encourage you and pray that you will continue to do more.”

He however called on the council Chairman and the various communities where the projects are located to manage them effectively while urging them to guide and protect them as their own properties.

Earlier,  Rt. Hon. Ndudi Elumelu who represents Aniocha/Oshimili in the House of Representatives, said that the projects were in consonance with his campaign promises to the people of his Constituency and in compliance with the Stronger Delta Mantra of the State Governor, Senator Dr. Ifeanyi Okowa, saying that the facilities are meant for the direct benefit of the people

“It is in compliance with his Excellency’s desire that infrastructure should be scattered all over the grassroots, not only in the State Capital. So the  ICT Centers, the Civic Centers and the Community town Halls are meant for the direct benefit of our people,” the Minority Leader stated.

He called on the Aniocha North Council Chairman, Hon Jude Chukwunwike to join forces with the traditional institution in the various communities to manage the facilities with a view to benefiting the people effectively.

In appreciating the Minority Leader, on behalf of the people of Aniocha South, the Executive Chairman, Hon.  Jude Chukwuwike, commended him for his service to humanity in the cause of his representation and his stewardship as the Minority Leader of the House of Representatives.

“You have through your diligence, dedication and fearlessness brought enviable results to Delta State generally and Aniocha/Oshimili in particular.

“Sir,  your outspokenness on national issues and resolute approach not to compromise the interests of your people have endeared you to many as a vibrant and articulate leader.

“The commissioning of these facilities will indeed be of great value not just to the people of Aniocha South, but citizens from other neighbouring local Government Areas.

“These are huge facilities for meetings, social events, recreation, training and empowerment of our youths. We sincerely commend your wonderful gesture in providing these quality facilities.

“You are truly a role model and we are very proud of you”, the Council boss said.

Also in appreciation of the quality and proactive representation of his people at the National Assembly, Rt. Hon. Ndudi Elumelu was honoured with a chieftaincy title of Okaomei of Ejeme-Aniogo kingdom by the Traditional ruler in conjunction with his Council.

Also at the event included, the Member representing Aniocha South State Constituency in the State House of Assembly, the State Commissioner for Art, Culture and Tourism,  Some members of the State Executive of the PDP, and notable leaders of the Federal Constituency.