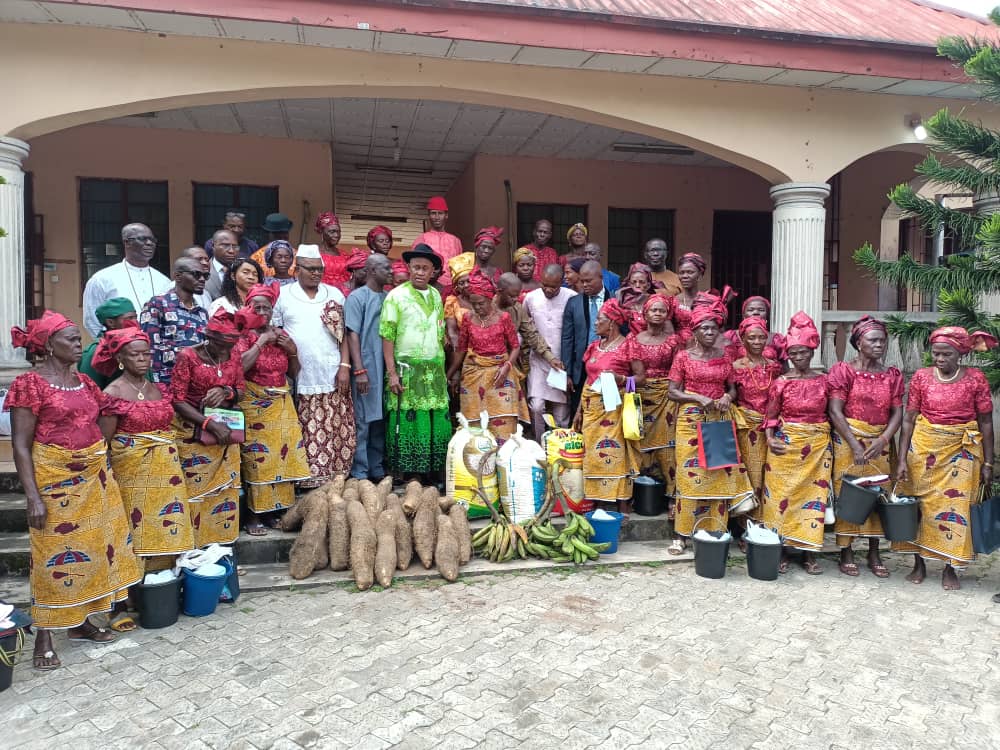 Clad in their native Urhobo wrapper, the colourfully dressed women at the wee hours of the day marched from the centre of the sleepy community to the institution with songs appreciative of good work of Prof Ogujor in the Polytechnic.

The women didn’t come empty-handed but with pack full of various food items ranging from tubers of yam, plantains and three bags of garri to demonstrate their gratitude over the Rector’s results-oriented leadership.

All roads led to the Polytechnic which was established alongside two others in Ozoro and Ogwashi-Uku by Chief Ibori’s administration in 2002.

The women were full of praises for Prof Ogujor for his outstanding developmental strides and sustained peace in the institution which they said has positively impacted the entire community.

Commending the Rector and his management for improving the image of the institution, the women eulogised Prof. Ogujor for building enduring infrastructures, promotion of academic excellence and sustained peace on campus.

Madam Grace Agogo, spokesperson for the women, could not hide her joy when she said “he is the best Rector we have seen”.

She said, “We’re here to appreciate our son and Rector of our polytechnic for what he has been doing in the school. He’s the best Rector we have seen. We, Evweya of Otefe-Oghara, decided to dance here today to appreciate him and his team. We have never done this to any previous Rector.

“Over the last four years, the community has been enjoying peace with the students. When someone is doing what is right and good, it’s good to appreciate the person. Though we are old, we are not blind. We are seeing the development taking place within the school.

“We thank our governor (Senator) Ifeanyi Okowa for appointing him. When his (Ogujor’s) tenure is over we want his kind of person to continue.”

As if that was not enough, the women at the historic occasion, poured more encomium on the Rector and his management team for ensuring quality infrastructural development as well as the establishment of water factory within the campus.

Corroborating the women that Oghara people were pleased with his performance as Rector of the polytechnic, Senior Special Assistant (Special Duties) to Governor Ifeanyi Okowa and an Oghara elite, Chief Duncan Ewhere, said, “Oghara people are very hospitable people. This is historic because Evweya (women) have never done this in the history of the school. It shows they are happy with the way you’re running the affairs of the school. Aside the women, Oghara people are happy and we commend you for what you are doing.”

In his response, an elated Rector, Prof Ogujor, thanked the women for the visit, and commended them for their continued support and prayers for the growth of the school.

He attributed the development recorded so far in the institution within his over four years reign to the collaboration of management staff as well as the support of Governing Council and Governor Ifeanyi Okowa love for education.

Flanked by his mother, Madam Rebecca Ogujor, the Rector also commended former Governor James Ibori, Ovie of Oghara and the people of Oghara for their immense contribution towards the growth and development of the institution.

Highlights of the ceremony include prayers by the Otefe-Oghara women for the Rector, the management of the institution and the presentation of the food items.