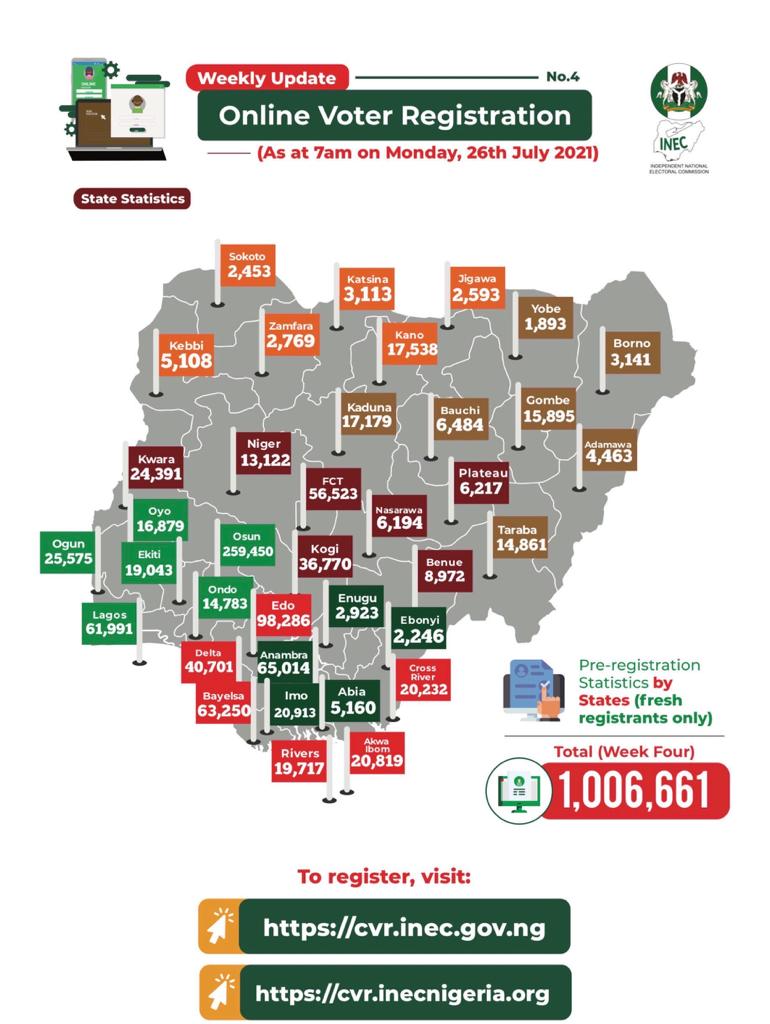 The states distribution of the online fresh registration released by INEC in Abuja  on Monday showed  that  Osun  still maintained the highest number of fresh registrants with 259,450, followed by Edo  with 98,286.

The state with the third highest number of fresh registrants was Anambra with 65,014, followed by Bayelsa with 63,250 and Lagos State with 61,991.

The News Agency of Nigeria (NAN) reports that the weekly update provided by INEC for week four also reveals  that the commission received 1,135,395 applications.

The figure of the total applications received includes those for voter transfer, requests for replacement of Permanent Voter Cards (PVCs) and update of voter information record, etc.

Also the distribution by gender also showed  that females constituted 492,449 of the received applications while males were  642,946.

It also showed  that 12,274 of the applicants indicated to be persons living with disabilities.

Mr Festus Okoye, INEC National Commissioner and Chairman, Information and Voter Education Committee, in a statement in Abuja on Monday, said  details of the distributions had been uploaded on the commission’s website and social media platforms.

Okoye providing update on the online pre-registration which started nationwide on June 28, disclosed that the commission also on Monday,  commenced physical registration at its 811 state and local government area offices nationwide.

“The detailed distribution of the registrants by age, State/FCT, gender, occupation and disability for week four of the exercise has been uploaded on  the commission’s website and social media platforms.

“As earlier announced by the commission, physical or in-person registration begins today, Monday July 26 at our 811 state and local government area offices nationwide.

“The exact locations of the designated centres have already been uploaded to our website and social media platforms.

“For further details, citizens are encouraged to contact our state offices through the dedicated telephone numbers provided in the uploaded publication.

“‘Nigerians who pre-registered online can now complete their registration at those centres based on scheduled appointments.

“In addition, other Nigerians who prefer to register physically/in-person can now do so at those centres.

“Both online pre-registration and physical/in-person registration will continue simultaneously until the suspension of the CVR exercise on June 30, 2022 to enable the commission to clean up the data and compile the voters’ register for the 2023 General Election.”

Okoye appealed to all citizens who wished to register to approach any of INEC’s state or local government area offices nationwide to do so, as the commission entered the next phase of the CVR exercise.

He said  the right to vote begins with the registration of voters.

He added that “Once again, we wish to remind citizens that the ongoing registration do not include those already registered as voters.

“The current exercise is only open to Nigerians who are 18 years and above who have not registered before.

“It is an offence under the Electoral Act for any citizen to register more than once.