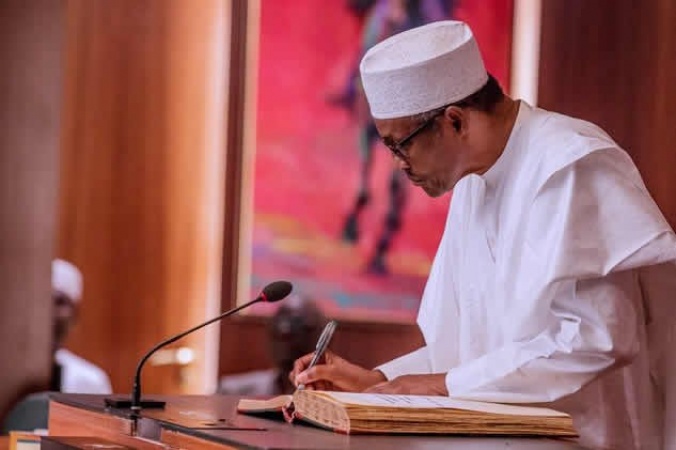 Mr Umar El-Yakub, the Senior Special Assistant to the President on National Assembly Matters, disclosed this to State House correspondents after a meeting with the President on Monday in Abuja, the nation’s capital.

The 2021 Supplementary Appropriation Act, which is targeted at the provision of military hardware and COVID-19 vaccines, comes into effect from July 26.

The budget is expected to be funded largely through new borrowing.

President Buhari’s assent to the law facilitates the critical procurement of not just security equipment but the establishment of molecular laboratories, oxygen plants, and procurement of vaccines, particularly the J&J COVID-19 vaccines.

The Supplementary Appropriation Bill passed by the lawmakers amounted to a total of N982.72 billion.

In June, President Buhari asked lawmakers in both Senate and House of Representatives to approve a 2021 Supplementary Budget estimate of N895,842,465,917 in separate letters to the leadership of both chambers.

He had explained that the budget was to fund the procurement of equipment for the military, procurement and administration of COVID-19 vaccines, and provision of additional funds for the Public Service Wage Adjustment in health and other sectors.

Thereafter, the lawmakers directed the Senate and House of Representatives Committees on Appropriation to work on the President’s request.

At a joint session of the lawmakers on July 7, the chairman of the Senate Committee on Appropriation, Senator Jibrin Barau, as well as his counterpart in the House, Muktar Betara, submitted their reports.

Meanwhile, President Muhammadu Buhari has traveled to the United Kingdom to participate in the Global Education Summit on Financing Global Partnership for Education (GPE) 2021-2025.

The Summit, which will be co-hosted by the Prime Minister of the United Kingdom, Boris Johnson, and the President of Kenya, Uhuru Kenyatta, will bring together Heads of State and Government as well as stakeholders and youth leaders, and provide a platform for partners to chart a way forward towards transforming education systems in partner countries, through exchange of best practices.

Femi Adesina, Special Adviser to the President (Media & Publicity), in a statement on Monday said that the summit will also offer the opportunity for leaders to make 5-year pledges to support GPE’s work to help transform education systems in up to 90 countries and territories.

After the Summit, the President will spend a few days for an earlier scheduled medical check-up. He is due back by second week of August, 2021.