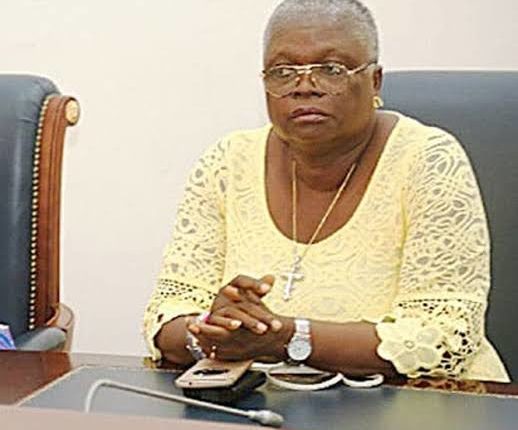 The Minority Leader of the House of Representatives, Hon. Ndudi Elumelu has expressed great shock over the demise of Mrs. Omatsola Williams.

Hon. Elumelu in a statement he personally signed, said that the news of the passing of the former Commissioner for Women affairs and Social Development in Delta State, was a sad development, and noted that her death is a great loss for the people of the State.

He described Mrs Shola Williams as a great political mobiliser who devoted the better part of her life to the political development of Delta state, and said that by her death, the state has missed a great woman with great love for the people.

“I received with great shock the news of the passing of a great woman, Mrs. Shola Williams, who has contributed immensely to the political development of our dear state, Delta.

“Mrs. Shola Williams was an excellent golfer, a founding member and one of the most highly decorated players of the Ibori Golf and Country club. She will be greatly missed for her compassion and selfless service to the Government and people of Delta State.

“Mrs. Shola William’s contributions to the development of women and the Youth in Delta
State are immeasurable and will continue to resound,” Elumelu stated

Hon. Elumelu consoled the Children, the entire Williams family and indeed the Government and people of Delta State, urging them to remain steadfast in the Lord God Almighty and said that Mrs. Williams lived a godly life worthy of emulation.

“Mrs. Shola Williams demise was a sad development, however, she has contributed her quota to the development of humanity, she has stamped her feet on the sand of time and her efforts will continue to resound.

“Let us be consoled by this fact and for the obvious truth that she lived for God and has gone to meet with her creator who in His mercy will grant her eternal rest.

“May her soul and the souls of the faithful departed rest in the bossom of the Lord God Almighty,” Hon. Elumelu prayed.

Gbaramatu Kingdom To Chevron: ‘Your Oil Spill Is Killing Our People’, No Oil Sheen On Water Not From Our Assets – Chevron