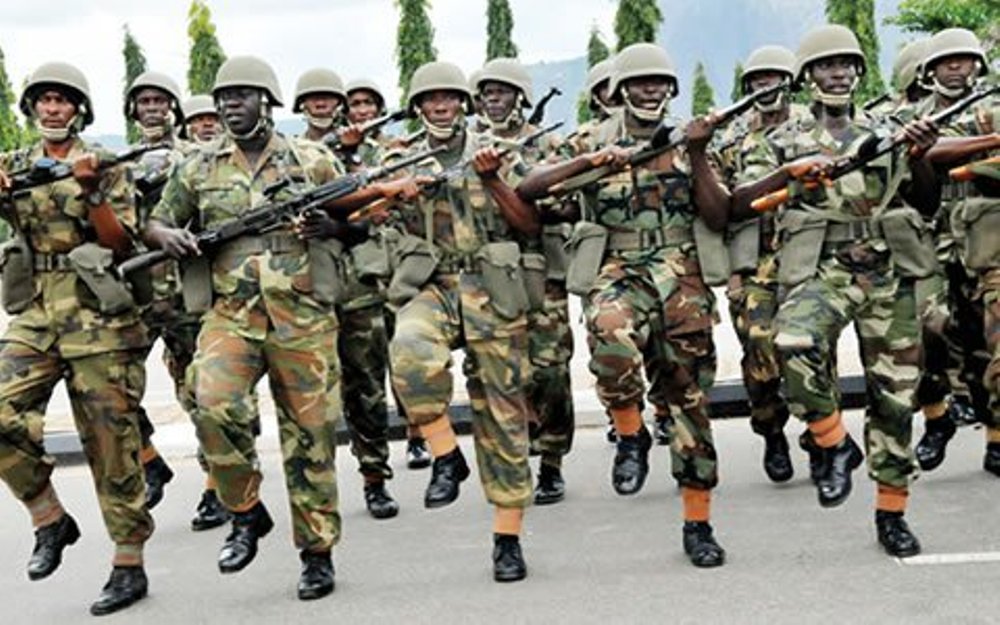 Nigerian Defence Headquarters, (DHQ), has announced a ‘major breakthrough’ in military operations in Northwest in the second half of 2020.

From the dossier, troops of Operation Sahel Sanity destroyed 197 terrorists’ hideouts, killed about 220, arrested 892 suspects and recovered a large number of cache of arms.

Bernard Onyeuko, a Brigadier General and the Acting Director, Defence Media Operations disclosed this at a news conference held at the Army Special Super Camp 4 in Faskari Local Government Area of Katsina State on Wednesday.

He stated that the operations were carried out from July 1, to December 31, 2020.

According to him, 197 gunmen’s camps and hideouts including the notorious Dangote Triangle and several terrorists’ logistics bases were also demolished by the troops during the period.

“… a total of 7,761 cows, 1,867 sheep/rams and four Camels were recovered and given back to the owners by troops within the period,” Onyeuko added.”

He expressed joy that a “total of 642 abducted victims were rescued by the troops, which he noted included the rescued 344 students of Government Science Secondary School Kankara.

Within the period, Onyeuko stated that the troops successfully foiled 165 terrorists’ attacks and 81 kidnap attempts.

He recalled that Exercise Sahel Sanity was inaugurated by the Chief of Army Staff, Lt.-Gen. Tukur Yusuf Buratai on July 6, 2020 to consolidate on the existing Operation Hadarin Daji.

He explained that the exercise was aimed at effectively flushing out bandits, kidnappers, cattle rustlers and other sundry criminals from the region.

According to the Director, these acts of criminalities orchestrated by the gunmen have hitherto posed danger and threats to the peace and security of the people, thereby, crippling social and economic activities in the region.

He stated that the exercise which subsequently dovetailed into a real time operation had significantly brought peace and stability to the affected states of Zamfara, Katsina and Sokoto.

According to Onyeuko , the troops within the period under review carried out a series of clearance operations, ambushes, farm and other aggressive confidence building patrols within Sokoto, Katsina, Kebbi, Kaduna, Niger and Zamfara States.

He said the troops also carried out some Civil Military Cooperation projects and activities to support some host communities within the operational area of Operation Sahel Sanity.

The activities, he said, involved distribution of palliatives to locals and renovations of medical facilities at Faskari and Kauran Namoda communities in Katsina and Zamfara states.

Onyeuko added that the troops also conducted medical outreaches and distribution of palliatives to locals and flood victims at Koko-Besse and Bagudo Local Government Area of Kebbi State.

He disclosed that compensation had also been paid to farmers whose farmlands were affected as a result of the ongoing operation and due to the expansion of the Special Army Super Camp IV in Faskari, Katsina State.

He however, said that two officers and four soldiers paid the supreme price in the cause of defending the country during the period under review.

“After diligent review of the numerous successes achieved so far and the need to finally eliminate all the remnant security challenges within the region, the COAS has graciously extended the duration of the operation to last till March in order to consolidate on the gains so far achieved,” he added.

NIN: NIMC Charges Nigerians N25,000 For Correction Of Date Of Birth, Others

US Congress In Turmoil As Trump’s Supporters Invade Capitol Building