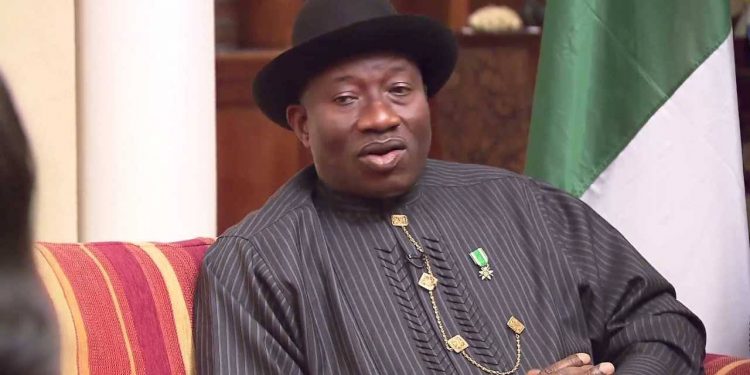 The ruling All Progressive Congress (APC) has dropped former president Goodluck Ebele Jonathan’s name as a “progressive statesman” working for the party and President Muhammadu Buhari’s government to shore up its wane image and to counter criticise the opposition PDP.

BIGPENNGR.COM reports that APC is trying to use Jonathan’s recent ‘political romance’ with the ruling party to shore up its diminishing ‘progressive’ image following recent diatribe from the PDP over APC governor’s visit to the former president.

Speaking as a guest on Channels’ Politics Today’s programme, the Deputy National Publicity Secretary of the APC, Yekini Nabena, spoke about the PDP claims over the visit of APC chieftains to ex-President Jonathan’s residency.

The PDP had called the APC “desperate” for visiting Jonathan, who was a president under the aegis of the PDP, on the celebration of his 63rd birthday.

BIGPENNGR.COM reported that in an earlier statement, the PDP claimed that the visit by Governors elected on the platform of the All Progressives Congress to former President Goodluck Jonathan has further affirmed that Nigeria, as a nation, is better under the governance of the PDP.

The visit, which the party described “is a clear endorsement of the acceptability of the PDP administration, also indicates that the APC, in 2015, only created artificial symbols of misgovernance, corruption and other alleged misgivings just to discredit our party and grab the levers of power to achieve their selfish desires”.

A statement by its spokesman, Kola Ologbondiiyan, had said: “It is evident that the Jonathan administration succeeded in office basically because our party understands the nuances of our nation, which we translated into people-oriented polices and programmes, in line with the manifesto of our party, to make life comfortable for Nigerians.

“This visit to Jonathan by the APC governors is a direct acceptance of the successes recorded by our party in building a strong nation with a virile economy that was rated as one of the fastest growing economies of the world.

“The visit is therefore a subtle step by APC governors into the corridors of the PDP in agreement that our party holds the solution to the myriads of problems brought to our nation by their APC and President Muhammadu Buhari.

“The PDP therefore receives the visit by APC governors as an apology by the APC to our party and Nigerians over the lies, beguilements and other irresponsible allegations deployed by the APC to grab power, only to lead our nation on a journey to nowhere”, the party had said.

The party had also expressed concerns that Jonathan, who has only one chance left to contest for president again, was being courted with the party’s presidential ticket for 2023, according to report.

Jonathan became the first incumbent to lose the presidency by the ballots when he lost to APC’s Muhammadu Buhari in the 2015 general elections.

But Nabena, in the programme, maintained that the APC were not “desperate” and Jonathan had been working for Buhari’s government. “He has been going to all African countries,” Nabena said.

“If he is not a progressive person, he won’t have been working for this government.” Nabena, in an earlier statement, had advised the the “failed” PDP to concentrate on picking itself up from its crisis of confidence rather than concern itself with the courtesy visit of the APC to the ex-president.

The PDP Deputy National Publicity Secretary, Diran Odeyemi, who was also featured on the programme, countered that the failure of the APC on security and the economy leaves the PDP unbothered and assured that more APC governors would defect to the PDP ahead of the 2023 elections.

“Nigerians know the party to vote for in 2023. We believe power belongs to the people and we are relying on the people to make the decision in ‘2023 presidency’,” he added.

It could be recalled that the former president had said that the APC governors’ visit to his residency was to celebrate him and not for any political party affair in a terse statement by Ikechukwu Eze, his media aide. Jonathan had discarded the rumor he had intention to join the ruling APC or contest in the 2023 Presidential election.

“Anything you are hearing about 2023 is a rumour and we don’t have time to be responding to rumours; the former president is a very busy person to be listening to rumours,” the statement reads.