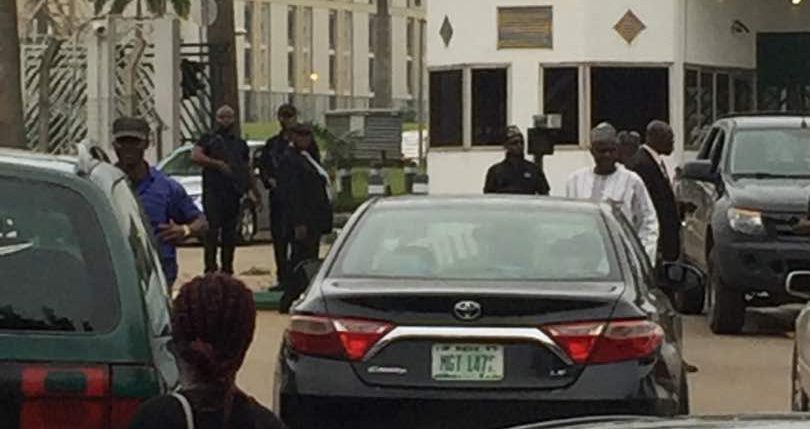 Operatives of the Department of State Services are at the moment preventing Senators, members of the House of Representatives and workers from entering the National Assembly.

The operatives, The Eagle Online is reporting, had been stationed there from about 2am.

This was shortly after an aide of the President of the Senate, Dr. Abubakar Bukola Saraki, raised the alarm about a meeting between the Director General of the DSS, Lawal Daura, and about 30 senators elected on the platform of the All Progressives Congress.

According to available information, the National Chairman of the APC, Adams Oshiomhole, was also at the meeting held at the Headquarters of the DSS in Abuja.

It was said the plot was to remove Saraki and replace him with the Senate Leader, Ahmad Lawan, while Senator Hope Uzodinma, was pencilled down to replace the Deputy President of the Senate, Dr. Ike Ekweremadu.

One of those prevented from entering the National Assembly was Senator Rafiu Ibrahim, who came out of his vehicle, identified himself to the operatives.

Saraki had on Monday announced the reconvening of the leadership of the National Assembly after a break was announced on July 24.