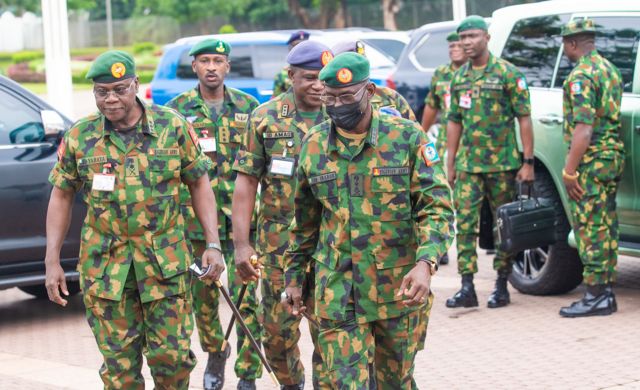 Since the country’s independence from the British Empire in 1960, there have been a large number of successful and failed military coups in Nigeria. A military coup, for the benefit of hindsight, is the violent or non-violent overthrow of an existing political regime by the military.

Between 1966 and 1999, the army held power in Nigeria without interruption apart from a short-lived return to democracy between 1979-1983. The January 1966 coup was carried out by mostly Igbo army officers including Major Kaduna Nzeogwu, Major Emmanuel Ifeajuna among others.

The casualties of the coup included the Prime Minister Alhaji Abubakar Tafawa Balewa, the Sardauna of Sokoto Sir Ahmadu Bello, the Premier of the Western Region Samuel Akintola, the finance minister Festus Okotie-Eboh among others.

General Yakubu Gowon was ousted in a palace coup on July 30, 1975, which brought then Brigadier [Murtala Muhammed] to power as Head of State.

The 1976 coup is popularly and erroneously known as the ‘Dimka Coup’. This bloody and aborted coup led to the assassination of General Murtala Muhammed. Upon General Muhammed’s death and the foiling of the coup, then Lt General Olusegun Obasanjo became Head of State.

The August 1985 palace coup was led by then Chief of Army Staff, Major General Ibrahim Babangida who overthrew the administration of Major General Muhammadu Buhari.

After decades of military interregnum, Nigeria returned to democratic rule in 1999, and has since enjoyed 23 years of unbroken democracy.

The economic effects of military rule were disastrous, if truth must be told. As a result of the military economic policy of the 1980s, 45% of foreign-exchange earnings were going into debt servicing and there was very little growth.

This led to a rise in poverty, crime, child abuse, disease, institutional decay and urban dislocation. The instability and dissatisfaction caused by these policies was one of the causes of the consistent pattern of coups.

And with the 2023 general elections already looming, the Chief of Defence Staff, CDS, General Leo Irabor has advised politicians and certain segment of the populace, who still think that the Nigerian Military has that ambition of delving into the political arena, to forget it, as such thinking and belief were now archaic.

“The Armed Forces of Nigeria is a creation of the constitution and we are subject to the constitution. In the past, there had been certain circumstances, which people thought encouraged the military’s foray into politics. Some people still think the same should apply. But that thinking is archaic.”

Speaking when the President of the Nigerian Bar Association, NBA, Mr. Yakubu Maikyau, SAN, paid him a courtesy visit, the CDS said: “Since 1999, there has been an incremental and positive socialization of the Armed Forces and we are not there yet in terms of perfection because no mortal can certainly be perfect. But I think within the grasp of professional extents, we remain on the upward trajectory.

“Not just because of the commitment that we have made by virtue of the oath and the ethos of our existence as an Armed Forces, we believe that on an incremental basis, we should work on ourselves, look at the mirror and evaluate ourselves to see what our performances have been and see what level we need to attain and benchmark all our activities and actions.

Gen Irabor noted that with the progress made by the military in restoring peace in the country and creating the enabling environment, “In no distant time, you (Nigerian’s) will begin to see a gradual reduction of the military in internal security space, giving more room for the Police to do the work.

“I am glad there is a reversal of the threats and security challenges confronting the country. We are making gains and we will continue to make the gains.

“We are hoping that never again will we have what we saw in the past, where it was becoming as if the nation’s security architecture was greatly in peril to the extent that we almost become helpless.”

On the 2023 general elections, the CDS told the NBA delegation, “We have been working very closely with the Police and INEC. The Police remains the lead law enforcement agency in that exercise.

“We remain subject to the civil authority, we are men and women of the law, obeying the constitution and ensuring that the democratic values are protected and advanced.

“I believe that under your leadership, the NBA will transform to such an extent that critical value addition will be noticed in the processes of adjudication of criminal justice in the light of the fight against terrorism, insurgency and other related cases, so that there would be a huge value in content that would be brought into the orderly disposition of our country.”

Earlier, the NBA President disclosed: “The armed forces of Nigeria are one of the institutions we are very proud of because they have sworn to protect the territorial integrity of the country. They have been laying down their lives to defend the existence of Nigeria.

We have come to identify with the excellent work that the armed forces are doing and the sacrifice of upholding and promoting the rule of law. You have defended the integrity of this country.

“There are certainly challenges here and there, but it is more discerning for every Nigerian to say a big thank you to the military. In the North East peace is returning. In the North West, sanity is being restored.”

Mahmud is the Deputy Editor of PRNigeria, and wrote in via: babasalam1989@gmail.com

THE UNTOLD STORY OF POLICE, DSS RIVALRY IN OSUN STATE