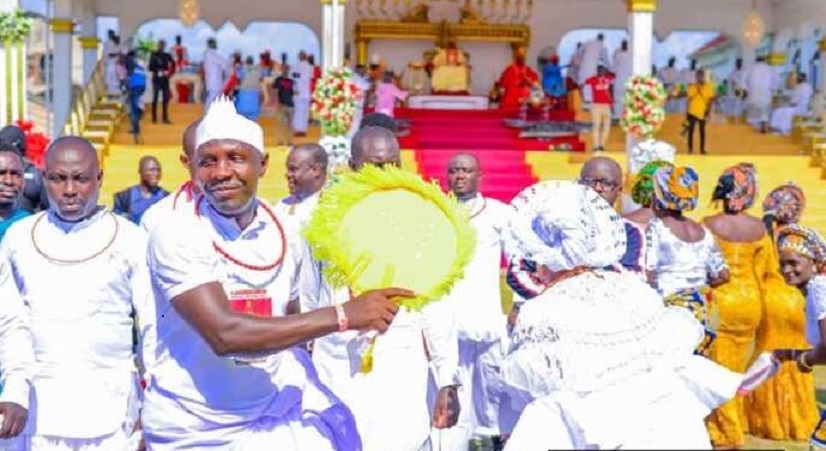 A nongovernmental organisation floated by a former Niger Delta militant commander, Chief Government Ekpemupolo, alias Tompolo, has provided 150 million naira in aid to flood victims in the states of Bayelsa, Rivers, and Delta.

Dr. Paul Bebenimibo, the executive secretary of the Tompolo’s Foundation, distributed the supplies, which included 2400 bags of rice, 100 bags of beans, 200 bags of garri, 5000 tubers of yam, 200 kegs of palm oil, 600 cartons of groundnut oil, and 2000 cartons of indomie noodles.

The foundation established by Tompolo, is designed to provide aid to the underprivileged in the Niger Delta region and has embarked on provision of equipment to schools and hospitals in Delta’s riverine areas in the past.

Dr. Bebenimibo, Executive Secretary of the Tompolo Foundation, who delivered the gifts on behalf of Tompolo, said the donation was made to lessen the effects of the flood on people living in oil-rich states.

The items, which Dr. Bebenimobo gave to Representatives from the various States for distribution to the flood beneficiaries, will help the flood victims who are gradually going back to their various communities, he said.

The Tompolo Foundation had similarly demonstrated its generosity to the victims in the Isoko, Urhobo, and Ndokwa Nations, he continued.

Dr. Bebenimibo said that the aid materials were also given to flood victims in Ahaoda West and East in Rivers State.

He mentioned that the flood victims in seven of the state of Bayelsa’s eight local government areas would also be receiving 600 bags of rice and other supplies.

Dr. Bebenimibo expressed faith in the capability of their representatives to deliver the aid supplies to those in need without diverting them.

According to Dr. Bebenimibo, “We have good tidings from the president and chairman of Tompolo Foundation.” It’s no longer news that our country was greeted with a massive flood, and the impact was overwhelming. People have been in serious disarray in Bayelsa State, Rivers State, and Delta State. The Tompolo Foundation is established to care for the less privileged.

“We have been on this mission for about ten years. Specifically, sometimes in 2012, a similar flood came. The foundation was established to provide palliatives for the people. And this year we have come again to do our beat.

“I want to inform you that the President and chairman of Tompolo Foundation have approved a palliative worth 150 million naira to distribute to the good people of Bayelsa State, Rivers State and Delta State. And that’s why I had earlier recognized people that are representing these States and we are here to handover items to the beneficiaries so that they can move them to their destinations and distribute them to the affected people over there.”

In his comment, a member of the Bayelsa State House of Assembly representing the people of Constituency 4, Southern Ijaw local government area, High Chief (Hon.) McDonald Igbadiwei, thanked the Tompolo Foundation for the donation of items to victims, particularly for coming to the aid of the victims affected by the flood in his domain.

He said that the governor of Bayelsa State spent about a billion naira to help the flood victims in the State and commended Tompolo for single handedly sponsoring over N150 million worth of items to flood victims in three states.

Igbadiwei emphasised how unusual the recent flooding in the area is and contrasted it with the circumstances in Pakistan.

In an interview with reporters, the chairman of the Burutu Council, Hon. Godknows Angele, also expressed gratitude to the Tompolo Foundation for their donation of aid supplies to the flood victims in his region. We expected some leaders to act in this manner, he said.

He said, “Today, Tompolo has come to the aid of the people,” noting that the locals had suffered greatly as a result of the flood that had decimated their communities.

Chief Vincent Oyibode, a commissioner who represents the Urhobo ethnic nationality on the board of the Delta State Oil Producing Area Development Commission (DESOPADEC), thanked Tompolo for the kindness shown to ethnic groups other than the Ijaw people and said, “He is a good man.”

According to them, residents of the council areas of Bomadi, Burutu, and Patani, Isoko communities suffered grave disaster as a result of the flood that destroyed their homes and agricultural lands.