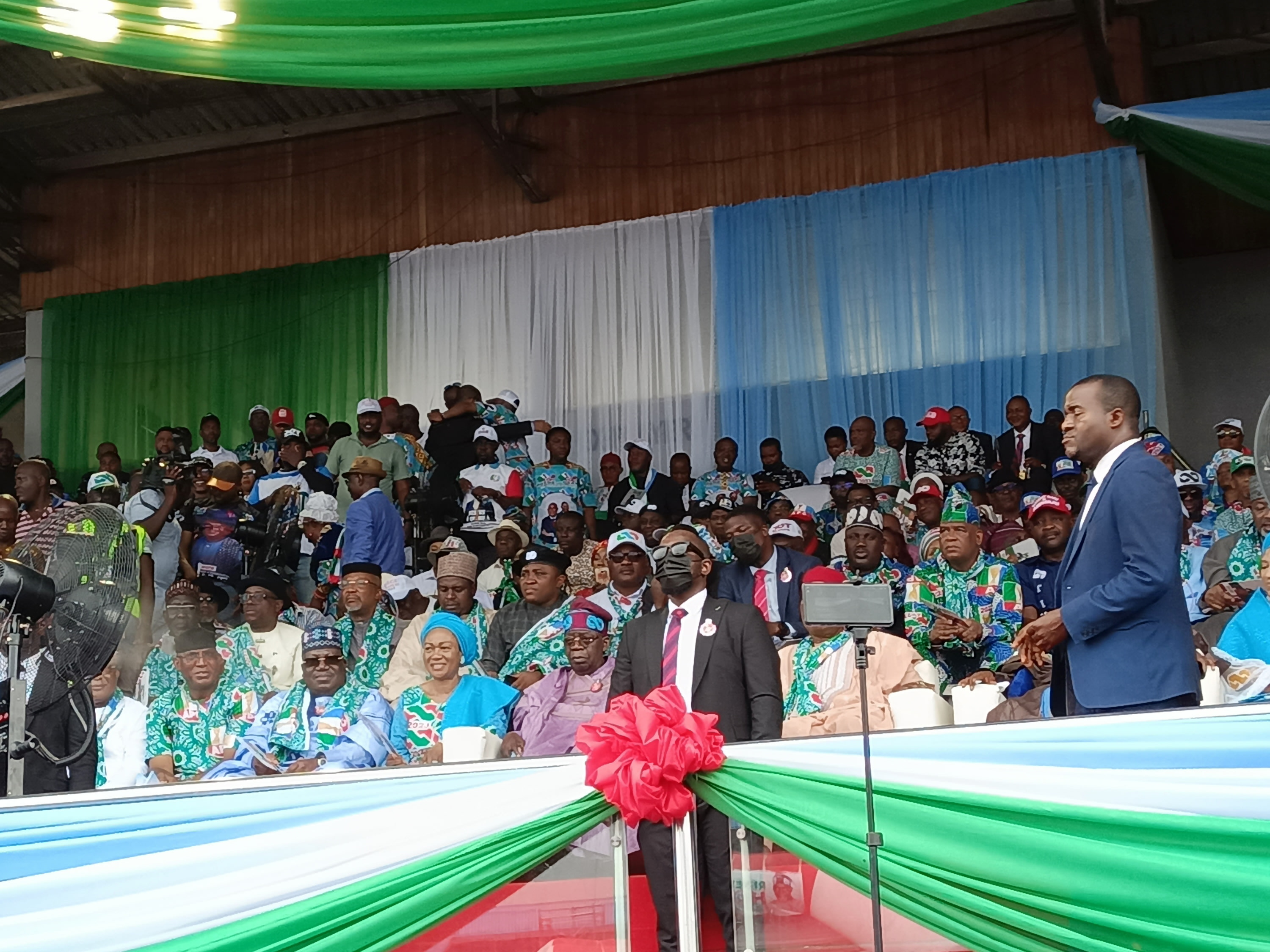 The People’s Democratic Party’s (PDP) presidential candidate, Alhaji Atiku Abubakar and his running mate, Dr. Ifeanyi Okowa, came under heavy fire on Saturday from Asiwaju Bola Ahmed Tinubu, the presidential candidate for the All Progressives Congress, who claimed that both politicians had used the state as an ATM to draw funds for their unsuccessful presidential campaign.

Tinubu claimed that the opposition PDP has abandoned infrastructure development in the state and has left it to rot away, accusing Okowa of putting the state into enormous debt.

This was stated by the APC standard-bearer during a large rally held on Saturday at the completely packed Warri Township Stadium.

Addressing the rally, Tinubu said: “Delta is among Nigeria’s largest oil and gas producing states. Revenue from oil and gas has historically been the backbone of government revenue and foreign exchange earnings.

“As such your state and other oil producers have made a one-of-a-kind financial contribution to the building of modern Nigeria. The nation is thankful to you.

“Delta has all it takes to be great and help lead the nation forward. Yet, for the past twenty-three years, those governing your state have taken you for a hard and long ride by selling you short. They have not done the things they should have and could have done for you.

“The infrastructure in the state was better 30 years ago than it is now. The state has recorded historic debts run up by the incumbent yet the infrastructure and other things still remain lacking because of under investment and neglect.

Slamming PDP presidential candidate Atiku Abubakar, Tinubu continued, “The money is much but it does not have legs. Where did it go? Not to your welfare. “Perhaps, it has found a home with a certain presidential candidate who loves Dubai more than Nigeria. But Delta State is not an ATM for migratory politicians. It is a place where good and hardworking people reside and work to create decent and peaceful lives for themselves and their families.”

However, in order to prevent the host communities from suffering as a result of the nation’s economy being built on their oil, Tinubu pledged to reactivate the gas revolution industrial park and oversee the cleaning of the entire Niger-Delta region.

At the rally, APC candidate for governor in the state, Senator Omo-Agege, said the governor of Delta had failed the state and should resign.

He argued that Delta under Okowa had developed into the nation’s capital of poverty and slums and urged residents to support Tinubu and all APC candidates in the general elections of 2023.

Okowa’s ambition to become Nigeria’s vice president in May 2023 was referred to by Omo-Agege as an “ill-fated adventure,” noting that he had betrayed the South.

The two-term Delta State governor, according to the Delta APC governorship candidate, is a “today’s Judas Iscariot,” and “should resign from Atiku Abubakar’s ticket immediately.”

Senator Oluremi Tinubu, a native of the area, spoke to the crowd in Itsekiri and urged them to support the APC so they could elect one of their own to positions of authority.