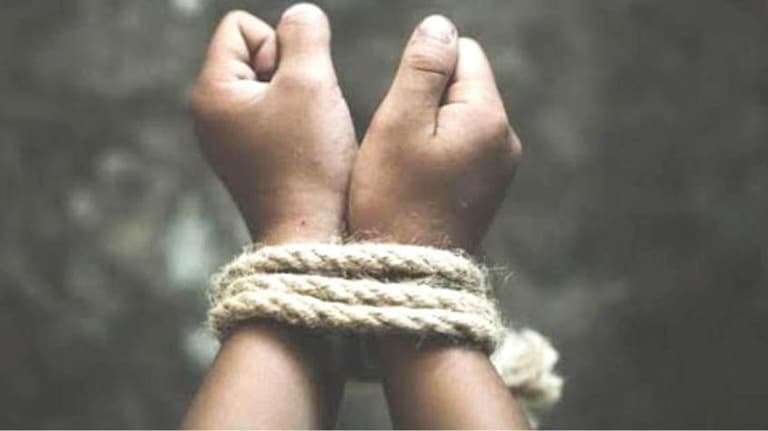 Akwa Ibom State police command, on Friday, said a 40-year old woman, Mrs Joy Emmanuel, confessed to have allegedly conspired with others to kidnap her husband for perennially starving her of sex and house keeping money.

www.bigpenngr.com reports that the Mrs Emmanuel, who is currently cooling her heels at police cell, told police interrogators that she conspired with accomplices to kidnap the husband and thereafter demanded a N10m ransom for his release.

The suspect, was paraded alongside 29 others for various offences such kidnapping, robbery and child theft, by the state commissioner of police, Olatoye Durosinmi, at the command headquarters Uyo.

She alleged that the victim had subjected her to doing all sorts of menial jobs to fend for herself and the children whilst he went off to married another woman.

Mrs. Emmanuel told police investigators that when one of her children finished secondary education, there was no money to send him for further studies.

“I had arranged for my husband’s kidnapping because for a long time, he had abandoned me with his children. Even when my father and mother in-laws were alive he abandoned me. He never cared for his children. I engaged in menial jobs such as weeding in people’s farm to feed his children and pay their school fees.

“One of the children finished from secondary school and I approached my husband to plan how to send the son to learn trade since the father refused to send him to university; but my husband shunned me.

“The major reason I arranged for his kidnap is that my husband refused to have sex with me and does not take care of me and the children.”

“The kidnappers that collected the ransom of N2million never gave my share and I don’t even see the money. It was when the kidnappers were sharing the N2m that the police arrested them and they mentioned me. They never gave me any part of the ransom collected from my husband,” she explained.

Continuing, Mrs Emmanuel said; “The leader of the kidnapping gang identified as Udo Moji (now at large) assured me that he would collect the money from my husband for me since my husband attacked me and poured away soup in the pot.

“So, I agreed with him and he kidnapped my husband. I ran around to gather money to pay the kidnappers. The main suspect, Udo Moji ran away.”

Narrating his ordeal, husband of the suspect, Emmanuel Ebong who hailed from Ntak Obio Akpa in Oruk Anam local government area, Akwa Ibom State said; “I was kidnapped on July 21, 2022 in my compound. I came back from treatment because I was weak. Around 8.30pm, I saw about six people in my compound. They struggled with me and released two gun shots into the air, and I struggled with them before they took me out of my compound in a mini bus and drove away.

“They kept me from that Thursday till Sunday and demanded N10m from me and later reduced it to N2m before the police came that day. If not God, they would have killed me.

“They took me to Etinan where they caged me. I thank the Nigeria Police for the rescue operations. I also thank my village head. I don’t know the reason they kidnapped me, they collected N2m from me. The police later recovered over N500,000 from them.”