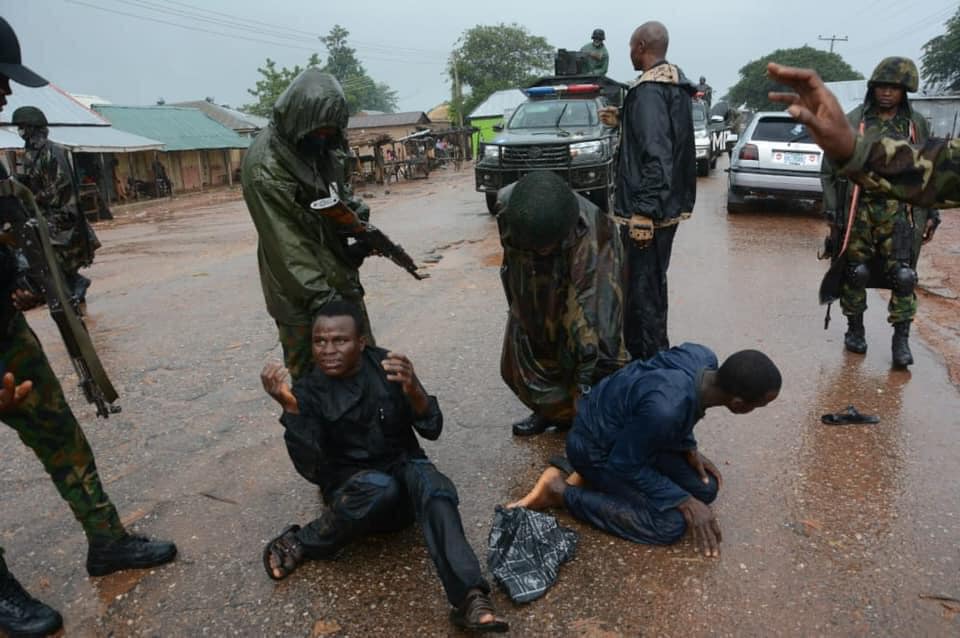 Some Nigerians are wondering why the tables have turned and why the Nigerian Military is recording its current victories against Bandits and Terrorists. To explain these victories one will have to go back to an important meeting that took place this month of August, when the plan and the strategy of, ‘OPERATION SHOW NO MERCY’ was hatched and coined.

On August the 4th 2022 the Nigerian Air Force (NAF) launched an all out military offensive codenamed ‘OPERATION SHOW NO MERCY’. This military operation was aimed at the mindless marauding bandits and terrorists who have been – kidnapping, robbing, raping and killing Nigerians.
The Chief of Air Staff, Air Marshal Oladayo Amao, launched the operation with NAF operational commanders in the various theatres of operation. During the meeting he charged the senior air troops to ensure that they employ maximum firepower against the terrorists.
He said launching an offensive operation against the adversaries would deny the terrorists freedom of movement, adding that it would also boost the confidence of the populace and ensure a peaceful country. He explained that the security environment remained fluid and uncertain with terrorists moving between the northeast, northwest and north central. He, therefore, noted the need to continually modify NAF’s air power strategies in order to stay ahead of the asymmetric and unconventional nature of terrorists’ activities.
His own words, “We have a responsibility to secure our nation and give our citizens a sense of hope, trust and belonging. Therefore, we must ensure that we stay ahead of the enemy and envisage his next line of action. I, therefore, charge you to SHOW NO MERCY against any terrorist and their accomplices while also denying them the freedom of movement and ease to cause mayhem against innocent Nigerians,”.
The Operation:
The current operation is intelligence driven and its primary focus is to go after Terrorists, Bandits and most importantly their Warlords through reconnaissance.
Reconnaissance is a mission to obtain information by visual observation or other detection methods, about the activities and resources of an enemy or potential enemy. Aerial reconnaissance which the Nigerian forces have successfully used in, ‘OPERATION SHOW NO MERCY, is reconnaissance carried out by aircraft and other aerial surveillance vehicles. The purpose is to survey and map out particular terrains, for offensive strikes such as observing tangible – structures, weapons, vehicular movements, human movements and enemy forces.
Through these surveillance vehicles the Nigerian military have been able to identify bandit warlords and their hideouts. The next stage is to send in the Tucano Super Fighter Jets to neutralise enemy forces. In just four (4) week, four notorious warlords have been neutralised.
However bombing the terrorists from the air is only half of the plan. The next plan of the strategy is to send in the infantry, the foot soldiers to neutralise the fleeing terrorists and secure the territory. And that is exactly what the military is doing in Yobe and Kaduna States in these photographs just posted. What you see is the mopping up exercise. The fleeing bandits are in complete disarray. Many are trying to cross the border into the Lake Chad Basin but fortunately there is no hiding place in that region because the Tucano Super Fighter Jets have been bombarding the Tunbun area of the Lake Chad Basin where ISWAP have tried to setup its permanent headquarters. Today that area is systematically being wiped out from the air.
Please note, ‘OPERATION SHOW NO MERCY’ is the current Nigerian military airforce campaign in the North East, North West and North Central States of Nigeria.
Despite these series of recent successes this war is far from over and the Nigerian military is expecting reprisal and revenge attacks from the enemy. Our forces actually welcome such attacks because it will only expose the hideouts of a weakened enemy on its way out.
We understand that we are communicating with some incurable skeptics, those Nigerians especially on Social Media who have refused to acknowledge the tremendous effort this government has made and is making in combatting this insurgency. The current successes and victories of our military forces are undeniable. We therefore urge those skeptics not to play politics with our National Security because TERRORISM HAS NO POLITICAL PARTY. Security is the business of every Patriotic Nigerian.
In this Report we are presenting fresh photographic evidence of the ongoing military onslaught. This is the evidence some Nigerians have been demanding. Below are military updates.
•••••••••••••••••••
ONYEMA NWACHUKWU
Brigadier General
Director Army Public Relations
30 August 2022
YOBE STATE SECURITY REPORT:
Troops Record Another Success –
The troops of Operation Desert Sanity on Monday 29 August 2022 neutralized several ISWAP/BokoHaram terrorists during a successful night ambush operation around Tamsun Ngamdu general area in Yobe State. Troops also recovered weapons, ammunition, mobile phones & a motorcycle.
KADUNA STATE SECURITY REPORT:
Army Fighting Patrol Neutralise Bandit In Kaduna –
A fighting patrol led by the General Officer Commanding (GOC) 1 Division Nigerian Army, Major General Taoreed Lagbaja accompanied by a team of Operational commanders and operatives have cleared bandits in Buruku, Udawa, Manini, Birnin Gwari, Doka, Maganda, Kuyello and Dogon Dawa communities in Kaduna state, while on a fighting patrol on Monday 29 August 2022.
In the fire fight that ensued during the engagements, the patrol team overpowered the bandits with superior fire power neutralizing, one of them, while three others were captured alive, as some of the criminal elements escaped with gunshot wounds. The Patrol team also recovered one AK 47 rifle, 27 rounds of 7.62 mm Special ammunition and 18 Motorcycles.
Members of the public, particularly health facilities and paramedics are please urged to watch out for persons who may be seeking medical attention for gunshot wounds and please report to relevant security agencies.

19 GBOSAS FOR THE GRANDMASTER OF DATA, BY TONI KAN