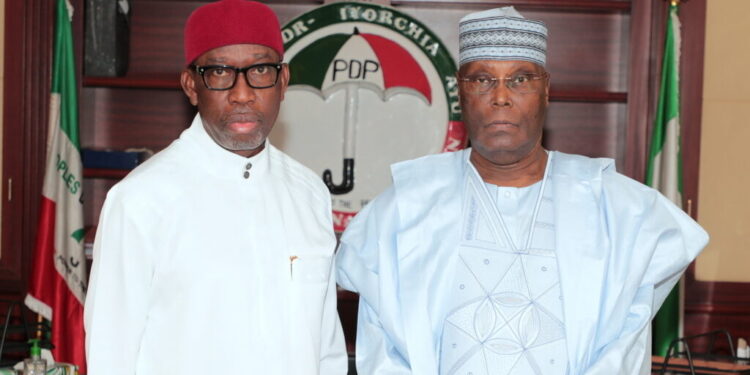 Crisis is brewing in the Peoples Democratic Party (PDP) following the nomination of Delta State Governor, Ifeanyi Okowa, as the opposition party’s vice presidential candidate for the 2023 general election.

Former vice president and PDP presidential candidate, Atiku Abubakar, yesterday, announced Okowa as running mate at a meeting of the national caucus at the PDP national Secretariat, in Abuja.

Atiku said his choice was informed by Okowa’s antecedent as former member of the National Assembly, two-term governor and appreciation of the dire strait the country was facing. He, however, said others recommended for the vice presidential slot – Governors Nyesom Wike and Udom Emmanuel of Rivers and Akwa Ibom states respectively – were eminently qualified, noting that  only one person could have been chosen for the job.

“In arriving at the decision, I held wide consultations with various stakeholders in our party, including our governors, National Working Committee, Board of Trustees, and other leaders to seek their inputs and their wisdom. In these consultations, I made clear that my running mate would have the potential to succeed me at a moment’s notice, that is, a President-in-waiting.

“The wise men and sages of the party put together by our NWC have gone fishing and brought home an enviable group of awesome politicians that surpasses these qualities. Every one of the recommended persons is a fit and proper individual to hold this office. While this makes me marvel at the bundle of talents that abounds in our party, it also compounded my task of choosing a single person from among them…

“I know that he (Okowa) will not only add excitement to our already energised ticket and campaign but will also help to bring focus, discipline and stability to our government, come 2023. I am pleased, therefore, to announce here my choice of  running mate who will help to lead us to victory next year, not only in the presidential election, but also in the governorship and legislative elections. And he will be by my side as I work hard every day to provide our people with security, revive our economy, improve education and unite our country.”

However, Daily Sun gathered that Okowa’s  choice has not gone down well with several party leaders, including governors and critical stakeholders. Mostly irked are supporters of Governor Nyesom Wike, who was originally tipped for the position.

Okowa’s emergence, it was learnt, also deepened the schism in the PDP Governors Forum, which had been polarised over who would be the vice presidential candidate.

The division became glaring, yesterday, as only Obaseki, Bala Mohammed and Udom were present at the caucus meeting where Okowa was unveiled. Makinde, Ortom, Ikpeazu, Fintiri, Ugwuanyi and Wike were absent. Enugu governor, who showed up at the PDP secretariat left before the commencement of the meeting. Some NWC members including the National Vice Chairman (South South), Dan Orbih, were also absent.

The division, it was learnt, might not be unconnected with the result that came out of Tuesday’s meeting from the special panel set up to shop for Atiku’s running mate where 13 members voted in favour of the Rivers governors as opposed to three that voted for Okowa. It was learnt that those who supported Wike, especially among the governors, were vexed by the eventual choice of Okowa who came a distant second.

Daily Sun, however, gathered that the pendulum tilted in favour of Okowa on Wednesday night, following the intervention of some northern leaders, among them a member of the NWC,  who kicked against the choice of Wike, alleging he was anti-north.

A top party source told Daily Sun that some of the grouse listed against Wike included alleged past anti-north speeches, move to domicile Value Added Tax (VAT) collection in Rivers State perceived to hold dire consequences for northern states’ economy, alleged intolerance of Islam, among others.

Wike was also perceived as a hardliner as opposed to a more malleable Okowa who will work better with Atiku to achieve his goals.

PDP chairman, Iyorchia Ayu, however, dismissed reports that the panel voted in favour of a particular person.

“The committee recommended three names to us and we transmitted those three names to the candidate. Contrary to all the speculations in the social media, the NWC did not select one name for the candidate. The choice of running mate, who will be working with him is largely his. But he graciously consulted the party, which is how it should be. And the party has made inputs and narrowed it down to three people for him to select. “Also, I want to clarify one misrepresentation in the social media. The committee did not vote throughout its sitting. It was all by consensus.”

Speaking after being named, Okowa said he would remain loyal and committed to the goal of the party to return to power. He said winning the 2023 presidential election would require great work and asked for support and commitment of party members to the cause of winning the general election.

“I want to pledge that I will stay loyal and committed to this battle and it’s a battle God has a hand in. There is no doubt that there is a great work ahead for each and every one of us. The build-back process is going to be collective and we’re trusting that all our party members would want to be part of that story at the end of the day.

Okowa had while addressing journalists after appearing before the vice presidential screening committee, said Wike would not be disappointed with his emergence.

“Governor Wike is a very strong party man.  He has great love for our party, and I believe he is also a good democrat and he understands that when several brothers are in the race for  a particular  position, it has to be one at a point in time. I want to assure you that Governor Wike is a very good man and his interest for this country and party to rise up to the challenges at the moment is strong. I do not feel he is going to be disappointed.”

Chairman, Board of Trustees (BOT), Senator Walid Jibrin, said the decision to pick a Christian as Atiku’s  running mate will unite Nigerians better.

The second republic lawmaker noted that the opposition party is greater than the APC, and urged PDP members to take the decision arrived in picking the VP as an act of God.