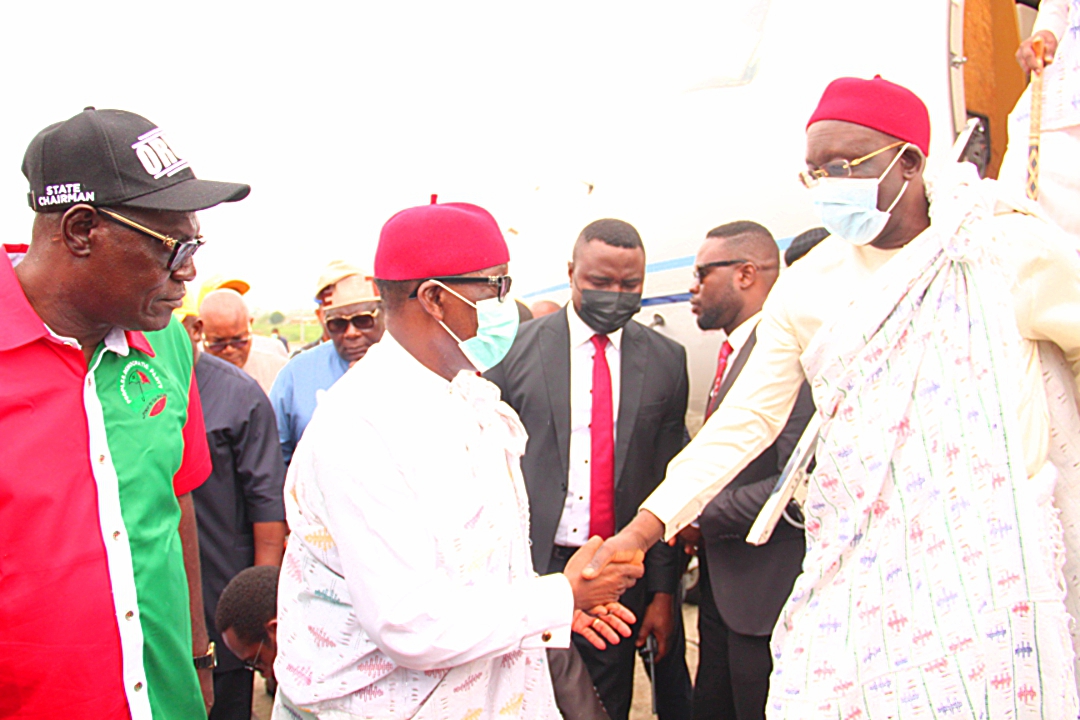 National Chairman of Peoples Democratic Party (PDP), Senator Iyorchia Ayu, has advised political gladiators against overstretching disagreement within the party’s fold that could jeopardize the chances of the party in the 2023 general election.

Ayu spoke on Friday in Asaba at the inauguration of Ralph Uwechue Road and Storm Drainage projects executed by the Governor Ifeanyi Okowa-led administration.

He said that Delta state has remained a PDP state since 1999 and would continue to be so if the stakeholders remain united and steadfast in their support for party in the forthcoming general elections.

Ayu, however, counseled against disagreements that could jeopardies the fortunes of the party in the elections, saying “since we returned to democratic governance in 1999, Delta has remained a PDP state and I congratulate all our party members in Delta for the unity that has ensured that we remain a PDP state.

“Nothing whatsoever should be done to damage the unity of purpose which has brought about this great development and our winning streak.

“It is said that divided we fall and united we stand. The PDP family in Delta must remain united and I have no doubt in mind that come next year, the Governor of this state and all members of the state and National Assembly will all come from the PDP.

“We don’t lose elections in Delta and we are not going to, particularly with the performance of Governor Okowa.

The national chairman of the party lauded Governor Ifeanyi Okowa of Delta for his commitment to the welfare of his people, describing him as a dedicated democrat.

Ayu, who was accompanied by members of the National Working Committee and Board of Trustees of the party, said only a committed democrat of the PDP family could be as concerned and dedicated to providing welfare for his people as Governor Okowa.

He said “let me thank my brother, the governor, Dr Ifeanyi Okowa, for the great work he is doing for our party and for the people of Delta state.

“I had planned to visit Delta for a long time; I was salivating because many of these projects I saw them on television.

“I am particularly happy that I am inaugurating this road named after my good friend the late Amb. Ralph Uwechue, was a great intellectual, a diplomat and journalist and he deserves the honour that Delta has extended to him.

“Delta indigenes have put Nigeria on the map in different ways, including soccer.”

“Aside road construction, he has done well in the health and education sectors but even if you do wonderful infrastructural projects and there is no human capital development, then you are not laying a solid foundation.

“Luckily for us, we have a cerebral governor who understands that you need an educated and healthy population and you have to protect that population with solid infrastructure.”

He remarked that while PDP governors were busy inaugurating projects, the ruling All Progressives Congress (APC) had nothing to offer the people other than insecurity and battered economy.

“Only in PDP you have the National Chairman going from state to state to inaugurate projects; the other parties have no projects to inaugurate.

“All they do is to give us bandits and terrorists that harass our lives and make life unbearable for our people.

“It is because of this that the PDP is determined to take control of power at every level in Nigeria in the forthcoming elections,” he stated.

On his part, Governor Okowa said that the project was dear to his heart because it had provided a permanent solution to the hitherto perennial flooding in the state capital.

He said that his administration had to undertake the project in spite of huge financial challenges when he came into office.

“Some years ago, when I came into government, precisely in 2016, I slept and when I woke up, my ADC drew my attention that the fences of the Government House had been breached in two points, because the flood water coming from Okpanam had destroyed the fences that we had on either side. And I knew that I had a problem at my hand.

“We had to call for a study to be made, that delayed us for another 12 months and by the 18th month, after the studies, we had to take a bold step.

“Today, by the special grace of God, we can now boast of roads that are passable and streets where people can now freely live in. This is
because a lot of people were actually packing out of this area.

“At the beginning, you see a drainage of about 1.6m, 1.8m square. But as you move to the end, you get to a level where you are actually having drains of about 3 meters by 3 meters or say 10 feet wide and 10 feet deep and that means conveniently, you can drive jeeps through the drains.

“Today, we no longer suffer what we used to suffer before now. This beautiful road that we came through, normally, in the rains, you can not go through.

“But today, it is no longer so because once it rains now, within 10 minutes, all the water is gone straight into the river.” he said.

The governor explained that the state prides itself in the health sector as the first state to commence contributory health insurance scheme for citizens.

“In this state, we pride ourselves in the health sector, that we are the first state to actually give life to health insurance. As soon as we came in, in 2016, we had a legislation for compulsory health insurance scheme for our people.

“The government undertook to pay the premium of all children under 5 years of age and all women who are pregnant.

“As at today, we have over one million people registered in our contributory health insurance scheme and we have become a role model for other states,” he stated.

Okowa further said that his administration upgraded three tertiary institutions to universities to provide access to tertiary education for qualified Deltans who were denied admission because of lack of space.

“We have had to upgrade three former tertiary institutions to universities. Ozoro Polytechnic to University of Science and Technology, Uzoro; College of Education, Agbor to University of Delta, Agbor; and the Anwai Campus of Delta State University, now Dennis Osadebey University, Asaba.

“These three universities had their accreditations the same day and the University of Delta, Agbor, has admitted 2000 students in their first intake.

“The University of Science and Technology, Ozoro has admitted about 18000 persons while Denis Osadebe University, Asaba has admitted over 600 students in their respective first intakes.”

The governor further said “Our empowerment programmes have touched the lives of our youths and today, our state is the safest state in this country.

“We have trained these youths in different empowerment programmes, provided them with starter packs and monitored and mentored them; to ensure a very high level of success.

“Mr Chairman, the party in this state has done so well and our youths too, in keeping our party’s structure.

“Other parties in this state may make noise but PDP has stayed in charge and PDP will continue to stay in charge of the politics of this state,” Okowa stated.

Briefing on the projects earlier, the Commissioner for Works (Highways and Urban Roads), Mr Noel Omodon, said that they were necessitated as result of huge flood waters coming from the high plane of Okpanam to the low plane Asaba city.

He said that the storm drainage projects had resolved the perennial flooding in the twin towns of Asaba and Okpanam and pledged the continued support and loyalty of the Oshimili South people to the PDP.

‘We’re Proud Of You’ – PDP Nat. Chair To Elumelu, As Over 900 Persons Benefit From Elumelu’s Empowerment Programme