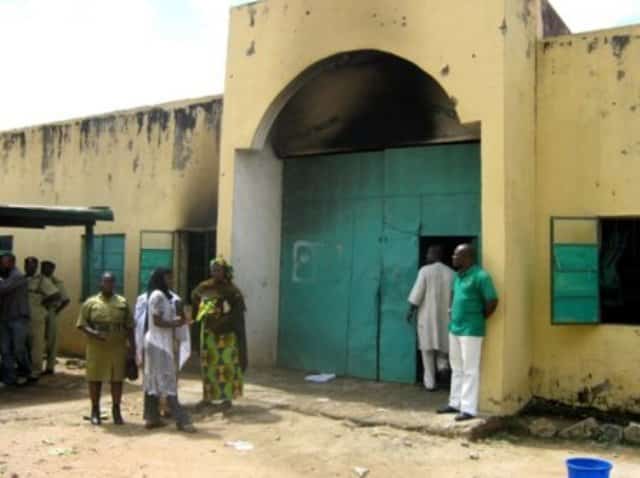 BIGPENNGR reports that 531 inmates were shortlisted for the exercise which started Monday.

Out of the 531 awaiting trials inmates who were listed under the various courts where they were undergoing trial, 38 were transferred from the Ogwashi-Uku Correctional Center to Okere prison.

It was gathered that there was no single  female inmate among the large number of male inmates who were shortlisted for the exercise which lasted till about 5:pm and expected to continue today.

Among the inmates who were listed for the Chief Judge pardon were those who were awaiting trials and had spent more than 10 years in detention.

Among inmates who were granted pardon and discharged were four named Goodluck, Destiny, Testimony and Daniel.

It was learnt that the exercise started as early as 7:30 in the morning with the Okere road condoned off to vehicular movement, particularly the side where the correctional center is located.

Prison wardens and armed police men were stationed at strategic point for the exercise which would lasted till about 5: pm when the road was opened to traffic flow.

After a long period of call, four inmates scale through the state pardon programme of the chief judge which was still ongoing as of press time.

Among them is Goodluck Sunday, a bricklayer who said he was indiscriminately arrested at Petroleum Training Institution (PTI) junction while returning from work on August 11, 2017.

Goodluck was arraigned at the High Court, Effurun and charged for conspiracy to commit armed robbery and kidnapping with suit number: EHC/116C/18.

He had spent 2 years, 7 month in the prison custody after his case had been adjourned for 12 times before he got his freedom yesterday.

An elated Goodluck said; “I went to work when the police came to arrest some people around the place. Everyone started running and I joined them to run too but was held by the police and charged to court for armed robbery”

“I want to thank Mama Justice, our able chief judge for freeing me”, he said while expressing happiness over his freedom.

Another inmate who went emotional with a copy of a Holy Bible in his hand when he was freed was the one named Testimony Imoke, aged 35. Testimony said he was arrested unjustly after someone pointed at him as the one who sold a stole phone to him.

He was arraigned and charged for conspiracy, bulgary and robbery with suit nos ME/154C/21 at the Magistrate Court III Effurun but was pardoned by the chief judge amidst jubilation after spending 1 year in the correctional facility.

Destiny Julius, 29 charged for armed robbery in suit nos: MO/97C/19 since 2018 was also discharged and acquited after spending 2 years and 4 month at the prison Okere.

Also, 29 year old Daniel Ejovi who was charged for conspiracy and arson with suit nos: CMU/38C/21 before Magistrate Court Otu-Jeremi was granted pardon after spending 4 months in jail.