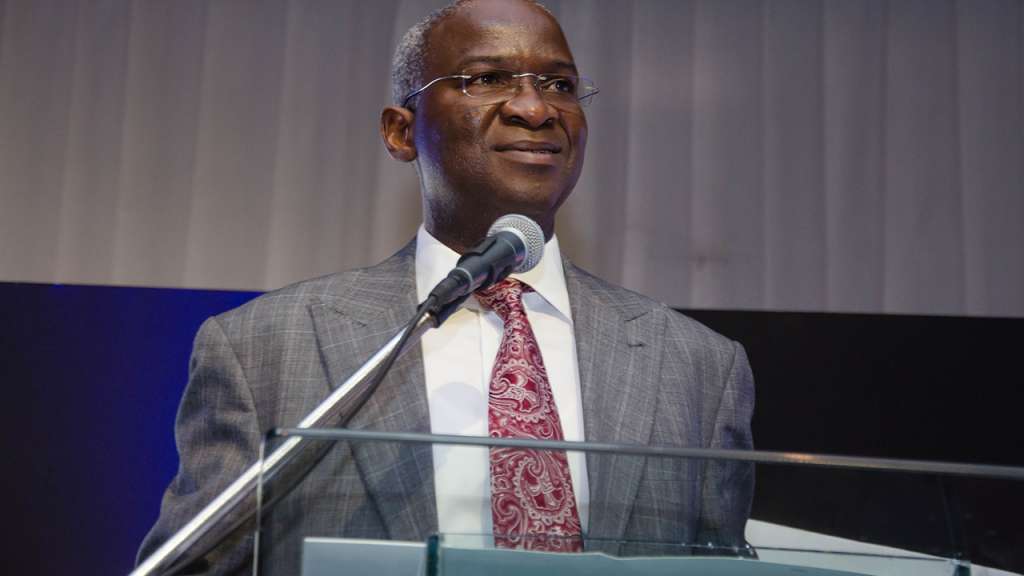 The Minister of Works and Housing, Mr Babatunde Fashola (SAN), said Sukuk was supporting 44 roads projects across the country.

Mr Fashola disclosed this on Monday at the inauguration and handing over phase I and II of Vandeikya-Ogbudu Cattle Ranch Road in Tsua, Vandiekya Local Government Area of Benue.

President Muhammadu Buhari was represented at the occasion by the Minister of Special Duties and Inter-Governmental Affairs, Sen. George Akume.

Fashola said that the completed road would impact positively to the lives of the host communities, commuters and general public.

“These projects represent major investment in road transport infrastructure, which is a commitment of the Buhari administration as a driver for economic growth and prosperity.

“They are visible and incontrovertible assets in proof of what Nigeria’s resources are invested in from a combination of our earned resources, and borrowings.

“This occasion affords another opportunity to acknowledge the impact of the Sukuk funding in the completion of Azare — Potiskum, Shuwarin — Potiskum and Sokoto-Tambuwal-Kontagora Roads.”

According to the minister, other handing over formalities that will follow the formalities in Kebbi and Vandeikya would be in: Section II, 142.2 km dualisation between Shuwarin and Azare, connecting Jigawa and Bauchi States.

In his welcome address, the Permanent Secretary, Federal Ministry of Works and Housing, Mr Babangida Hussaini, said the road was awarded to China Civil Engineering Construction Corporation (CCECC) Nigeria Limited, at the cost of N6.6 billion.

Hussani who was represented by Mr Rugba Emengo, Director Highways North Central, said the first phase of the contract was awarded in 2012 while the second phase was in 2015.

Speaking to newsmen on behalf of the contractor, CCECC, Mr George Gao, Deputy General Manager, South-South/South-East Regional Office, said the road was built according to the ministry’s approved standard.

Gao said that the contract was awarded in 2012 at the cost of N6.6 billion and its first phase was completed in 2014, adding that the total length of the road was 24 km.

He said the road built in seven years would last for more than 30 years,  adding that the road had a pedestrian way and other related facilities such as installation of signaling and safety systems.

Also, a Benue-based politician, Benard Yisa, commended President Muhammadu Buhari for completing a top class road project for them to improve the socio-economic wellbeing of the people.

Yisa a 2023 governorship aspirant in the state said as an architect, he knew that the road was a top quality project that would stand the test of time.

In her remarks, Executive Chairperson, Vandiekya LGC, Mrs Kukase Garba, commended the the president for building the road for the use of her people.

The  host of top government functionaries, top politicians amongst others graced the occasion.