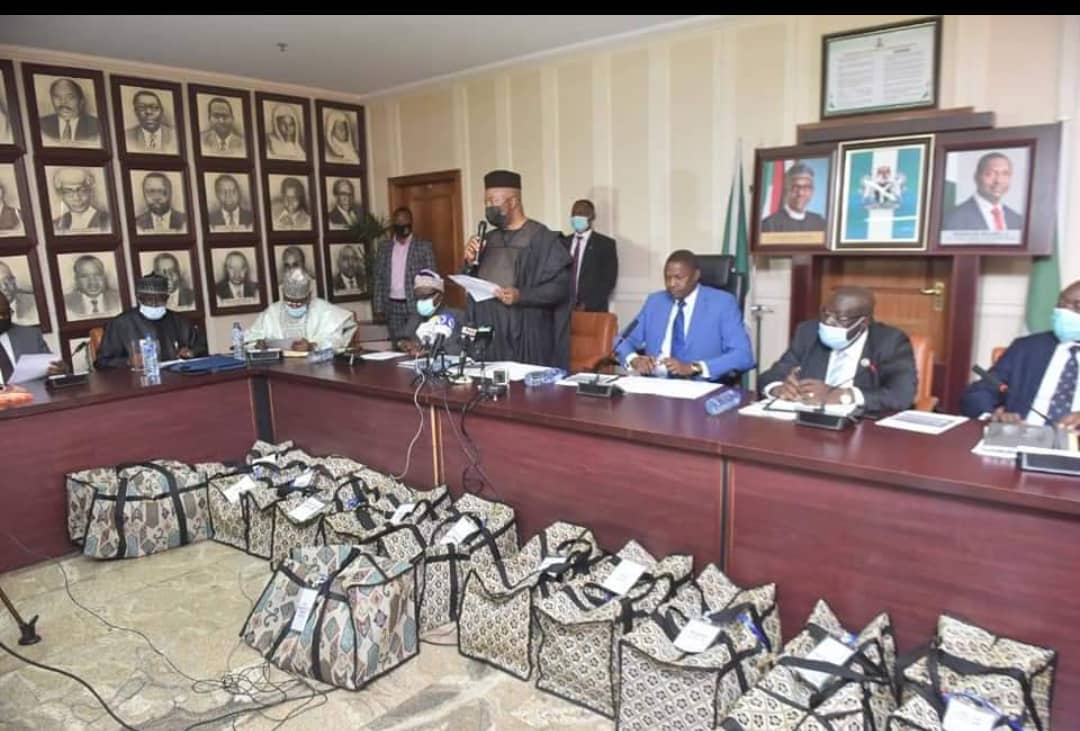 The submission of the Niger Delta Development Commission (NDDC)  forensic audit report by the Minister of Niger Delta Affairs, Senator Godswill Akpabio, to President Muhammadu Buhari yesterday is an anticipated exercise that has been greeted with excitement by well-meaning stakeholders of the Niger Delta. It has also been received with trepidation by those who have skeletons in their cupboards.

While majority of the Niger Delta people who bear the brunt of poverty, environmental pollution and underdevelopment, despite coming from the oil-rich region, are excited that the implementation of the forensic audit report would usher in a new era of development paradigm, the naysayers would want the status quo to remain so that they continue with the era of looting and contract racketeering.

The past few months have witnessed sponsored protests and threats of violence by vested interests on account of the forensic audit. Many people who had had their hands soiled in the NDDC cookie jar did not want the forensic audit to see the light of the day. To truncate the audit, they threw everything, including the kitchen sink, at the Minister of Niger Delta Affairs whose lot it was to supervise and see through the process. It must be to the credit of President Buhari’s tenacity that he did not buckle under the weight of unprecedented propaganda, orchestrated campaign of calumny and blackmail against Senator Akpabio.

The contractors who had collected huge sums of money and disappeared into thin air without as much as identifying the project sites for which they were awarded the contracts are scared stiff that the wanton pillaging of the resources of the Niger Delta people which they have perpetrated over the years will be uncovered by the forensic audit and they may be asked to make refunds or return to sites to execute the projects. For this reason it was not in their interest for the forensic audit report to be implemented. At the height of the intrigues following the proclamation of a seven-day ultimatum by ex-war lord, Chief Government Ekpemupolo aka Tompolo, Senator Akpabio embarked upon a dangerous eight-hour journey on the high sea to the creeks to explain the position of the Federal Government on the forensic audit of the NDDC to Niger Delta stakeholders. As a result of that courageous intervention, what the Niger Delta militants described as awakening the rage of the region or the resumption of hostilities against international oil companies was averted.  A Commission with the potentials of changing the development narrative of the Niger Delta region had turned into an automated teller machine (ATM) to politicians and few privileged individuals who have access to the men in power, while the ordinary people of the Niger Delta are left in squalor to gnash their teeth. In the past, many contracts awarded by the NDDC were never meant to be executed after the contractors had been mobilized with huge sums.

It is a well-known fact that NDDC had become a cash cow to many politicians in the past. It has created emergency billionaires through contract racketeering. All it took to become a billionaire was to be connected to one big man in NDDC. As recently revealed, contracts were awarded to some companies before the companies were registered by the Corporate Affairs Commission. That is why interim payment certificates of the NDDC are flying all over the country even when the contactors have not identified the project sites. The general consensus is that the NDDC has not lived up to the expectation of the people.

It was in response to the complaints by Governors from the region about the humongous sleaze that have been perpetrated in the interventionist agency over the years that made President Buhari to order the forensic auditing of the Commission from 2001 to 2019. The decision had been hailed as a courageous step by the President to redirect the Commission on a path of development.  As has been pointed out, majority of the people of the Niger Delta have however applauded President Buhari for ordering the forensic audit and they say posterity will be kind to him as one who had the development of the region at heart. The immediate past Chairman of the Board of the Commission, Senator Victor Ndoma-Egba in an interview said, “I am very much in support of the move. Certainly, the NDDC needs a forensic audit. And that need has been there for a very long time. The President has taken the right step in the right direction,” he said. It is only those who do not mean well for the Niger Delta region, who have benefited or their masters have benefitted from the looting of the agency who are against the forensic audit.

The contentious argument which has evoked so much emotion has been the setting up of the NDDC board instead of an interim administration, to oversee the forensic audit exercise. My understanding is that the setting up of the board by the President is a necessary requirement which must be carried out. Nobody can argue against that. But the problem of the Niger Delta and the NDDC has not been the absence of a board for the Commission. While the board usually serve the interest of political elites from the region, what has been the impact of the so-called boards on the development of the region? Except for the political elites, the ordinary people of the Niger Delta are not anxious for another set of board members to come in without the necessary corporate governance structure and continue the pillaging of the common patrimony of the Niger Delta people. The Commission had boards which in 24 years could not deliver a permanent headquarters building for the staff to operate from. There were boards when over 12,000 projects were abandoned across the region. However it is the interim administration of Mr Effiong Akwa which had overseen the forensic audit that was able to deliver the headquarters complex and life-touching projects to the people of the region.

Every patriotic Niger Delta person supports every move that will restore the Commission to the path of sanity before a new board will come in and begin on a clean slate. The people who have borne the brunt of underdevelopment of the region are happy for the steps that have been taken to reposition the NDDC through the forensic audit. It is their belief that the implementation of the recommendations of the forensic audit report would usher in a new era of development for the Niger Delta people. It is appalling that rather than support this noble effort some persons because of their selfish interest have constituted themselves as clogs in the wheel of progress of the Niger Delta region.