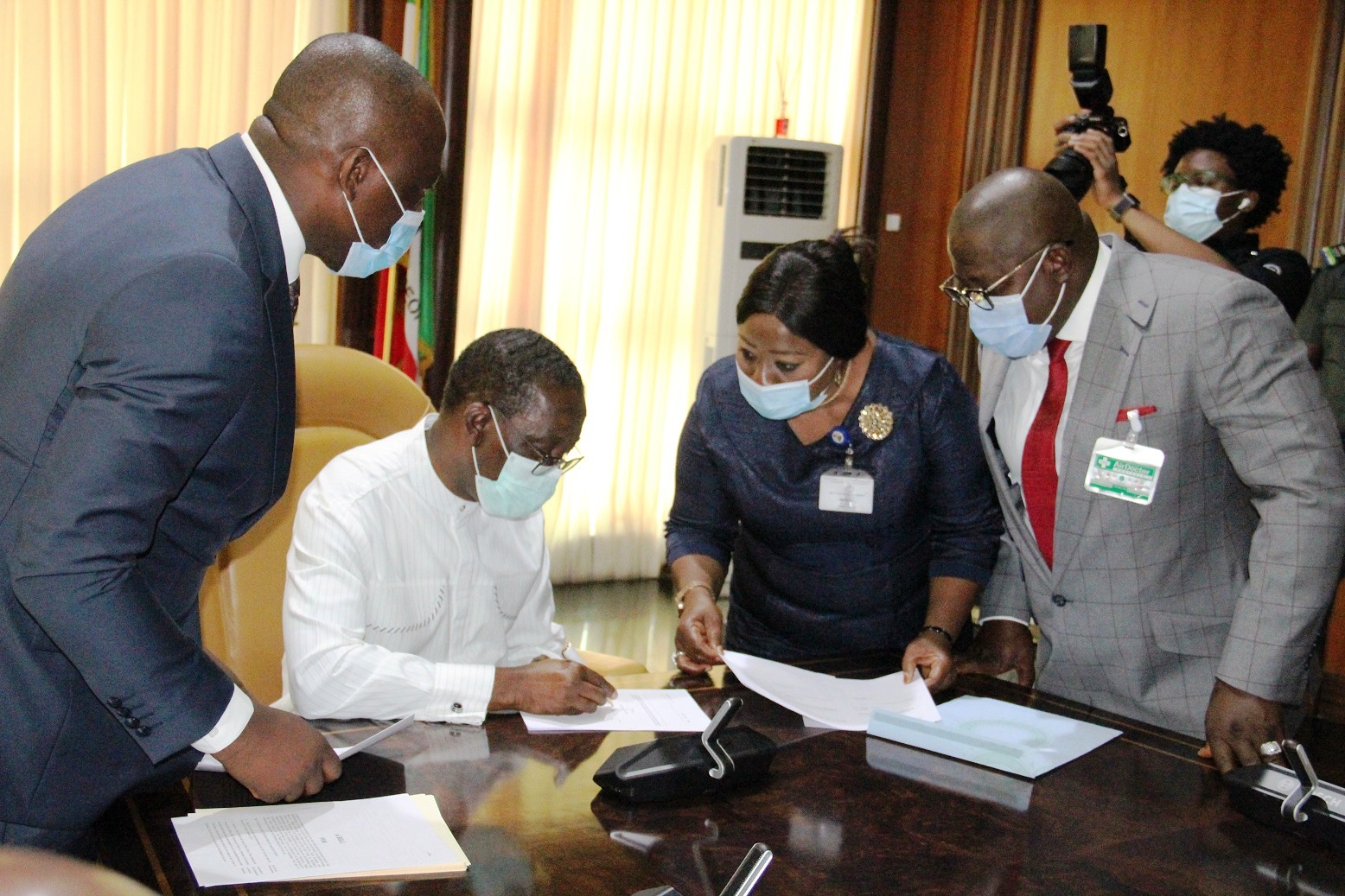 Governor Ifeanyi Okowa of Delta State, has assented to the state’s 2021 Appropriation Bill, with assurance that the state government would strive to recover from the economic challenges engendered by COVID-19 pandemic.

Okowa, who signed the bill on Monday in Asaba, commended the state’s House of Assembly for speedy passage of the Bill and said that signing the budget with a month to the end of 2020 would avail the state government the opportunity to plan further towards the implementation of the 2021 budget from January, 2021.

He thanked God for the warm working relationship between the executive and the legislature in the state, and said that the government would remain focused in implementing the budget as passed, for the benefit of all Deltans.

“You have just witnessed my signing into law the 2021 Appropriation Bill, and as I said on Oct. 27, during the presentation of the bill, we are in very difficult times this year, no doubt both in this country and globally.

“And, with the second wave of the pandemic, it will create a further challenge for the recovery of the economy of our nation.

“However, we are optimistic that in the 2021 fiscal year, things will gradually improve and we will be able to get back to the levels of infrastructural development and the human capital development for our people.

“This is very necessary because there is a lot of pain; there is a lot of unemployment and our people are generally getting restive nationally and I pray that God will help us and this nation to rediscover ourselves and to commit every work of our people and our state and nation for the common good of all our citizens.

“The budget is termed ‘budget of economic recovery’ because we are very much aware of the impact of COVID-19 pandemic, both on our health systems and the economy of the country, which is still largely dependent on the oil economy,’’ he said.

The governor explained that a lot was being done to grow the agricultural sector nationwide, including Delta’s debt profile, but stated that the programme would take time for it to begin to manifest meaningfully.

According to him, as long as we are still dependent mainly on the oil economy with the global pandemic going, we definitely have a lot of shortfall, both in the prices and the volumes of oil that is being sold in the international market.

“This obviously impacted negatively on our budget in 2020 that we had to reduce our budget downward twice in the year.

“However, I want to use this medium to appreciate our various contractors who had continued to stay in their various sites to work even when it is becoming increasingly difficult to make payments on contractual agreements already made.

The governor expressed delight that some of the key projects were still on course, including the new Secretariat building which was nearing completion and Ughelli-Asaba road dualisation, which would be completed in March, 2022.

“I want to reassure you, Mr Speaker and all Deltans that the executive will keep focus on the development of projects that we are involved in, in the development of roads, schools, health institutions and we will continue to stay on course in trying to create the enabling environment for businesses to thrive,” he said.

He disclosed that work had commenced at the Ogwashi-Uku Agro-Industrial Park, and reaffirmed that the state government was committed to delivering the project on time.

Okowa stated that the state would continue to focus on entrepreneurship programmes, and would take it to higher levels in the 2021 fiscal year by engaging more youths.

He said that the state government was also paying attention to the girl-child and the empowerment of our women.

“It is our hope and prayer that we will be able to achieve a reasonably budgeted amount of revenue, so that we can truly impact positively on all aspects of our economy, touching every community and every local government in the state.

“Deltans have done so well in praying for us and I can assure them that we shall finish all of those programmes and when we shall be leaving in 2023, Deltans and the government will have cause to say `thank God’ for all that we have achieved,” Okowa stated.

Presenting the Appropriation Bill to the governor earlier, the Speaker of the state’s House of Assembly, Chief Sheriff Oborevwori, said that the Bill went through all legislative process before passage.

Oborevwori recalled that Bill was presented to the House on 27th October, 2020 and was passed on 17 November, 2020 after it was considered sector-by-sector.

“It is with great pleasure that I present to you the 2021 Appropriation Bill passed by the House of Assembly for your assent.

“The urgency with which it was passed was informed by the legislative agenda of the House to partner with the executive to put the state on the path of recovery from the COVID-19 pandemic which has ravaged the world.

“We were mindful of the fact that the quick passage of the bill was necessitated by Your Excellency’s vision to bring the state out of the economic challenges posed by the pandemic,” he said.

The budget figure was increased to N383 billion from N378.48 billion proposed by the governor. Recurrent expenditure is N173 billion and capital expenditure, N210billion.

The speaker had explained that the increase in the budget as proposed by the governor was to provide for some Ministries, Departments and Agencies (MDAs) that were not captured in the proposal.