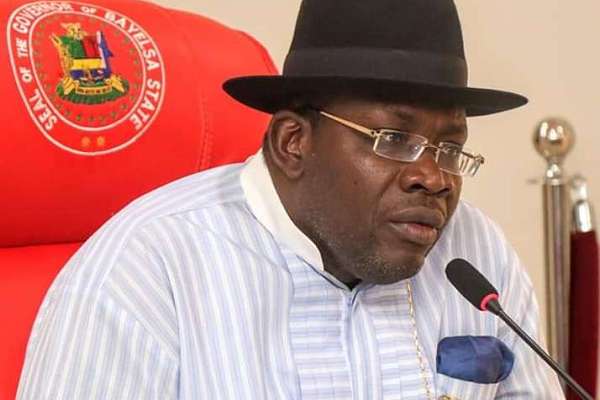 Governor of Bayelsa state, Henry Seriake Dickson, says the All Progressive Congress (APC) simply used the name and image of the former President, Dr Goodluck Jonathan to legitimize an illegitimacy during the last Saturday governorship election in the state.

The governor, who was speaking for the first time after the conduct of the election, made this remarks at a world press conference in Yenagoa, the state capital on Tuesday.

Governor Dickson described as balderdash the notion being bandied about by “APC mischief makers” that it was disagreement between him and former President Goodluck Jonathan that led to APC’s “pyrrhic victory”.

According to him, the former president remained a leader of the entire country whose image and reputation was too weighty to be dragged in the mud by the opposition party.

He explained that as a leader of the country, the former President was at liberty to receive visitors of the APC who paid him a visit.

Dickson however warned on the dangers posed by “the satanic insinuations being weaved around the visit by the APC”.

He alleged that “APC mischief Makers” had concocted the notion to “sell their diabolical plot to turn Nigeria into a one party state and a vicious attempt to legitimize illegitimate and indefensible electoral outcomes.

Dickson stressed that no politician had stood by Jonathan more than himself and that in the build up to the elections, he visited Jonathan about 16 times to meet with him on the way forward for the PDP.

“My reaction is that President Jonathan remains a leader of our country. He is at liberty to receive members of any political party. But in the context of all that is going on, I know that the insinuations are not misplaced.

“APC came to Bayelsa to take his state and people by force. With the comments they are making about him, Oshiomhole’s coming to Bayelsa to praise Jonathan, what they were doing is laying the foundation to perpetrate fraud and violence.

“No politician has stood by Jonathan more than me. They simply used his name and image to legitimize an illegitimacy. I can see the strategic content. They used Jonathan to expand the notion of disagreement and after the rigging to go to him like Pontius Pilate to wash off their hands and put it at his doorsteps to say he sanctioned it. But let us accord him the right to meet with other dignitaries,” he said.

The governor at the media briefing released video evidence of the killings and election violence that characterised last Saturday’s governorship election in Nembe local government area and other parts of the state.

Consequently, he described the election as a charade and a carefully orchestrated plan to forcefully take over the state towards entrenching a one party system.

He condemned in its entirety what he termed the brazen connivance of security agents, particularly the Nigerian Army with the APC thugs to hijack electoral materials in most local government areas.

According to the governor, soldiers were deployed in Ogbia local government area and other parts of the state led by a certain Lieutenant Colonel from the 6th Division of the Nigerian Army to cart away election materials, thereby undermining the process in favour of the APC.

He therefore called on the APC-led Federal Government to take action to safeguard the country’s democratic principles and protecting the fundamental rights of Nigerians in every election.

The governor noted with dismay the involvement of the Army in the killing of some members of the PDP, ballot snatching and hijacking of election materials by APC members and declaration of results by INEC even in areas where election did not hold.

The outgoing Bayelsa helmsman, who urged Bayelsans to be calm, said the reprehensible acts against democracy would be addressed through democratic procedures.

“This was not the first time we are having elections. People were killed, some ripped open and thrown into the river and till now no arrest. We all know that the Minister of State for Petroleum Resources, Chief Timipre Sylva, and a notorious militant, Sam Kodjo, plotted and carried out these heinous act, which actually was an assassination attempt because I was billed to visit Nembe that day for the PDP campaign.

“As democrats, we believe in using democratic procedures in challenging what happened in Ogbia. In Ogbia, there was no collation done.

“In most of the areas, at the conclusion of voting, the soldiers came and rounded up everybody and forcibly took them to Ogbia town and asked all PDP leaders to leave to enable them replace pre-written results. And so the results announced for Ogbia, like those for Southern Ijaw and Nembe, were not real.

“What has happened in Bayelsa is one of the most brazen acts of distortion and rape of our democracy.

“What took place was not a democratic election. It was a military coup.

“It was the height of conspiracy by the federal government and security agencies to subvert the democratic rights of our people for the sole purpose of foisting the APC on the people.

“It has never been like this before. In 2015, it wasn’t as bad as this. In this case, not only was the Army directed to take over our place, but to collude with the APC thugs to unleash terror on our people.”