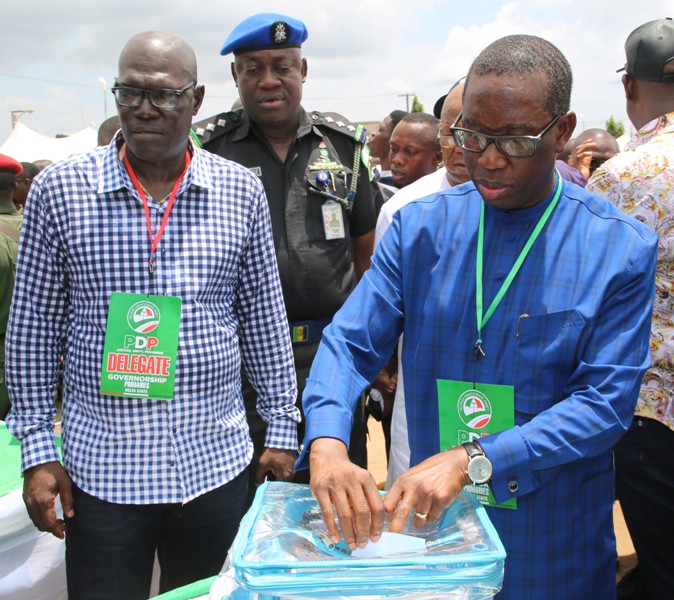 The governor after his affirmation votes promised that his second tenure would be better.

She said that out of the 3, 278 accredited delegates from different local government areas of the state, 26 invalid votes were counted, while 3, 252 votes went to Governor Okowa.

Addressing newsmen after his vote,  Okowa’s said, “During the 2015 elections you will recall that promises were made and we have continued to do the best that we can despite the very challenging times to ensure that we met with the promises but one good thing that Deltans have done is that they have continued to pray for us and partner with us in governance and I must say that I am very grateful to all Deltans particularly our leaders, our youths and our women; I thank you all for all that you have done to ensure that we have a peaceful state because without peace, we cannot develop.

Governor Okowa who at the occasion announced that his Deputy, Barr. Kingsley Otuaro will be his running mate for the second term, said “the PDP in Delta is a family and we are very proud of this family and because we realize that we are a family, PDP has insisted that there will be equitable process where there is justice and fairness; because we are one family the PDP endorsed my candidacy in 2014 and I went through by the special grace of God during the elections and we won; today in your belief for equity, justice and fairness, the party has returned me unopposed as its candidate; I am very grateful and I thank you for being a party that reasons that we can only be a family when there is equity and fairness.”

“I want to assure you that we will continue to remain strong under the leadership of our leader, Chief James Ibori; this party will remain focused, this party will be about Delta, we shall continue to ensure that we are strengthened enough to be recognized very strongly in national politics; there is no need to be afraid, there is no need to shake, when something happened in some states, people send text messages but, we have come as always in the name of God and because God is with us, there is nobody that can be against us.”

“We are strong and we will continue to remain strong, we will go forth into the elections and we will win landslide; I am proud because I have each and every one of you, our God that was with us in 2015 is with us, so there is no cause for alarm, we must go out there to talk to the people, we must go as one united family, we must go carrying everyone along and I believe that this is the principle of our party, and even when we go into the congresses on Tuesday, Wednesday and Thursday to elect candidates for the Senate, House of Representatives, and House of Assembly, let us go through these elections with brotherly and sisterly love, let us conduct it in peace,” he admonished.

Governor Okowa who was elated at the peaceful conduct of the primary elections emphasized, “I have spoken with our party chairman and I know that there will be a free and fair primaries and the results will also be free and fair and by the grace of God, I appeal to each and every one of us even when you lose in the ballot you have not lost everything because you belong to one united family.”

Former Governor of the state, Chief James Ibori who addressed the delegates before the commencement of voting charged Deltans to que behind okowa in the 2019 polls.

Former Deputy Governor Benjamin Elue, Senator Stella Omu, PDP Chairman in the state, Barr. Kingsley Esiso among others who spoke at the event, expressed confidence that the PDP will emerge victorious in the 2019 general elections as the state remains the stronghold of the party.