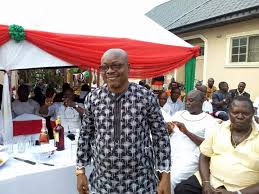 Ogwah stated this following Anioma’s celebration of Delta State Governor, Sen Okowa over the weekend, saying that the celebration is a core recognition of excellence and proven mettle.

The Assembly hopeful, said that the celebration speaks volume of a people who appreciates not just their own but the fact that Delta State has indeed fared well under Senator Ifeanyi Okowa.

According to him, Okowa’s dexterity in piloting the affairs of the state at a time when the country’s economy and polity are most unstable tell of a man who knows his onions in leadership and management.

He described the Governor, Okowa as most suitable for the job and therefore called on Deltans to appreciate him through their support for his government.

The Assembly Hopeful, posited that the governor has successfully converted the state to a construction site and has littered the state with viable projects cutting across road networks and human capital development.

Hon. Ogwah noted that across constituencies and communities in the state, Okowa’s administration had embarked on one or more development projects, stressing that it takes a seasoned administrator and focus leader to attain what the governor had achieved in less than three years.

Ogwah commended the organisers of the programme, describing them as true observers and advocates of the leadership excellence so display by Okowa in Delta State.

He explained that the grand reception has afforded the people, yet another opportunity to reaffirm the high confidence reposed on Okowa, stressing that the move will spur the governor on to remain a great ambassador of not just Anioma nation,  but of the state in general.