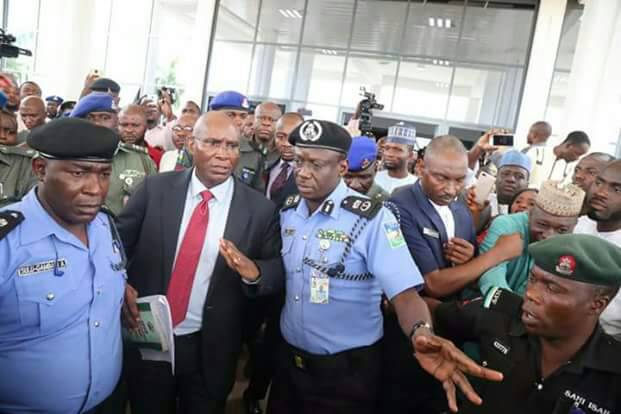 A high court sitting in Abuja has granted Ovie Omo-Agege, senator representing Delta central, an interim order restraining the police, Department of Sate Service (DSS) and other law enforcement bodies from arresting him.

Omo-Agege had on Wednesday, allegedly stormed the senate with unidentified persons who made away with the mace.

The act caused chaos in the red chamber for a while, until a spare mace was brought in to enable the lawmakers reconvene plenary.

Omo-Agege later joined his colleagues in plenary but was subsequently led away by the police.

Thecable report however that Omo-Agege’s lawyers approached the court on Thursday to seek an interim injunction against arrest or detention of the senator.

The team of lawyers led by Aliyu Umar, a senior advocate of Nigeria (SAN) asked the court to restrain the respondents, listed to include attorney-general of the federation (AGF), inspector-general of police (IGP), commissioner of police FCT command and the director-general of the state security service (SSS), from attempting to threaten or violate the fundamental human rights of the applicant.

Ishaq Bello, the presiding judge, granted all the four prayers.

He reassigned the case to court 30 for hearing of motion on notice and adjourned till May 6.

I’ve Capacity, Experience And Contacts To Do The Needful In The Senate – Uduaghan