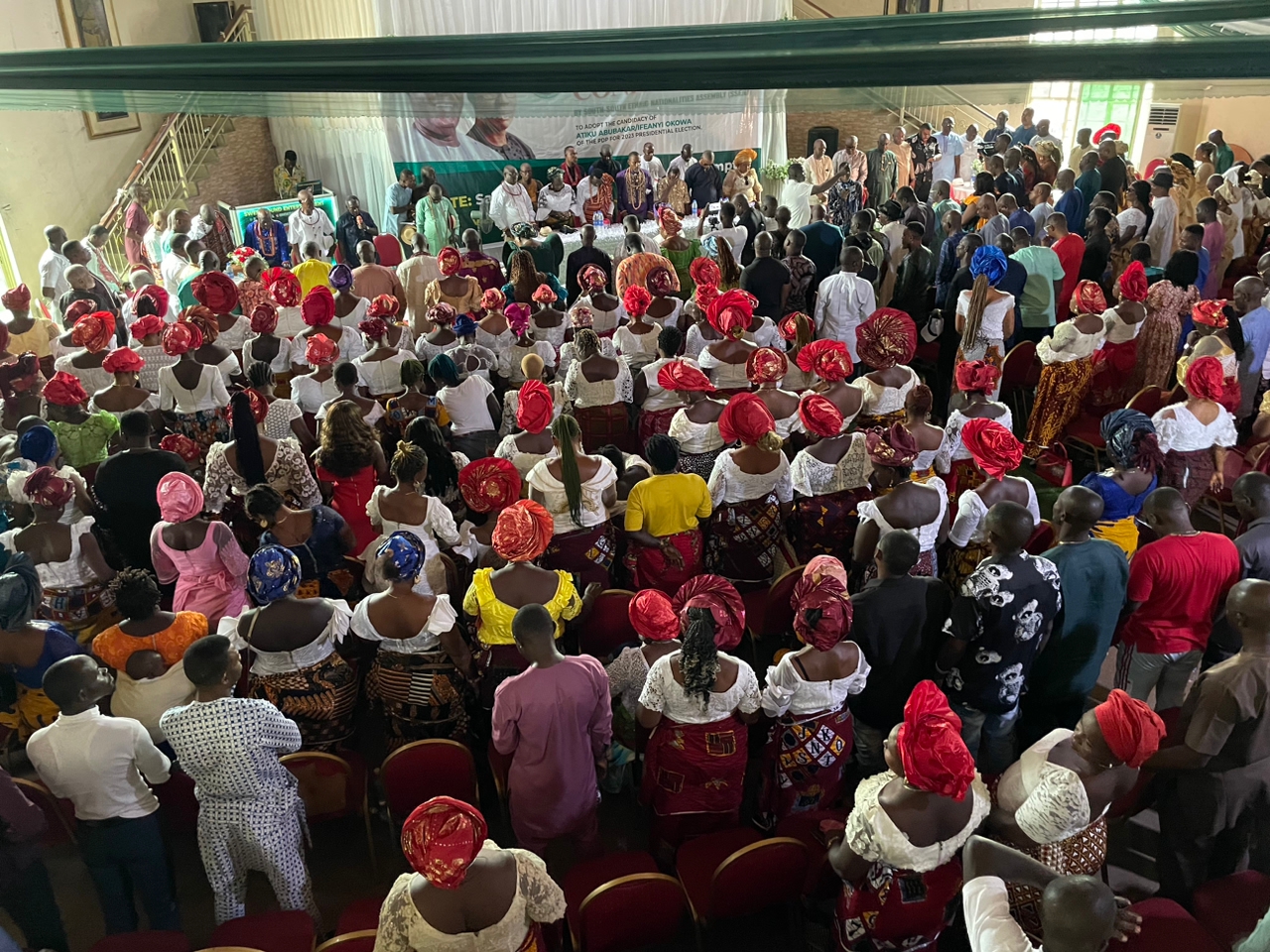 The South-South Ethnic Nationalities Assembly (SSENA), on Saturday, threw their weight behind Atiku-Okowa presidential ticket to rescue Nigeria for maladministration of the APC led government.

The group’s endorsement was announced at a press conference held at BB hotel in Warri, Delta State.

National Coordinator of the group which  comprises of various regional groups, community leaders, activists, traditional titleholders, stakeholders, religious leaders, among others, Chief Favour O. Izoukumor, said that PDP administration considered the South-south region in the equation of Nigeria politics, than the Buhari-led APC.

Izoukumor said that Atiku-Okowa presidency would guarantee Nigerians restructuring and resource control which has been the yearning of the South-South region.

He said that the decision to adopt Atiku-Okowa came after critical appraisal of the political parties, candidates, their manifestos, antecedents, leadership, and track records, as it affects the growth and development of the region over the past 62 years since independence.

“We looked at some of the defunct regional political parties viz. NCNC and NPC, led by Nnamdi Azikiwe, Sir Abubakar Tafawa Balewa and Alhaji Ahmadu Bello respectively, whose programs, economic and administrative policies favoured the minorities of Edo and Delta provinces (Defunct Midwest region and later Bendel State) and by extension the whole Niger Delta region.

“We recall that the first Prime Minister of Nigeria, Sir, Abubakar Tafawa Balewa, saw to the creation of the Mid-West region, and subsequently the mid-West state, despite the resentment of some members of the political class during that time.

To buttress his point, Izoukumor said that under the 4th Republic, the Federal Government under the People’s Democratic Party (PDP) led by President Olusegun Obasanjo a former military Head of State, through to President Umaru Musa Yar’Adua and Goodluck Ebele Azikiwe Jonathan, provided extensive support to the South-South geo-political zone.

“These institutions and their policies were geared toward the development of our region. It is fair to say that the current peace and tranquillity in the Niger Delta is the product of the then-PDP-led Federal Government.

“With the glaring performance of the then-PDP-led government, Nigeria regained its rightful place in the comity of nations as a leader of the African continent. The Universal Basic Education Programme (UBE) was established. PDP brought about astronomical growth of the Nigerian economy, with a 100% GDP growth from 3% to 6%; resuscitation of the National Fertiliser companies in Kaduna and Onne (Rivers) as well as grew the excess crude oil account from a paltry sum of $2bn to $43bn, while managing to forge an $18bn debt relief deal with major creditor nations and groups, including the Paris Club.

“Worthy of note is how the PDP considered the South-south region in the equation of Nigeria politics, by making a minority ethnic nationality, Dr. Goodluck Ebele Jonathan, a Vice-President and subsequently President of Nigeria. It was the highest political office attained by a minority from the South-South, and went ahead to make him the President of the Federal Republic of Nigeria. Under Jonathan’s formidable economic team, Nigeria’s economy was rebased for the first time in a decade, leading to the country’s emergence as the largest economy in the continent, after overtaking South Africa.

Izoukumor, expressed delight over Atiku choice of Governor Ifeanyi Okowa as his running mate, saying that his choice was the best for the South-South.

“We are now in 2023 and the PDP has again demonstrated its ‘organicness’ and love for minority groups by picking Senator (Dr) Ifeanyi Okowa from Delta State as the Vice-Presidential candidate.

“Okowa symbolizes a bridge between the South-South and South-East. His adoption by the party was borne out of his sterling performance as a governor of Delta State. His giant strides are evident across the land and are visible to the blind and audible to the deaf. His landmark achievements in Delta State are evident, particularly in riverine communities, where his carefully thought-out programs and policies have created wealth for Deltans.

“The PDP is known for talent hunting, and they have done it again by picking Okowa in this coming election. Presently we believe this is the best for the South-South. There is no major political party other than the PDP and its candidate, Atiku Abubakar, have shown interest in the S/S and the Nigerian people, and with his charisma and willpower to pull Nigeria out of the quagmire of hopelessness and to rescue it for a better and greater nation.

“The PDP government initiated the fight against corruption through the establishment of anti-corruption agencies such as the EFCC and the ICPC. Under the PDP, Nigeria witnessed private-sector reforms in telecommunications, banking, and pension administration.  It was the PDP-led government that paid off the foreign debts inherited by the civilian government.

“The chronicles of PDP achievements over those years cannot be written without His Excellency Atiku Abubakar getting a prominent mention, both for his tireless effort as a backbone of the reforms and as chairman of the National Economic Council (NEC).

“In addition, Atiku Abubakar’s wealth of experience in both the private and public sectors gives him an edge over all rival candidates in the 2023 elections. He has created thousands of direct and indirect jobs for Nigerians in his home state of Adamawa and other parts of the country. Atiku has already pledged a whopping sum of $10 billion to small and medium-sized businesses to create jobs that will solve the unemployment crisis we face, if elected president.

“H. E Atiku again, promised to restructure Nigeria if elected president. We must recall that the critical demands of the people of the Niger Delta over the decades of marginalization have been restructuring and resource control, as were the cases during both CONFABs convened by former Presidents Obasanjo and Jonathan.

“One of the demands of the people of the Niger Delta presented to the Nigerian government was to restructure Nigeria, so that the people of the Niger Delta would benefit from their God-given natural resources. We are aware that of all the candidates and political parties, only PDP’s Atiku has categorically promised Nigerians restructuring and resource control. We believe that this will bring peace and transform the Nigerian economy, as it would galvanize all regions to explore their options and available resources for their growth and better lives for their citizens.