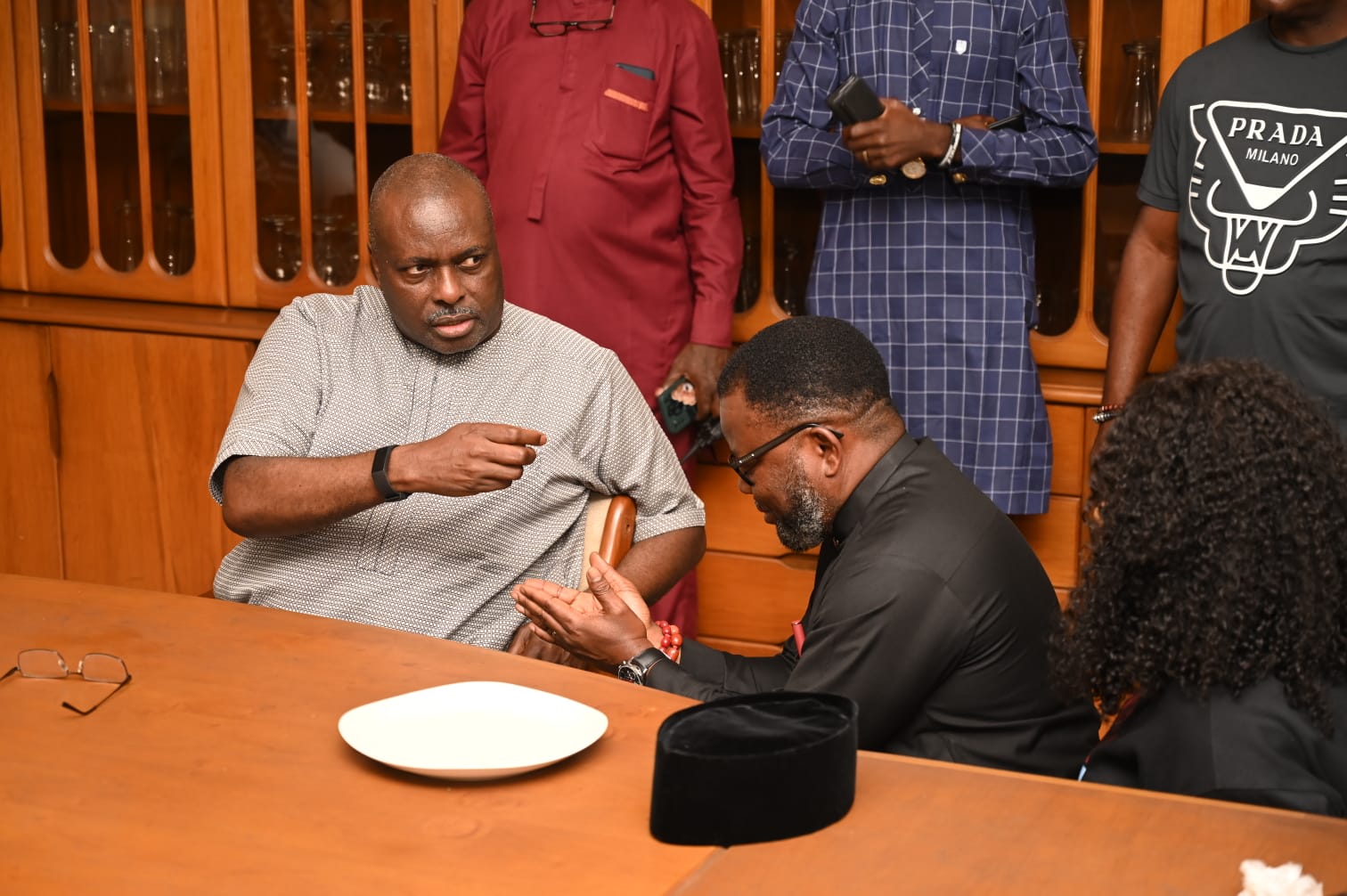 The governorship candidate of Young Progressive Party (YPP) in Delta State, Comrade (Chief) Sunny Ofehe, has revealed what he discussed with former Governor of Delta State, Chief James Onanefe Ibori when he visited him at Oghara, his ancestral country home on Wednesday.

It was gathered that Ofehe held a closed door meeting with Ibori who commands a lot of respect in the politics of Delta State.

Ibori, though a chieftain of the PDP is expected to play a big role in rallying major stakeholders and gladiators as a statesman towards who emerged as the next governor of the state in 2023.

Dependable sources privy to the development had said that the meeting was a consultative visit and that Ibori is father to all.

According to Ofehe, while addressing Ibori, he urged him to use his contact to ensure a level playing field for all the governorship candidates to showcase themselves and what they have to offer Delta State in the build up to the March 11 governorship election in the state.

He said that when elected as governor, he would harness the commercial opportunities in the Ethiope River which is the deepest River in Africa and turn it into a tourists attraction centre for local and international visitors lamenting ‘today Ethiope River is not even being utilise’.

According to the YPP guber candidate, Delta state government was under utilizing the potentials that the state possessed in terms of human and natural resources, expressing displeasure that as the largest producer of crude oil, Delta state supposed to compete with Rotterdam in marine business and become the maritime hub of the country.

His words; There is no place in the world where I have seen four sea port within the radius of a 110km from each other and yet the state is not benefiting from it. We have what it take to compete with Rotterdam and even become the global hub of maritime activities. We have 165.12km of coastline and we are not dealing with the fishes and other marine possibilities that are there yet. I was in Gbaramatum Kingdom, we went through a lot of oil wells, flow stations, manifolds yet the citizens of that place don’t have the basic water yet we are the largest producer of crude oil in this country. Because we are the largest producer of crude oil, Nigeria today is the eight largest exporter of crude oil.

“When we were coming I told my people in the car that the Ethiope River is the deepest single inland waterways in the whole of Africa. It is sad that we are not taking advantage of this commercial opportunities that’s open to us in this part of the whole.

He said that Delta state has same typography like Rotterdam which has the highest concentration of tank farms in the world yet do not produce crude oil and with the most bushest port in the world, saying that with the right leadership the four seaports in the state can been revamp and put to proper use through FDI.

He said that the oil multinationals who came to the country in 1958 after Shell, Chevron, Mobil, Exxon and Agip promised to transform the oil bearing states to become the Rome, Paris, Amsterdam and New York but ‘60 years down the lane what we have is increased poverty, increased environmental degradation and these are sad reality’.

Ofehe said that he decided to join the race with the passion he has to cause positive change in the state after ‘all the possibilities I tried to bring in through people that I know in government, either fell on deaf ears or they do not understand where we are coming from; saying ‘I just feel that it is time for me to use the knowledge that I have acquired in my 27 years, the experience that I have acquired and the exposure to come and serve through the ballot in the 2023 election.

Describing his relationship with Ibori as that of ‘father and son’, Ofehe said that his visit was not to plea with Ibori to endorse him or adopt him as his candidate but to urged him to play the elder statesman role by giving equal support for all candidates in the race.

‘I’m not here to plea with my leader that you should cast your vote for me, I am not here to say I have to be your candidate because I clearly understand you have a political party of your own. The beauty of democracy is that it offer us as a people the platform for everybody to come and show before the electorates what they have and intend to do in the next four years after the election. When I called my leader and daddy on phone because he truly deserve it when I called him my daddy.

He said that Ibori’s name is synonymous with Delta politics ‘even in international meetings when I tell people outside of this country that I am a Governorship candidate even to some of the white men who understand Nigeria every well, they keep asking me have you met Chief Ibori?.

He reminiscent how he met Obasanjo in Dublin in 2019 and he asked him to see the former governor as one of key stakeholders that controls the political situations in the state.

‘The last time I came here in 2018/19 when I met former president, Chief Olusegun Obasanjo in Dublin after praying for me, he hold me and say whether people like him or not there is one man you have to meet, then he mentioned my daddy, Chief Ibori. That’s was 2019. Today I am here again and first of all I want to thank you for giving me this rare privilege to see you because some people would even want to play politics with my request to see you but you didn’t do that because you know I am your son and you allowed me to come and it is a further proof that you’re not just a political leader for your party alone but a political leader to all of us.

‘You served this state for eight years and I know many people who have told me how you transformed their lives from being nothing to something. So I told myself the last photograph I took with you I put them in my small wall of Fame that’s in my living room. When I was about coming to Nigeria I took my wife and show her your picture and say this man you see here I must see my daddy when I come to Nigeria. I can’t start this race even though I have started without seeing you.

‘So whatever that will happen in 11th of March, whoever becomes the governor of this state own it to you to take you along in the implementations of the manifesto he has for this state.

He lamented before the former governor that if Delta state was a company in its current economy state, it would have been bankrupt by now and urged him not to relent in joining force to salvage the state by installing a man with verse contact, potentials and international exposure to withstand the recession that may come in the future.

He said that the red flag tagged on Nigeria by western countries has grossly affected the nation’s economy and scared potential investors away, blaming the development on Nigeria government’s failure to engage diplomatically with the international community.

His words; ‘I want to sound this note of warning and it’s clear for all of us that our state if it were to be a company it could have be bankrupt by now. We do not have money. Our country is also ‘broke’. Everytime I come into this country I come with White people and the reason I come with White people is my little contribution to rebranding of this country to make them see the humanitarian spirit that we Nigerians have so that that can disabuse their mind from what their embassies have done to us by naming and shaming us in their website, whether you believe it or not the western countries say Nigeria is the most unsafe country in the world after Iran, meaning Afghanistan is even safer than us and it is a shame but I don’t blame them, I blame our leadership’.

Ofehe told Ibori that when elected as governor, he has the capacity to attract $26 billion foreign direct investment to revamp the economy of the state and create jobs, wealth for her people.

He said that he will guarantee 1 million citizens of the state a minimal of N10,000 social benefits which he said he has practically under studied and modern after the Netherlands Social Benefits Programme, saying that senior citizens, our physically challenge people, our mothers will be targeted so that it can help alleviate their suffering.

‘I have said it many times and I want to repeat it here before my daddy (Your Excellency) that our state supposed to be California of Sub-sahara Africa. In terms of GDP we are supposed to be richest than countries like Ghana, Sierra Leone, Togo etc. We’re not supposed to be where we are. We’re a state with the highest number of tertiary institutions in this country and that means we have intellectually sound young people and God has been bringing to our traditional throne young vibrant intellectual Kings that can work with us at the executive level to position Delta state where Delta state truly deserved’.

Describing Ibori as a global brand who has put the state in world map as executive governor in his time, Ofehe urged the former governor to do all he can to ensure leaders put their personal interest behind and uphold the collective interest of the state in the forthcoming election.

‘I’m here to request for your prayer. Like I say before, your name has become a household name not only for people in Delta state but also globally. Wherever Delta state is mentioned the first name that is mentioned that comes from Delta state is Chief James Ibori. I told my friends that it come to a point where I personally believe that the only thing that can compete with your name as far as this state is concern is not even a human being but Coke-Cola. So I have embarked on this journey to become the governor of this state and I believed that I cannot be in this race without coming to see my leader and daddy.

‘So March 11th, inspite of what happened we need to do all we can to steer this state. We’re a state with abundance, whatever we’re asking God to do for us He has given to us already. What we should be asking him in this next election is that it shouldn’t be business as usual. It shouldn’t be of personal interest. We should place the interest of our state before our personal ambition. Our state cannot afford to be where it is today.

Ibori, elated with Ofehe eloquency has to throw more questions at him and asked him to speak on the healthcare sector in the state after early beckoning on the Chief Medical Director of Delta University Teaching Hospital, Oghara, Dr Onome whom he also invited among others to witness Ofehe’s visit to talked about the challenges being faced by the teaching hospital in Oghara.

BIGPEN NIGERIA reports that Ibori’s body language indicates that he actually yearn for political paradigm shift in the governance of the state.