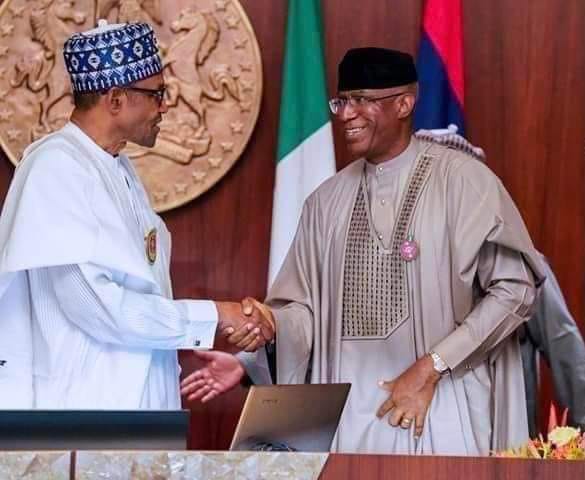 President Muhammadu Buhari has awarded the national honour of the Commander of the Order of the Federal Republic (CFR) on the Deputy President of the Senate and Delta APC Gubernatorial Candidate, Senator Ovie Omo-Agege.

According to the letter conveying the national award to Senator Omo-Agege, the President approved the honour to him in the exercise of his power as enshrined in the National Honours Act No 5 of 1964.

The conferment notice was signed by the Minister of Special Duties and Inter-Governmental Affairs, Sen. George Akume.

The CFR award, according to the letter, will be formally conferred on Omo-Agege at a ceremony scheduled for Tuesday, October 11, 2022, at the International Conference Centre, Abuja.

Yomi Odunuga, Special Adviser, Media and Publicity, to the Deputy President of the Senate, in a statement on Friday, said that the national honour was for Omo-Agege’s immense contribution to lawmaking, oversight and quality representation.

The federal lawmaker has also attracted numerous projects to his senatorial district. These include the establishment of Nigeria Defence Space School; Nigerian Law School Campus; establishment and construction of Oil and Gas Industrial Park, Sanubi (with an independent power plant to power Orogun, Eku, Abraka etc. with 24/7 uninterrupted power supply); construction of NDPHC/NIPPS Injection Substation and a host of others.