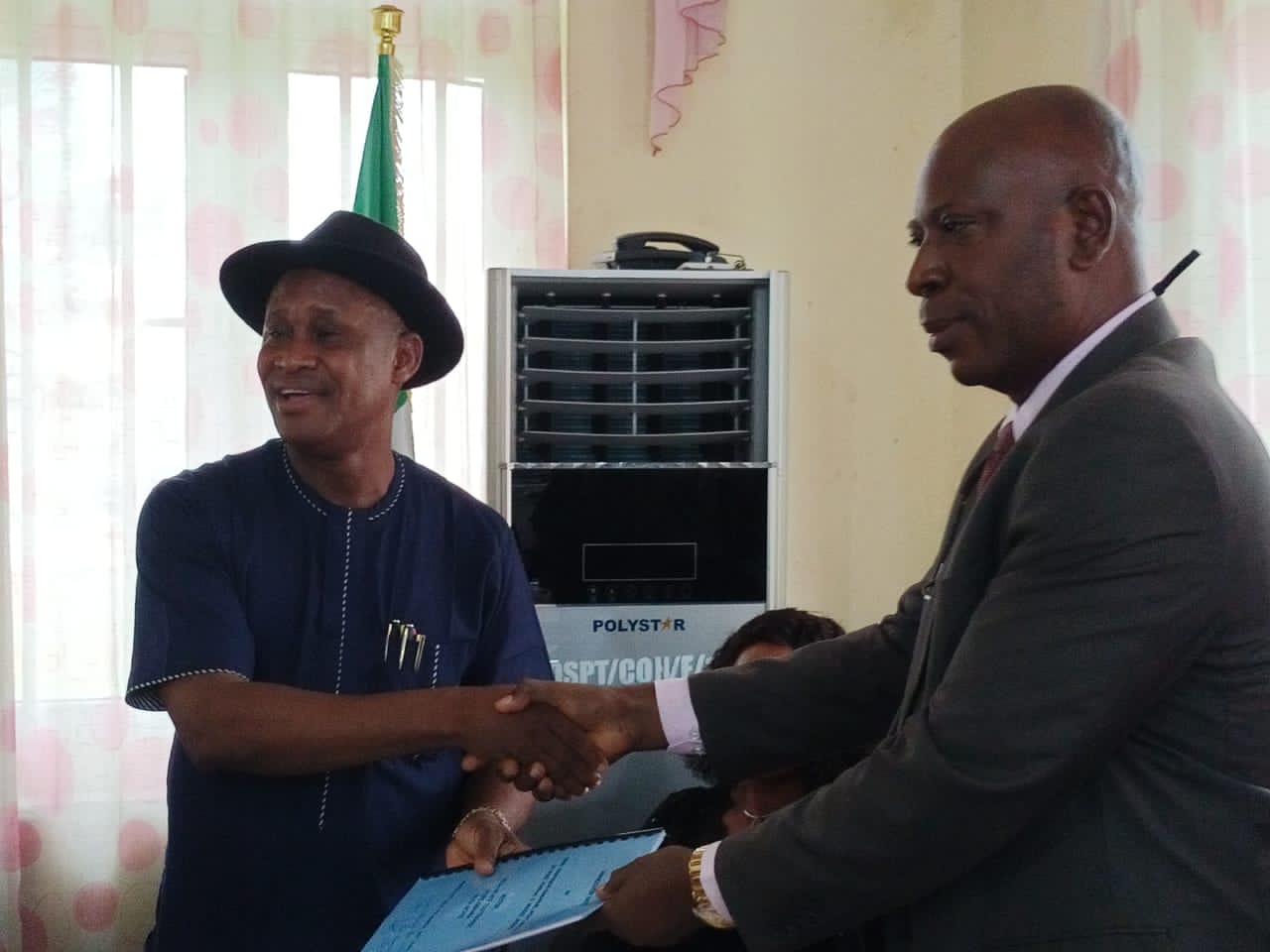 BIGPENNGR reports that Prof. Ufuophu-Biri took over the mantle of leadership at the polytechnic after the outgoing Rector, Prof Emmanuel Apoyi-Ogujor, officially handed over to him on Monday in a well packaged ceremony.

Untill his appointment, Prof Ufuophu-Biri was the Director, Pre-Degree Programme of the Delta State University (DELSU), Abraka. He was the former Head of Department, Mass Communication and the Associate Dean of Students’ Affairs of the same University.

In a handover/sendforth and welcoming ceremony held as the institution’s on Monday, Prof Apoyi-Ogujor assessed his performance after five years in the saddle and resolved that he is leaving the institution better than he met it.

Speaking at the separate ceremonies, Prof. Apoyi-Ogujor reflected on his journey administrating over 12,000 students, over 500 staff and 300 ad-hoc staff, attributing his successes to God and the huge support he got from both academic, non academic, the students and other critical stakeholders including the polytechnic community.

The outgoing rector thanked everyone who made his tenure a success, particularly the state governor, Dr Ifeanyi Okowa who gave him opportunity to serve, adding that the sacrifices of all stakeholders contributed to the feat achieved by the institution during his tenure.

Some of his achievements were the ranking of the institution as number seven in the country, overall best in Delta State, establishment of a water factory, ultramodern auditorium and establishment of an FM station for mass communication department among others.

He said: ‘I want to thank His Excellency, the Governor, Dr Ifeanyi Okowa for giving me the opportunity to serve. I didn’t know him any day and I never went to Asaba to appeal for fund throughout my tenure. We always get what is due us so I want to appreciate him profusely.

‘I want to specially thank the former governor, Chief James Ibori for being a father to the polytechnic.

He, however, urged the incoming rector to give priority attention to the institution, urging him to carry everyone along in the task of piloting the affairs of the state-owned polytechnic.

In his acceptance speech, Prof. Emmanuel Ufuophu-Biri, commended the former Rector for the legacy left behind in the institution, assuring him that he would build on his achievements.

Prof Ufuophu-Biri, however expressed gratitude to the governor for the opportunity given him to serve, saying that he wouldn’t disappoint all who reposed confidence on him.

‘I have accepted the presentation by the Rector wholeheartedly. If someone had told me that I would today not being talking as an MC but as a Rector I wouldn’t have believe it.

‘So therefore, I want to sincerely thank his excellency, Dr Ifeanyi Okowa who gave me this opportunity and I want to also thank him most specially for the established three universities designed to caretaker for the needs of Deltans. It was a well thought out idea and I want to commend him for it.

‘I will try and keep to my mission and vision with what I met here at the polytechnic. We will make good imprint not only on the sand of time but on the stones of times.

‘We will establish America space in this polytechnic. We will establish an American-Nigerian scheme here that will expose our students and staff to the outside world. Some of my contacts abroad where I am an Alumnus and other stakeholders have called to say they are ready to come over to help us turn things around here. We will establish a lecturer/students welfare scheme. We will ensure cooperate social responsibility for the community and students.

‘I want to thank the former Rector. You are leaving a big shoe for me and I prayed that my leg fit in properly to the shoe you’re leaving behind’.

Ufuophu-Biri said that he would ensure that the institution is reposition to attain an enviable height during his tenure, soliciting an unflinching cooperation of all stakeholders to achieve his vision for the institution.

He urged the students to be diligent, hardworking in their academic pursue and be law abiding so that none of them is expel or rusticated for vices inimical to the institution’s goals.

Various speakers at the event including the chairman of Polytechnic Governing Council, Barrister Andrew Orugbo, the former chairman of the council, Chief Andy Asawota, Chief Duncan Ewhere who represented former governor Chief James Ibori among others eulogized the former Rector on his laudable achievements and urged his successor to take the institution to a higher level.

2023 Presidency: Jonathan Is “Technically Out Of The PDP”, Says Former Minister