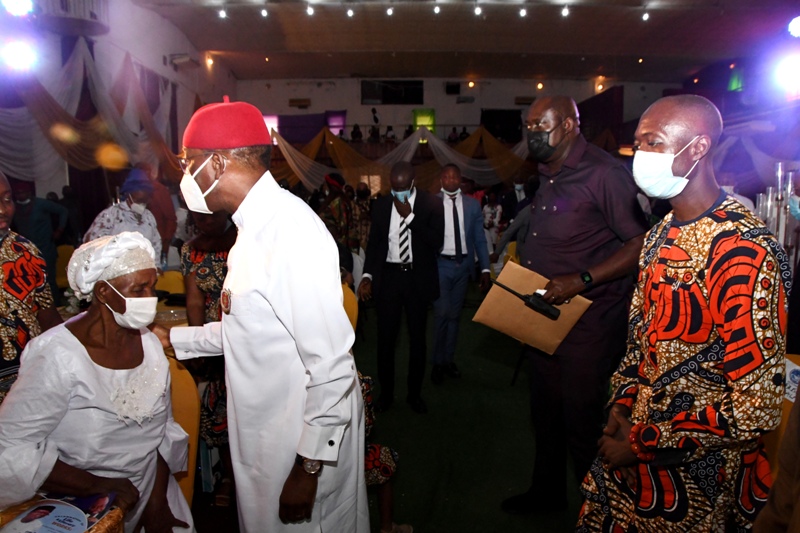 Governor Ifeanyi Okowa, on Monday, paid glowing tributes to Prof. Samuel Ukala who died on September 13, this year at the age of 73, describing him as as special gift to Delta State and Nigeria.

The governor who was speaking at a one-day ceremony held in Asaba to celebrate the life and literary works of Prof. Ukala said the renowned playwright and Professor of Theatre Arts was a rare gem.

He disclosed that the deceased has immortalised himself with his unique literary works and the impacts he made in the lives of people, coupled with the fact that he was an asset to Delta State, Nigeria, Africa and the world at large.

The Governor said he was emotionally pained by the demise of Prof. Ukala because of how dear the erudite scholar was to his family.

According to the governor, Prof. Ukala was many things to different persons, saying that he (Ukala) was a father figure as well as a friend to him.

He noted that the late Ukala, apart from serving as member of the State Advisory and Peace Building Committee, was also, a member of the Project Implementation Committee for the establishment of the three new universities in the state.

While saying that, it was rather unfortunate that he did not leave to see the first set of students of the new universities, Okowa noted that the late Emeritus professor lived his life fighting for others and not self because he believed in equity, justice and fairness.

“Prof. Ukala lived his life fighting for others and not self because he believed in equity, justice and fairness.

“I wish that people would emulate these sterling qualities of his so that the society would be a better place for all.

“The late professor, had by his literary works, immortalized his name, as those works of his would live forever long after we are all gone,” Okowa said.

Earlier in his remarks, the Chairman of the occasion, Prof. Sam Oyovbaire who was represented by Revd. Prof. Oke Akokotu, said the exit of Prof. Ukala created a vacuum in the literary world and the Advisory Council of the State where he was a member till death.

On his part, the Chairman of the three new Universities Management Council, Prof. Emmanuel Nwanze said the deceased professor was outstanding in all assignments given to him, pointing out that working with him was an experience he will forever miss.

Other speakers at the event had testimonies to share about the legacies of late Ukala, Professor Emeritus.

A drama on ‘Iredi War’ written by the late professor was acted live at the event which featured fund raising for a foundation to immortalise him (Prof. Ukala).