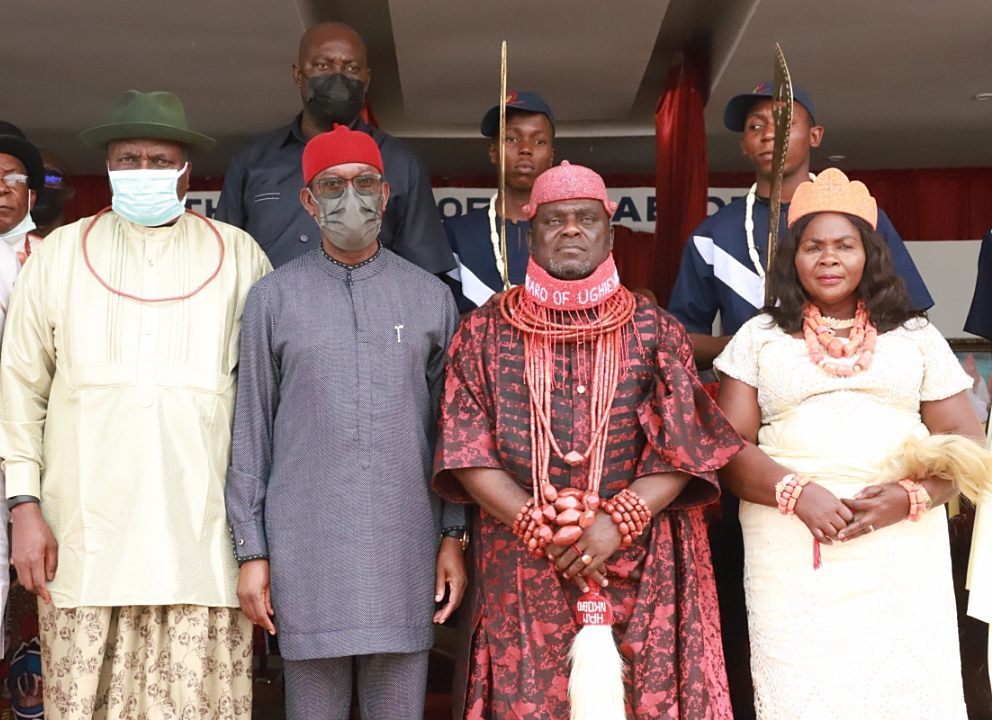 Delta Governor, Sen. (Dr) Ifeanyi Okowa, on Saturday, applauded traditional rulers in the state for their individual and collective roles in consolidating and supporting his administration’s peace programmes.

Okowa gave the commendation during the 10th coronation anniversary of the Okobaro of Ughievwen Kingdom, HRM (Dr.) Matthew Ediri Egbi, Owahwa ll at his palace in Otu-Jeremi, Ughelli South Local Government Area of the state.

He noted that royal fathers in the state have been playing unique roles in promoting peace and unity in their respective kingdoms, adding that they should sustain their peace effort so as to consolidate the tempo of development in the state.

The Governor, also commended royal fathers who were at the ceremony in solidarity with their Ughievwen counterpart, pointing out that such solidarity was needed across the divide.

According to him, when our royal fathers from across the divide, (North, South and Central) work together, then we can ensure greater peace in our state and that is the role that they have continuously played.

“I want to thank all our royal majesties for the roles they have played in consolidating and supporting our peace programmes in the state.

“When our royal fathers from across the divide, (North, South and Central work together), then we can ensure greater peace in our state and that is the role you have continuously played,” he said.

“I am glad that l am able to be here today. The reason is that you have been a very wonderful king and worthy of our support.

“Your Royal Majesty, l did listened to your speech and l am particularly very glad that you have decided with your kingdom, to embark on a tree crop development.

“Because l believe that for kingdoms that have quite a lot of land to spare, tree crop development is very key and it will help to boost the economy of the people. So l thank you for that programme,” he added.

On scholarship scheme for gifted persons, the governor said his administration has continued to ensure that bursaries were paid to students of the state origin in tertiary institutions of learning across the country.

He disclosed that his administration would take into consideration, the issue of special scholarship for a few children who are truly gifted.

“I think the Bursary Department has already raised a memo towards that and we are going to study it and l believe that the state is going to look favourably towards that.

“But l want to urge various communities to continue to see the best they can do to support their children who cannot be supported by their parents.

“A lot of communities are already engaging on such programmes. We want to encourage all other kingdoms in the state to look in that direction.

“But we will continue to support our children to the bursary scheme and look very favourably to instituting a scholarship scheme for a few of our gifted children,” Okowa said.

Earlier in his welcome address, the Ughievwen monarch, HRM, (Dr.) Matthew Ediri Egbi expressed appreciation to Governor Okowa for finding time to attend the ceremony, and lauded the governor for his developmental strides in the state.

He pointed out that Senator Okowa is a listening and a caring governor who had provided inspirational leadership in the state, just as he prayed God to grant him good health and resources that would enable him finish strong.

The monarch pointed out that a committee that would sensitise the people of Ughievwen Kingdom on the need to embrace agriculture has been put in place.

While appealing for technical and financial support to the Ughievwen agricultural programme, he also harped on the need for talented children in the state to be assisted educationally through scholarship scheme, even as he spoke on the peace effort in the area.