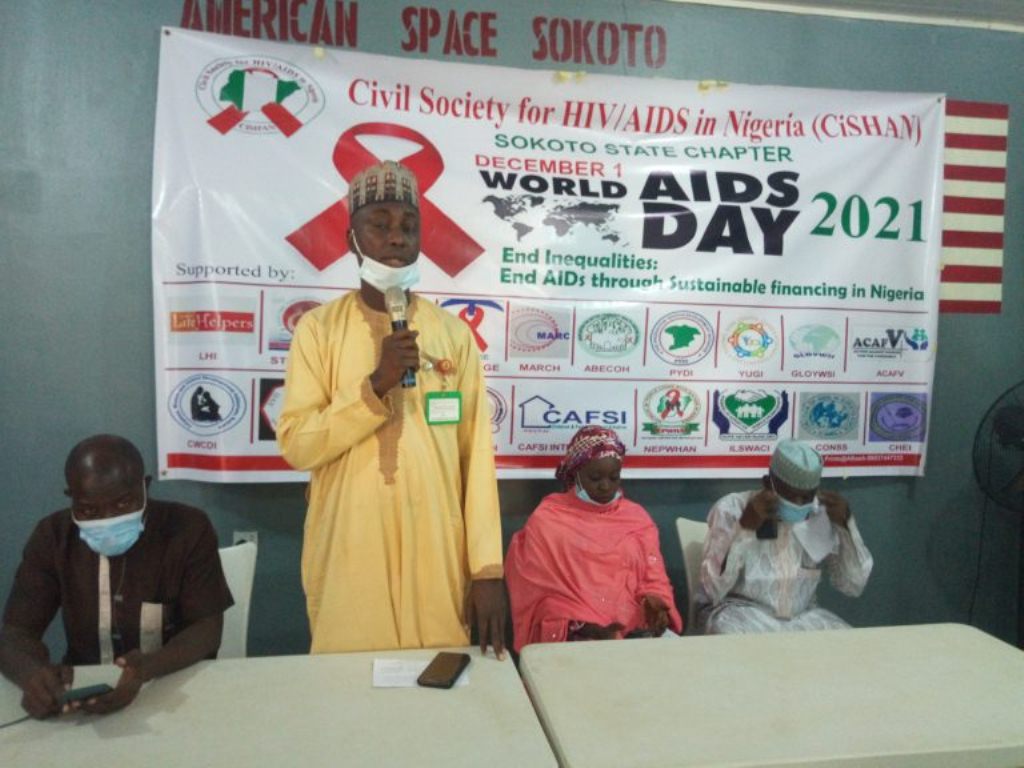 Mr Muhammad Garba, the Acting State Coordinator of Civil Society for HIV/AIDS in Nigeria (CiSHAN), Sokoto State Chapter, disclosed this at a press conference in commemoration of 2021 World AIDS Day (WAD) on Wednesday in Sokoto.

Garba said the state prevalence rate is 0.4 per cent, according to the 2018 Nigeria HIV/AIDS Indicator and Impact Survey (NAISS), noting that the reduction in prevalence follows concerted efforts by state and non-state actors within the state.

He explained that the new cases of infection have been identified and the patients enrolled into treatment care and support.

”This figure is not inclusive of people who go to private hospitals and laboratories for HIV test in the state.

”In line with the 2021 theme ” End Inequalities, End AIDS through sustainable financing in Nigeria”, CiSHAN urges government to take ownership of the response through the implementation of HIV sustainability plan developed by Sokoto State Action Committee on AIDS and Tuberclosis (SOSACAT) with support from Chemonics International.”

He further called for the constitution of SOSACAT board with was absent for about eight years and provide it with necessary supports to function effectively.

The Acting Coordinator appealed to government to ensure prompt approvals and release of funds and intensify efforts by media as well as community organisations for awareness.

In his remark, Malam Bashir Hassan, the North West Coordinator of CiSHAN, said World AIDS Day (WAD), celebrated on 1 December annually, seeks to refocus the world on the AIDS pandemic and the people living with or affected by HIV globally.

Hassan noted that the day is also to remind people of the importance of access to HIV testing, prevention and treatment, as well as a bold action against inequalities.

“We know COVID-19 pandemic has ravaged the entire world. However, the foundation is drawing attention of the public not to forget that HIV has been with us for the past 40 years.

“Economic, social, cultural and legal inequalities must be ended, if we are to end AIDS.

“We also need sustainable financing in achieving the academic control of HIV and AIDS, and we are confident that if we all put our efforts together, globally we can end it,’’ he stressed.

He further appreciated the effort of the government, partners and funders who have made it possible to place many people on treatment around the world and those receiving lifesaving drugs.

”We advise everyone to get tested, especially the youths, ho need to stop indulging in risky behaviors, take charge of their lives and protect themselves,” Bashir said.

The representatives of various NGOs and other coalition members attended the event, which featured questions and answers on various issues in relation to stigma, treatments and other challenges on the struggle against HIV/AIDS.