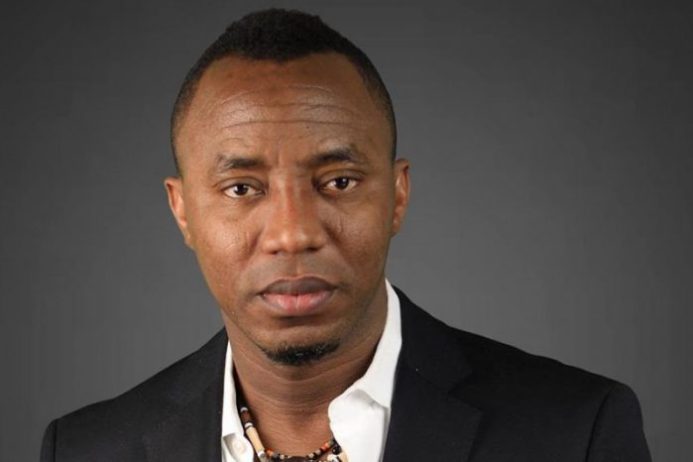 Omoyele Sowore, a Presidential hopeful and Publisher of controversial online media, SaharaReporters has said that he will abolish the Nigerian senate and make House of Representatives a part-time to reduce the bogus salaries and allowances members of the National Assembly received to the detriment of the country’s economy.

Sowore spoke at Owerri, Imo state capital on Friday while addressing mammoth crowd of youths and women who gathered at the Newton Hotels, Owerri to give his presidential ambitions a boost.

He said that if voted into power comes 2019, the Nigerian workers, students and the youths would have taken back Nigeria of their dream, saying that Nigeria democracy must hit a landmark next year when the young people take over Mantle of leadership.

Sowore said his administration if given the mandate will increase minimal wage from current N18,000 to N100,000 for workers, youth corpers will also be paid N50,000 while unemployed students will get a dole of N50,000 to help sort out their school fee so that they are not denied final result.

Hear him, “The workers will be paid 100,000 as minimum wage. We have been working on the calculation of how many students we have in higher institutions. Can you believe that the Nigerian University Commission does not know how many students are in our higher institution? They don’t know. But we have figured it out and we want to invest N50,000 each on every student so that when you cannot pay your school fee, you’re not denied your final result. 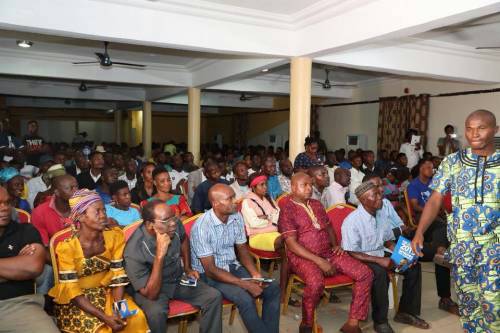 “Our youth corpers will also be paid N50,000 as allowance instead of giving our money to those useless senators who are paid N13 million per a senator who are the bunch of laziest thieves you can find in the World. If I have my way I will abolish the Nigerian senate, is a waste of time, waste of our resources. And will have just one House of Representatives per a local government and will make it a part-time, if you don’t come to work you won’t get paid.”

Mr. Sowore, assured the enthusiastic young generation that there is still hope, adding, “We are leaving the Egypt and no longer going back to the Egypt, we have left them and power has also left them. We are going to take back our country from them. Analog mentality cannot rule digital generation. I was a student union leader in University of Lagos and we mobilized against military rule in 1999. 2019 would have been twenty good years we drove military away and had democracy.

“Our democracy must hit a landmark next year when the young people who have been fighting for this country will taste power for the good of Nigeria. There is a vacancy in Aso rock, power has left them and we are taking it back. We are tired of turn by turn politics in Nigeria. Enough is enough we tired of divisive, ethnicity and religion politics.”

Sowore who however took a swipe at President Muhammadu Buhari over his recent London comment that Nigerian youths were lazy and only wait for free oil money, told the youths emphatically, “We are not lazy, they are the ones who are lazy and if you look very well they never worked in their entire lives, they steal, loot and destroy our country. What about what happened to our president’s son who has never worked before. 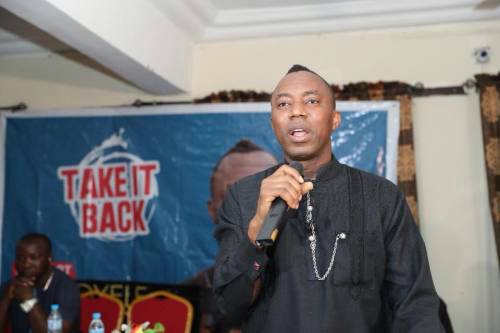 “Where did he get the bike he was riding in Abuja and had an accident.? Somebody who has never worked before and they used our money two hundred and fifty thousand dollars to ferry him from Abuja down to Germany for treatment and he came back and his father has the effrontery to be calling us lazy. We are nice people because if you do this to young people in other countries, they will shut down the country.” Sowore said.

The firebrand activist, while saying he has been around since forty-seven years and each time an opportunity to vote comes, the wrong people have always been voted for even as he made it known that he is most qualified and experienced.

“The only experience they have is stealing, looting, corruption, assassination, nepotism and tribalism which they have continually used to deceive us. Its time to take back Nigeria. Somebody who has been a president since 1984, you think when he become a president in 2015 will still know what he is doing.? They don’t have the capacity to do better than they are doing. This is the best they can give us, they have nothing to offer you, but there is still hope come 2019.

“We have a duty to form our zone which I called zone seven which they called geopolitical zones, they are rotating power among those zones and we are creating own zone seven and power is not going to be rotated for us, we are going to fight for the power and take it back. Look at Imo state the man known as Sam Mbakwe built this state but since he died and left as a governor they can’t even maintain the roads he built. People who can not do new things and maintain the old ones are the people who are lazy not our Nigerian youths. That statement alone is enough to incite a revolution.

“You must go and obtain your permanent voters’ cards, (PVCs) and get set to chase away this corrupt and bad government come 2019 and install a government the youths can call their own. People tell us about the southeast that they want to leave this country, they want to restructuring and Biafra, we must address it. You are not the only people who have left this country, most Nigerians have mentally seceded from Nigeria because of injustice and the injustice is huge.

“We cannot continue to have people who have war mentality, they have not finished the war they started in the 60s that is while the Southwest and Southeast is broken down and they want it to remain so. They are still fighting the war in their heads. One of the first things we will do first as a Federal Republic of Nigeria next year is to apologize to the people of the Southeastern part of Nigeria. Nigeria must apologise to you for the injustices done to you, we must accelerate development of the Southeast. There’s money in this country to develop it. Within four years of coming into power, not only will we complete the second Niger bridge but will do a third Niger bridge with a fast train lane that can carry goods and services. Its possible and achievable.”, Sowore said.

Senate To Security Agents: You Must Block Omo-Agege From Gaining Access Into Senate Chamber Next Time