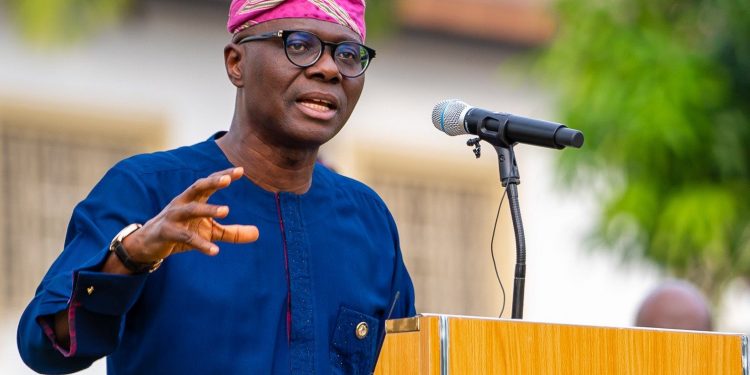 Two top police chiefs have been allegedly accused of land-grabbing in the Eti-Osa/Chevron Estate, Lagos State. This is coming as some landlords in the area petitioned the IGP after they chased away the owners of an 8223sqm landed property, and their workers from the site claiming they are acting on directives of the Governor, Sanwo-Olu, and IGP, Baba Alkali.

Allegations are rife that the Task Force Chairman, CSP Shola Jejelaiye who is the arrowhead in the land racketeering, is acting on the instruction of CP Abiodun Alabi to forcefully take over the 8223 sqm landed property.

Sources who are close to CP Alabi claimed that the man came to Lagos with clean intentions, but after he met Taskforce Chairman, CSP Jejelaiye, the CP’s ideology got changed as he apparently taught techniques of ‘killing fish with bullets’.

“CP Alabi will soon be initiated into land-grabbing runs since is the fastest way of making money and his days in Lagos were already numbered, and he will find Jejeloye, who knows how to turn innocent Lagosian situations into fortune, helpful in that regard, one of the concerned land owners said.

He further said, “CSP Jejelaiye is a police officer by day, but at night, he could best be described as a bandit as he is known for going to construction sites to arrest workers and detain them, using Lagos state government facilities, once he has gotten his pay from VIPs or top personalities who used him to forcefully claim lands from their owners.

“Using the Lagos State government as a cover-up, the Taskforce Chairman is a sharp dog to Lagos state Governor’s Chief of Staff, Tayo Ayinde, who trained him on how to claim landed property from their rightful owners, Jejelaiye has carried out several of such assignments perfectly.

He continued, “Jejelaiye would soon become Agba land grabber (a local name for an expert in land grabbing), that can never do any wrong so far he settles CP Alabi and carries him and others that could protect his interest before Governor Babajide Sanwo-Olu along.

Another concerned land owner said, “The combination of both the Police Commissioner and CSP Jejelaiye was not for the good of Lagosian and the dear state, after all, Alabi is from Ekiti, just as Jejeloye, an indigene of Kwara.

“Their mode of operation had often been that Jejelaiye would get information from VIPs that needed their services and then strike on the directive of CP who provides the dog with needed cover and protection.

“And presently, 10 fully armed policemen from both CP and Jejelaiye, are stationed on an 8223sqm landed property at Chevron alternative inside Empire Estate, they have chased away the owners and their workers from the site, and Jejeloye is claiming that he is acting on directives of the Governor, Sanwo-Olu, and IGP, Baba Alkali.

“Mind you, Jejelaiye is so good at dropping names since he knows that common Lagosian is afforded the right to investigate or take matters beyond their level.

Subscribers to the affected scheme designed for the landed property have started crying foul play, and some of them who have contacts in the Governor’s office got information that the Governor is innocent of the claims, an indication that both CP Alabi and CSP Jejelaiye are just running their package with governor’s name.

The subscribers are saying the owner of the property, whom they have paid, is tired as well as helpless and that he does not know who to speak to about the issues. Of course, it is embarrassing to just be chased away from your property in the name of Babajide Sanwo-Olu, the State Governor, who may not even be aware of their situation.

People who have subscribed to the scheme on the land said that the owner bought the property in 2021 at the rate of N300 million from the Ojomu family, with all documents duly signed by the King of the family and necessary parties. They said the place was sand filled with N275 million and that construction had taken over N298 million aside from filling which cost N160 million, and other miscellaneous of over N30 million on the site.

They said CP and CSP Jejelaiye claimed that they were acting on directives of the Governor’s, but it was discovered that both the CP and Jejeloye were acting on their own and protecting the interests of their client, learned from Jejeloye to be First Bank of Nigeria.

Who do people like these innocent subscribers and the owner of this landed property run, the land is not in dispute, but the two bad cops have collected settlements from private individuals who want to use the law enforcement officers’ influence to grab the land from the owner.

Another land owner said, “CSP Jejelaiye is a bad egg in police uniform; I don’t know why the Lagos state government is still keeping him. CSP Jejelaiye and other Policemen in the Taskforce unit are known for terrorizing innocent people across the state, the Governor needs to urgently take steps before things go completely bad, after all, elections are in less than 60 days away.

Or maybe, CSP Jejelaiye is giving good returns to someone else at the State House in Ikeja aside from CP Alabi and Tayo Ayinde who use him to their satisfaction, denying Lagosians their property.

Just weeks ago, the governor suspended a team operating as a land grabber due to the excesses and avoidable embarrassments the team constantly brings on the image of the state government.

The step has been described as a good move by many that have suffered heavily from the team earlier initiated by the government to end the menace of land grabbing but later became another monster to those they were expected to protect.

“CP Alabi looks more responsible than the mess he is putting himself in, but Jejelaiye should watch his back, senior colleagues are waiting for him to be redeployed from Lagos, as they have taken note of his atrocities but could not take necessary actions since the governor and his aides were presumed to be shielding him.

“Aside from Lagos state officials, CSP Jejelaiye’s course mate, orderly to Vice President, who has been protecting him at the Police Headquarters in Abuja, would no longer be in the Villa by 2023 June, and the fair in complexion Jejeloye may soon find himself as an orphan without a roof on his head, an angry land owner said.

REVEALED! Jonathan Will Rule Again As Head Of ING After 2023 General Election – Pastor