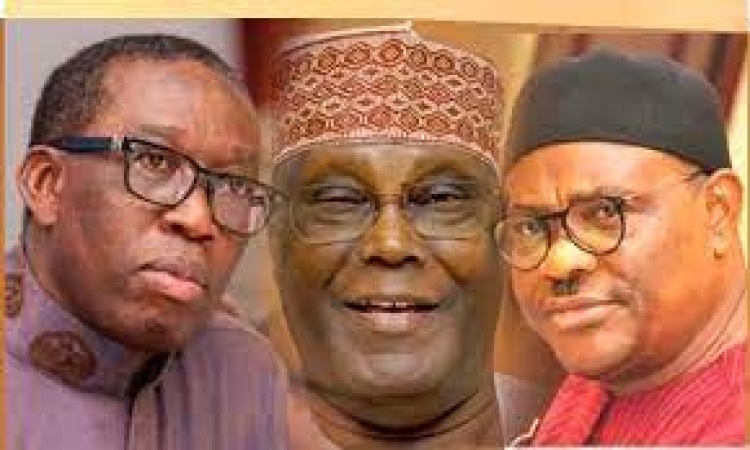 Supporters of the Rivers State Governor, Nyesom Wike, and his appointees on Thursday expressed anger over the decision of the Peoples Democratic Party’s presidential candidate, Alhaji Atiku Abubakar, to pick the Delta State Governor, Dr Ifeanyi Okowa, as his running mate.

Wike’s loyalists, who reacted shortly after Atiku unveiled Okowa as his running mate, dismissed the Delta State governor as a featherweight politician and warned that the decision would have implications for the PDP in the 2023 elections.

But supporters of Okowa and his appointees, in separate interviews with The PUNCH, described the Delta State governor as a politician, who would add value to the PDP presidential ticket.

Earlier on Thursday, the PDP standard-bearer, via his Twitter handle, @atiku, announced the governor of Delta State as his running mate.

He said, “I am delighted to announce Governor @IAOkowa as my vice-presidential candidate. I look forward to travelling our great country together, engaging with all Nigerians and building a shared future of peace, unity, and prosperity for all. As one, we can get it done. #OneNigeria. -AA”

The former Vice-President, who emerged as the presidential candidate on May 28, began the search for a running mate together with the leadership of the party by setting up a committee by the party’s National Working Committee on June 9.

The ad hoc committee, consisting of representatives of former governors, incumbent governors, the NWC and the Board of Trustees members, was saddled with the responsibility of recommending candidates for the vice-presidential slot.

The PUNCH had on June 9 reported that those who were lobbying for the slot included Wike, Okowa, and the Akwa Ibom State Governor, Udom Emmanuel.

Although there were reports (not by The PUNCH) on Wednesday that the committee had picked Wike, The PUNCH reported on Thursday that Wike, Okowa and Emmanuel were shortlisted by the panel.

At the PDP headquarters, Abuja on Thursday, Atiku said he picked Okowa because he had the qualities to be a President, adding that he “is a President-in-waiting.”

He said, “In arriving at the decision, I held wide consultations with various stakeholders in our party including our governors, the national working committee, board of trustees, and other leaders to seek their inputs and their wisdom.”

“In these consultations, I made clear that my running mate would have the potential to succeed me at a moment’s notice, that is, a president-in-waiting.

“In other words, the person must have the qualities to be President. The person must have an appreciation of the deep rot which our country has been put into by the rudderless APC (All Progressives Congress) government; understands the great suffering that most of our people are going through and the urgency of relieving them of that suffering; understands the critical importance of economic growth and development to provide our young people with jobs, hope, and a pathway to wealth.”

Atiku, however, noted that all the candidates recommended by the party were proper individuals to be his running mate.

But political office holders in Rivers State, in separate interviews with The PUNCH, criticised Atiku and warned that his decision would have implications in the 2023 elections.

The Chairman of the Ikwerre Local Government Area of Rivers State, Dr Samuel Nwanosike, stated, “There is a local proverb in my village that says nobody will tell a man that eats yam to go and drink water.

“If you are eating yam, you must look for water to drink because if you eat yam without drinking water, it will choke you.”

Nwanosike said although it was the right of Atiku to pick who would fly the party’s ticket with him, he said the former Vice-President did not honour his words to respect the decision of the party which set up a committee to choose a running mate for him.

He stated, “If he kept to his words like he said to go with the party’s overwhelming choice, then he would have respected the decision of the panel, the party’s national chairman and his team set up.”

Nwanosike claimed all stakeholders of the party recommended Wike as Atiku’s running mate.

On his part, a chieftain of the PDP in the state and former member of the House of Representatives representing Etche-Omuma Constituency, Ogbonna Nwuke, said Wike would speak at the appropriate time.

Nwuke, who was also former Rivers State Commissioner of Information and Communications, however, said by Atiku’s choice of a running mate, he did not reject Wike, but he rejected Rivers State.

“I believe that our leader will speak at the appropriate time. We are members and whatever decision he makes will be okay by us because he is the one wearing the shoe now. I think it is not Governor Wike that Atiku rejected; it is Rivers State he rejected.”

Also, the State Publicity Secretary of the PDP, Mr Sydney Gbara, in his reaction said the party in the state was not perturbed but remained united notwithstanding what played out in Abuja concerning the subject matter.

When asked if the choice of Okowa would not affect Atiku’s chances, he said it was left for the party’s leadership to handle.

At the state secretariat, various groups were heard discussing the issue, especially at a popular newsstand within the premises.

Also, Wike’s backers and others on social media faulted Atiku for picking Okowa.

A former presidential aspirant, Adamu Garba, said on Twitter, “The PDP made a strategic miscalculation. Wike, not Okowa, would have been better, given the current season.”

@UgoWilliams007 said, “What a combination. The PDP has gambled towards failure by pairing Atiku with a featherweight politician from the South. What are his achievements in Delta State? This points to a resounding victory for Peter Obi and Labour Party. It remains to be seen what APC will conjure.”

But in an interview with The PUNCH, the Chairman of the Warri South Local Government Area, Dr Michael Tidi, said the people of the state were unanimous in the celebration of Okowa’s nomination.

Also, the Senior Political Adviser to Governor, Funkekeme Solomon, said, “The choice is the product of a rigorous process that has been the hallmark of the PDP. Governor Ifeanyi Okowa has accomplished a lot in Delta State.

“Okowa will strengthen Atiku Abubakar’s candidacy and greatly improve his chances of clinching the presidency in 2023.”

The Assistant to the governor on Communication, Mr Fred Oghenesivbe, who described Okowa as a master of Southern politics, stressed that the choice of Okowa would add value to the campaign and possibly the governance in 2023.

“ The party not picking Wike will not affect its votes. The PDP weighs all options and characters before making Okowa the running mate.”

In a statement s by its Publicity Secretary, Dr Ifeanyi Osuoza, the state PDP said Okowa was picked after a rigorous and comprehensive process.

“It is most importantly, a tremendous call to service in the quest by the PDP to rescue Nigeria from the suffocating leadership of the All Progressives Congress in 2023

On Twitter, @gimbakakanda said, “This is a politically strategic ticket. Aside from Ifeanyi Okowa’s lack of glaring baggage, the choice of an ethnically Igbo politician from the South-South as running-mate is akin to killing two birds with one stone—appealing to the Igbo and the South-South at the same time.

@grace_igweh said, “Okowa is the bridge between the South-South and the South-East, he is the perfect match for VP because the mission is to rescue this country.”

On Facebook, one Bala Samaila said, “Okowa is better. He can even drag the power with Atiku Abubakar.”

Kenneth Edayi said, “Congratulations to Governor Okowa. With this perfect combo, victory is sure for our great party PDP.”

Also, the Edo State Governor, Mr Godwin Obaseki, in a statement on Thursday described Okowa as a brother, friend and energetic grassroots mobiliser.

On his part, a former Deputy President of the Senate, Senator Ike Ekweremadu, in a statement described Okowa as highly resourceful and prepared for the office of the Vice President.

A former National Chairman of the PDP, Prince Uche Secondus, in a statement by his media aide, Ike Abonyi, said with the choice of Okowa, the PDP had begun a journey back to the presidency.

The Chairman of the PDP BoT, Senator, Walid Jibril, said that the PDP was a party that was greater than any party in Nigeria, especially the APC.

Jibrin spoke with journalists shortly after the unveiling of Okowa as the running mate of Atiku.

Shortly after Okowa was announced as Atiku’s running mate, he was screened by a 13-man panel headed by a former Minister of Foreign Affairs, Chief Tom Ikimi.

In his acceptance speech, the Delta State governor urged all members to work for the progress of the party for positive results.

A political analyst, Shalom Olaseni, said Okowa as a vice president would better complement Atiku, adding that his legislative experience, as a former Senator, would be an added advantage to Atiku should he emerge.

Another analyst, Busari Dauda, in an interview with The PUNCH, said, “ Okowa will appeal to both South-East and South-South people, unlike Wike.”