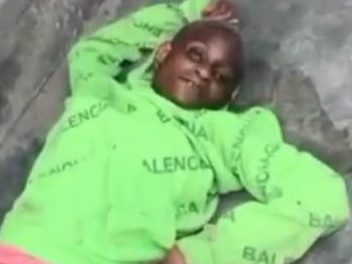 A lifeless body of a yet-to-be identified lady has been found at a plaza in Effurun, Delta state.

BIGPENNGR.COM gathers the lady was found lying dead at one Futeb Plaza, located by Refinery Junction, Effurun in Uvwie council area of the state.

It was learnt that the girl was found abandoned at the plaza by shop owners who resumed their business after the weekend Eid al-Fitr celebration.

She was wearing a tinted hair with a lemon sweaters and half-worn red checkered trousers when shop owners found her on Monday.

Sources suspect she was one of those sex workers who hang around the popular Delta Mall, Effurun.
The deceased, also appears as someone who was raped before being killed and dumped at the plaza by her assailants, one source at the scene said.
State Police Public Relations officer DSP Edafe Bright, didn’t pick his call when contacted and was yet to respond to a message asking for comments on the unfortunate incident, as of the time of filing this report.
18
SHARES
429
VIEWS
WhatsappShareTweetLinkedinTelegramSubscribe
Related Topics:
Up Next

I killed 3 Persons To Get Promotion To Have Free Food, Drinks, Women And Money, Says Cult Leader